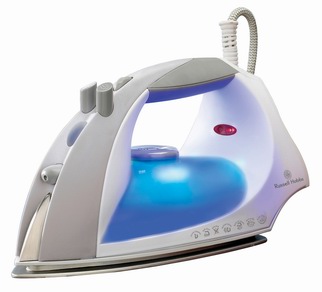 The Thermocolor RHTC101’s features and steaming capabilities proved that it definitely offers good value. Its design is a little clunky but its shot of steam was the most powerful tested.

Remove all packaging form the iron before use.

The main feature of the Thermocolor is its changing coloured lights that indicate the iron’s temperature. Initially a user may need the manual to decipher the meaning of the colours. Once this is understood the colour function is useful in determining the right temperature for particular fabrics.

On the cooler temperatures the iron’s water chamber is blue, indicating it is suitable for more delicate fabrics such as silk and nylon. As the iron heats up the water chamber turns green then pink for wool and polyester. On its hottest settings it turns red indicating its appropriateness for cotton and linen.

The iron performed well enough on nylon, cotton, denim and linen fabrics. However, the iron felt a little clunky to use and it was a little harder to manoeuvre than other irons we tested. The spray was a little misdirected as it covered a wide area of space. Its base felt heavy, which seemed to drag the iron when it was in motion. Its cord didn’t swivel out of the way very easily, and it sometimes got in the way when trying to rest the iron on its heel. However, the definite plus for this iron is its steam capability and no-drip performance. It delivered the most powerful shot of steam out of the irons tested. The shot was delivered immediately without the need for extra pumping and there was no water spotting, a trait that none of the other irons managed to do. Difficult ironing jobs were made simple with the steam function of this iron.Ã‚Â Also, when the iron was turned off and rested on its soleplate it didn’t leak any water, another trait none of the other irons managed to achieve.

The iron’s buttons use minimal words, relying on the user to determine the meaning of its icons. This hindered the usability of the iron, meaning a more than probable visit to the manual.

Luckily, the manual is clearly labelled and easily understood with short yet comprehensive instructions. Its cord wraps neatly around the base of the iron for easy storage.

In terms of cleaning, it wipes down easily but fabric did stick to the soleplate on a hot setting, which made cleaning more of a challenge.

Once the Thermocolor’s functionality is fully understood, the coloured temperature lights are definitely a bonus. The good price and superior steaming performance makes up for the iron’s slightly clunky design and not-so-smooth manoeuvrability.

Overall
Value for money
Ease of Use
Design
Reader Rating0 Votes
Water tank colour changes with the temperature indicating suitability for different fabrics, very powerful shot of steam, does not spot when using shot of steam, no leaks when iron is off and rested on soleplate
Feels a bit clunky to use, small water hole makes refilling a challenge, refill depends on small water jug provided, minimal words explain buttons? functionality
3.3