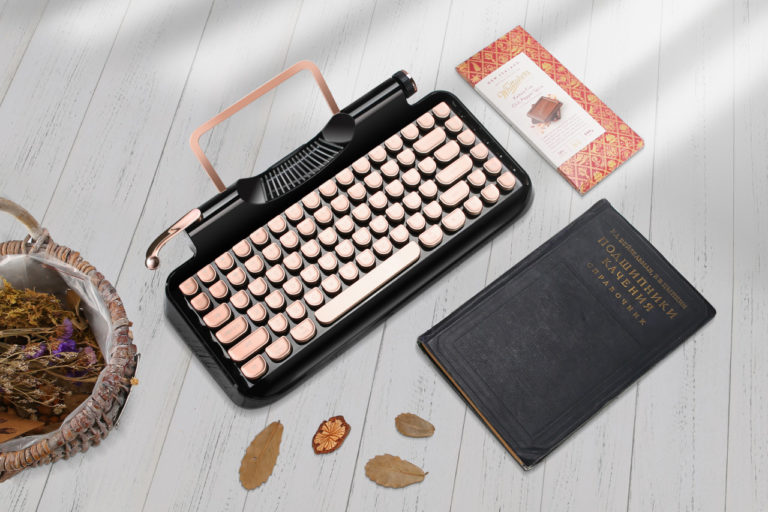 Retro is in. What about a keyboard that looks like an old-style typewriter? Enter the KnewKey Rymek – and it looks and feels like it is from the late 50s manual typewriter era.

Every so often GadgetGuy gets a device that brings squeals of delight and envy. The Rymek is just that. Everyone who has seen it wants it.

It’s launching on Indiegogo on 13 June. If you sign-up, you will get 40% off the price.

“Rymek is inspired by those typewriters in the late 50s,” said Ferdinand Hao, head of product design. “Under the hood, Rymek keyboard is an aesthetic composition which delivers the intense feelings of nostalgia; ultimately, it can present the highest-quality, on-demand analog typing for tech lovers.”

With the caveat that the review unit is an engineering sample and came without a manual, we discover the delights of this cool retro keyboard.

It works equally with Mac, Windows, iOS and Android. Ther are Alt/option and Cmd/Control keys – the later acts as the Windows special key. It also has Function keys f1-f11 that also act as internet launch, music control, and more. There is even a volume control built into the platten knob.

A removable tablet stand integrated into the rear of the keyboard will hold anything from a Surface Pro to an iPad with ease.

The connection is via micro-USB or Bluetooth.  The left return carriage lever initiates Bluetooth or USB. There are three Function/Bluetooth keys. We are not able to comment yet on battery life, but I expect it will last a few months once charged.

You can control the keys lighting in five steps. It illuminates the underside of the keys in up to seven patterns.

GadgetGuy is a major fan of mechanical keyboards – albeit they are noisy. There is something reassuring about a Cherry MX mechanical key that has a 4.5mm throw and 40g actuation (approx).

It is a compact keyboard – there is no numeric keypad and spread out keys. It does take a while to get used to the key placement. At first, my touch typing was off by precisely one letter to the left. After looking at what I was typing muscle memory became active, and accuracy and speed improved. It’s about 80% of what I achieve on a PC full-sized mechanical keyboard and will improve.

Keycaps are saddle-shaped helping every stroke to be accurate.

At 1.312kg it sits firmly on its nonslip rubber feet. Key angle is about five degrees off horizontal.

Would we buy the Rymek Retro?

We don’t know yet. It could sell for US$200, and it would be worth it. The Indiegogo launch will reveal more. Stay tuned for a full road test (once we get a manual).