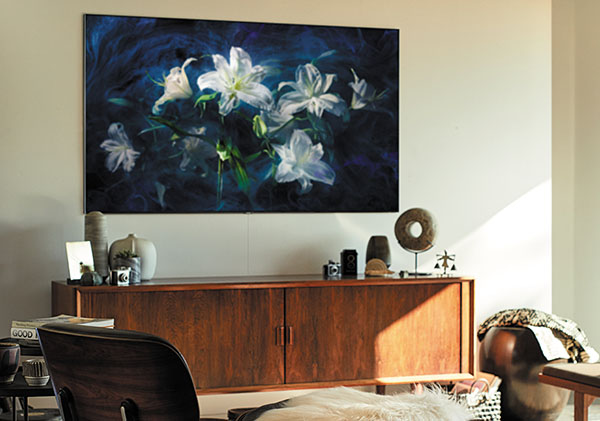 Following their showing in New York last month, it’s time for Australia to see the Samsung 2018 TV lineup. It’s an impressive offering. Overall, the TVs are bigger, blacker, and smarter. And for gamers, several are a lot faster.

Yes, this is a bit of a back to the future arrangement. We’ve been here before, but I don’t think we have seen this with QLED technology. Anyway, it largely addresses one weakness of QLED compared to OLED: the production of deep, dark, blacks. In the parts of the screen where the image is supposed to be dark, the backlight can be turned down or off. That can make it almost as inky black as OLED.

Of course, OLED can go full black at the pixel level … and there are eight million pixels.  These TVs’ grids feature up to 480 individual back lights, depending on the model. In my experience, the subjective results are much the same. Slightly weaker blacks aren’t really noticeable as such when they’re right next to bright areas.

And while these aren’t as thin as OLED TVs, they are still remarkably thin for an LCD TV with proper backlighting rather than edge lighting.

Samsung says that TVs spend eighty percent of their time switched off. Which makes for an unpleasant element in your room’s décor for eighty percent of the time. So it has introduced an “Ambient mode” across the ranges. This shows pleasing things on the screen – in a low power mode – instead of an ugly black rectangle.

Those things can include patterns and images that you’ve loaded into the TV, with overlays of clocks or weather details or other information. One of the cool features is that you can use your phone (Samsung only, it seems) to take a photo of the TV with its surroundings. The TV will create a matching pattern on its screen.

Also making things a lot prettier on some models is “One Clear Connection”. Rather than having the electronics and TV tuner and connections built into the panel, these come in a separate box. Then a single cable connects this to the panel. A single slim plastic cable.

This was kind of available in some models last year, but the panel still had to be plugged into a power point. This year the cable carries both the signal and the power. Again, in a slim cable. I measured it at 3.5mm thick. It’s largely transparent and quite flexible. If you’re wall mounting the panel you could score a thin channel into the gyprock, put the cable in that and plaster and paint over it.

I quizzed the Samsung people. It turns out that fibre optics carry the signal and four wire conductors carry power. Two are for a 13 volts circuit, and two are for a 350 volt circuit. There are of course suitable protections for a cut or other short circuit. Five metres of cable comes in the box, and fifteen metre lengths are available as options.

Why the high voltage? Remember, the higher the voltage for a given power, the lower the current. It’s the current that determines the thickness of the conductor.

Over the years there have been lawsuits when two major TV makers from one country have made specific – disparaging – claims about each other’s technology. These days they tend to be a bit more subtle. There is a ten year “No Burn In” warranty on the panels of the Samsung 2018 TV models.

“Burn in” is where an image stays on the screen after having been sitting there for a while. Watch something else and you can still see a ghostly remnant of what was on before. Clearly, Samsung is keen on ensuring people don’t worry about that if they are using Ambient Mode. But it is also a small slap at the competing OLED technology, which can in some circumstances suffer from burn in. (As an OLED user myself, I can’t say it has been a problem.) Samsung notes that “Quantum Dots in QLED TV are inorganic, this means colours remain pure at across range of brightness levels”. OLED, by contrast, stands for Organic Light Emitting Diode.

Samsung was one of the originators of the new HDR+ picture standard. This is like standard HDR – High Dynamic Range – except that it includes “metadata” which allows the range to be adjusted scene by scene. In that way, it’s a bit like Dolby Vision.

The practical result? From the user point of view, it should allow even better blacks and whites and in-betweens with suitable HDR+ content. Of which there is presently almost none. There some streaming material from Amazon, but that seems to be it for the moment. If you have any Dolby Vision encoded material – available on Netflix and some UltraHD Blu-rays (e.g. “Westworld”) – it will fall back to standard HDR with these TVs.

UltraHD TVs are slow. It takes a lot of work to match the incoming video to the eight-plus million pixels of the display panel. And that’s not to mention the picture improvements that are applied, such as motion smoothing.

So, how slow? The slowest one I’ve measured delayed the picture by more than 200 milliseconds. That’s two-tenths of a second. Typically they are around 120 milliseconds. But the TV delays the audio to match, so who cares?

Gamers, that’s who. An average person’s reaction time is around 300 milliseconds. Increasing that time by more than thirty percent is not going to improve anyone’s score.

Many TVs have a “Game” picture mode which gets cuts out a lot of the picture processing, speeding things up. These typically get the delay down to 50 milliseconds, or maybe a bit less.

And, finally, all the TVs feature Samsung’s smart interface. And now they’re compatible with Samsung’s SmartThings platform. That is, its integrated control system for the Internet-of-Things, and for your smart home.