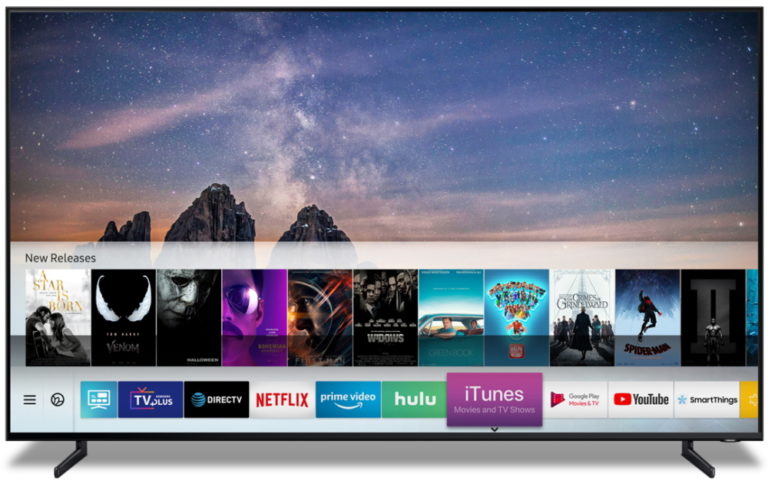 In a move that has shocked and amazed the IT community, Samsung 2019 smart TVs will support Apple iTunes Movies, TV Shows and AirPlay 2.

The target date is ‘first half of this year’ via an over-the-air firmware update that will also include selected 2018 models as well. There is no reason to hold off buying Samsung 2019 TV.

As the global leader in television for 13 years, Samsung Smart TVs and its Tizen based operating system have grown to become one of the largest global entertainment ‘platforms’ available on the market.

With AirPlay 2 support, Samsung customers will be able to play videos, photos, music, podcasts and more from Apple devices directly to Samsung Smart TVs. There has been no mention of Apple Music access – we suspect not in a similar manner that Sonos cannot.

It needs to control content to its devices and cash in on the amazing advertising revenue currently lost to Netflix, Amazon Prime, Stan other Internet streaming services. Apple can now enter this market because other streaming providers have beaten the content suppliers into submission, just as Apple did in 2007 with the introduction of 99 cents music tracks.

It has amazed the IT community because Samsung and Apple have at times been bitter enemies, accused each other of plagiarism and yet Samsung has a business relationship with Apple to supply key components like memory and screens for iPhones, iPad and more.

Why is Apple opening its ecosystem – is the walled garden coming down?

While it is unheard of for Apple ‘services’ to run on non-Apple products Apple’s CEO knows that services generate more revenue for less effort. While iPhone sales are plummeting, services revenue – what they make from each iPhone user is skyrocketing. It makes sense for Apple that don’t make TV sets to open this up to other devices, even if it is at the expense of Apple TV boxes needed to access Apple content.

Competition is good and Android needs iOS as Windows needs macOS – the real intellectual property is in the OS – not the hardware. It’s a shame Apple didn’t realise that a long time ago instead of producing what many consider overpriced and in many respects under featured devices reliant on loyalty from its walled-garden users.