Samsung 2021 TV range – bigger and brighter than ever 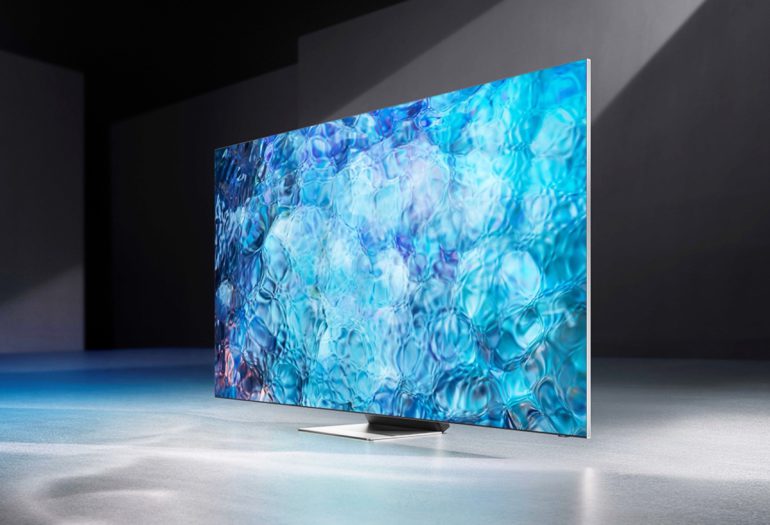 The Samsung 2021 TV range comprises ten models and a choice of 45 sizes ranging from 32” FHD to 85” 8K Neo QLED. They should be available from major retailers as you read this.

GadgetGuy saw the Samsung 2021 TV range at the launch (4 March) and was impressed. There is something for everyone. Of course the proof is in the pudding when we review some models.

Yes, there still is a demand for a small 32” for bedrooms etc.

Where normal backlights use large bulky LEDs, the Mini-LED is 1/40th the thickness. Using thousands of LEDs and perhaps hundreds of dimming zones, Samsung has taken a step closer to matching OLED – deep blacks, higher brightness, and a pretty fabulous picture.

It is bright, the blacks are closer to true black, and the 2021 image processor can handle far higher AI upscale rates (six neural pipes versus one). Then there is the new thinner panels, flush mounts, and Slim One Connect Box with HDMI 2.1 and eARC capable of 4K@120Hz and <6ms response times. Sound-wise the TVs have up to 4.0.2 speakers, Object Tracking Sound and room calibration.

We also saw a new solar-powered remote. It is far lighter as it does not need batteries and charges from normal room lighting. Samsung also mentioned new eco-friendly packaging.

The big elephant in the room is Samsung not supporting Dolby Vision. It believes HDR10+ will eventually win out over Dolby Vision. When you play Dolby Vision content, it downscales to HDR10 – not 10+.

The entire range can use Wireless DeX (Samsung’s excellent desktop experience using selected smartphones and tablets) to show a ‘Window’s like’ desktop (with keyboard and mouse) that allows you to run DeX compatible apps like Microsoft 365 cast to the device.

At the top is the Q950A, an 11.1.4 Dolby Atmos soundbar. The improvement over last year’s model 9.1.4 is the 2.0.2 rear speakers. These have side, front and upwards-firing speakers to add the extra 2 side channels.

These also have Q-Symphony tech, syncing audio from the Samsung TV to deliver enhanced 3-dimensional sound. The soundbar also calibrates to the environment to project audio. They also support Google Assistant, Alexa and Bixby.

We will report more on the soundbar range later.