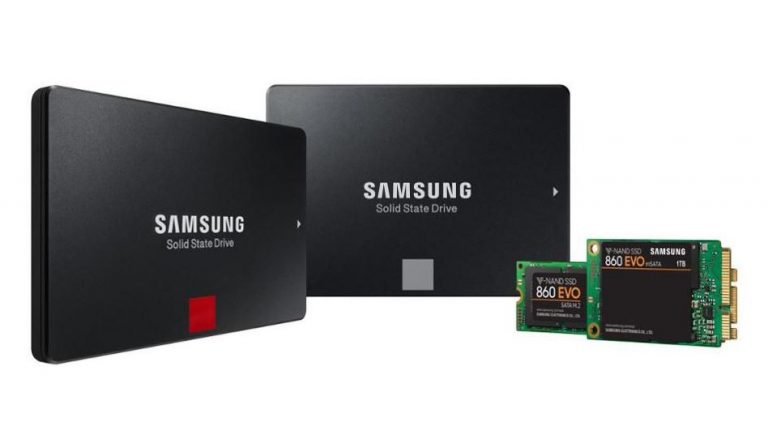 Samsung is a global leader in V-NAND memory technology and has released the updated 860 PRO and EVO SSD (solid state disks). They are fast.

In comparison with its first generation 850 PRO/EVO they are only marginally faster but use a 64-layer V-NAND coupled with an LPDDR4 buffer and new MJX controller to deliver up to 560/530 MB/s read/write speeds.

I tested both drives – a 2TB 860 PRO and 2TB 860 EVO using both a USB 3.0 to SATA6 interface dongle (external drive) and in late model ASUS desktop that supports NVMe and SATA 6Gb/s.

The difference between the PRO and EVO is small.

In summary, the PRO is supposed to be for professional use, and the EVO is aimed at consumers.

Documentation does mention a retail version with the USB 3.0 to SATA adaptor and screws!

Installation is straightforward. In Windows, launch Administrative Tools, Disk Management, allocate a volume and do a quick format.

By comparison, I tested the new second generation Crucial MX500, and it was marginally slower on the same files.

These are spectacular results but not hugely above their predecessors or competitors. Where they are better is in the file read/write with a mixture of file types and sizes – where some files are compressed, some are video etc. Frankly, the drives could be much faster, but the SATA 6 interface tops out at 600MB/s in theory anyway.

I cloned an existing WD Blue 1TB boot drive to the EVO. Using the EVO as a boot drive reduced a complete boot from 68 seconds to around 18 – instant on!

Ironically the documentation mentions Samsung Magician Software for drive health checks, firmware update, and secure erase but the current version does not yet support the 860 series.

As a drop-in replacement for a hard disk you cannot beat the 860 EVO or PRO – but if you can bag a bargain on the older 850 range don’t pass that up either.

True that you can get a 1TB spinning disk drive for under $100, and a 1TB EVO will cost closer to $400 but the age of spinning disks is over – if you want fantastic boot speed, application performance, responsive games, and large file manipulation then the 860 PRO and EVO are for you.