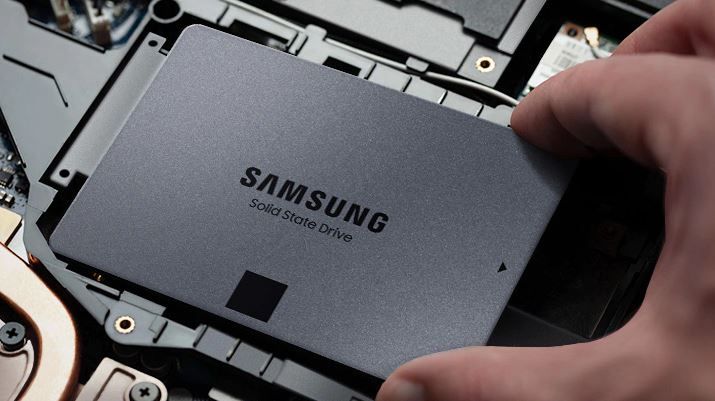 To get techy, the Samsung 870 QVO can store 4-bits of data across 15 different threshold voltages, and 3D memory is stacked on top of itself to save space. QLC is a little slower than earlier types of 3D V-NAND. QLC is the next step to narrow the gap in price between SSD and spinning hard disks.

There are some arguments that QLC is slower and less reliable than Multi-Level Cell (MLC), but the doubters said that about MLC when TLC was the go. Suffice to say that Samsung offers a three-year warranty, and large DRAM and SLC caches so that is not an issue.

SATA 6 means 6Gbps which sounds high but is really 750MBps in a half-duplex mode (one way at a time) mode. The interface maxes out at around 500MBps sequential read/write. Samsung says the 870 QVO offers best-in-class sequential read/write speeds of up to 560/530MBps. That is all you can get from SATA6.

To achieve that the 870QVO has 1TB/1GB, 2TB/2GB, 4TB/4GB and 8TB/8GB of high-speed LPDDR4 SDRAM as a cache. It is a Samsung MKX Controller can also dynamically allocate QLC V-NAND as extra SLC cache. In this case 1TB/42GB, 2TB/78GB, 4TB/78GBN and 8TB/78GB. So as long as the DRAM and SLC cache do not overflow these have great internal performance.

GadgetGuy has not yet tested these as they are coming between July and September. But we have read a few early reviews of the 1TB model. Tests indicate that its similar in speed to its predecessor the 860 QVO, so the advice is that unless you need 8TB then a 1, 2, or 4TB 860 QVO using TLC V-NAND is just as good and probably less costly.

Here is our guide to a clean install of Windows or a clone install.