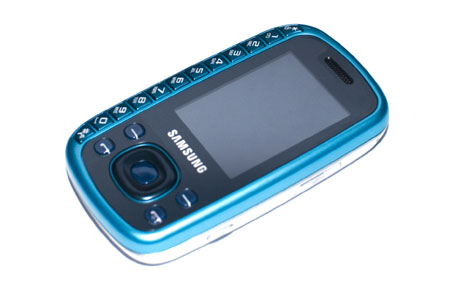 The B3310 handset is small and chunky. It’s just 1.7cm thick, nicely lightweight and, in case you doubted its core purpose as a texting device, sports a full QWERTY keyboard beneath its slider mechanism. Voice calls are more expensive than texting, so canny cash-strapped teens are choosing keypads and keyboards as their key interface for communicating with peers, either via email, Instant Messenger or SMS.

The face of the B3310 is equipped with a 2 inch 262,000 colour screen with a directional pad and four soft buttons underneath. It is, to immediate appearances, a conventional presentation, except for the numeric keypad, which is where things go a little awry. Instead of being displayed in the traditional arrangement – four rows of three columns – the numbers are listed vertically down the front of the phone.

It’s an unusual approach, and one we suspect will take users some getting used to.

Samsung has also included a messaging mode called “Conversations”, which provides threaded messaging very similar to how messages are presented on the iPhone. Speech bubbles from either side show text messages and phone call logs in a way that’s pleasing on the eye.

Connectivity is pretty basic, with only GPRS-speed web connections provided by its GSM (quad-band) support. You do, however, get Bluetooth and microUSB connections to work with. The microSD slot is located under the battery and can support up to 8GB. You can fill this with photo and video captured by the B3310’s two megapixel camera, or music in MP3, AAC or WMA format. Additional multimedia functionality includes FM radio support, plus a “Find Music” feature that lets you record part of a song you hear playing and then sends the title and artist information back to you.

The handset comes in grey and green finishes and is available only on the Optus network for $149.

The B3310’s interface reflects its intended audience, with a playful font that resembles the curly, wispy lettering a teenager in love might doodle in the middle of class. That same teen might feel the urge to jump onto Facebook or MySpace – probably both – and that’s catered for with icons for both presented on the home screen. There are also icons for “Create Message,” “Inbox,” and “Organiser”. Other social networks, such as Flickr and Friendster, can be accessed by hitting the menu screen and jumping into “Applications”.

Sadly, if you’re a Twitterer, there’s no love here.

Two sets of soft keys are provided – one for use when the handset is in portrait orientation, the other for landscape – making the B3310 seem just that extra bit more complicated. It takes time to become accustomed to the different sets you need to use in different orientations, as buttons are marked only with straight lines.

In portrait mode, the buttons above receive call and hang up are pretty straight forward: these have been soft buttons for years. But switch to landscape mode and your soft buttons are before the “Q” and after the “P”. These keys aren’t directly under the screen – that weird vertical keypad is – making it that much more likely you’ll press the wrong button.

That same troubled design can be found when flicking through messages in portrait orientation, with the asterisk and hashtag buttons. In landscape, these are left- and right-most. In portrait, these just feel silly.

As a device designed for texting, you’d expect typing on the B3310’s keyboard to be a doddle, and even though the buttons are close together it’s easy enough to hit the right keys, even if you have fat fingers. The backspace feels like it’s in the wrong place though, sitting next to the “return” and occasionally messing up the flow of messaging. Strangely, the top row of numbers (which is also your vertical number pad when held in portrait mode) actually makes it easier to key in phone numbers.

The two megapixel camera is a feature on par with other handsets in this price range, and takes adequate pictures.

The Samsung B3310 is aimed squarely at the teen market and is competitively priced at $149.

A QWERTY keyboard typically adds significant premium to a mobile handset, but Samsung has achieved it in the B3310 for a budget of $149. This price is sure to appeal to young adults (or parents thereof), as are the B3310’s targeted social networking features.