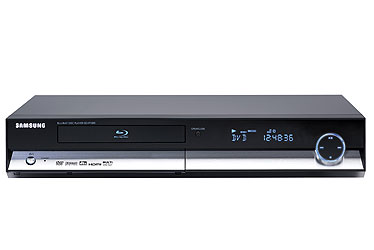 It has been a long time in coming, but at last we have had a chance to install a Blu-ray player, the Samsung BD-P1000, into the office, and see whether it is all that it’s cracked up to be. And yes, it is… almost.

Naturally Samsung wanted the player to be seen in its best light, so it included the LA46F7 LCD TV for us to use with the player.

The best way to get high definition from a player to your display is using a HDMI connection, so the Samsung BD-P1000 has one, along with a set of component video outputs. On HDMI, the signal can be output at full 1080p (progressive scan) resolution, while component video is limited to 1080i (interlaced). There are also composite and S-Video outputs, but these work only with DVDs, so there is no point using them.

The BD-P1000 works best delivering the audio via HDMI, but it also has optical and coaxial digital. Plus there is a set of 5.1 channel analog audio outputs to decode the latest surround standards provided by Blu-ray.

The instructions say that the BD-P1000 will play back DVDs, CDs and, of course, Blu-ray (BD) discs. But only BD-ROMs (ie. pre-recorded movies). It explicitly says it will not support BD-R or BD-RE (recordable and rewritable BDs respectively). It also says that while it will play DVD-R/RW discs, it won’t play DVD+R/+RW discs, but I had no difficulties with the latter.

There are also a couple of flash memory slots for showing your digital camera photos. The scaling on these was good, but they were ever so slow to load and display.

The LA46F7 TV has true high definition resolution: 1920 by 1080 pixels. That makes it a good match for a Blu-ray player. Of course it has HDMI support (two inputs in fact). It has only an analog TV tuner, which the large 117 cm display shows up at its worst, so you would be wise to buy an external high definition digital TV tuner to go with it.

The BD-P1000 does not provide an option to switch off HDMI audio output. Instead, you choose ‘bitstream’ or ‘PCM’ for all digital audio output. If you want full Dolby Digital or DTS surround from your home theatre receiver, you have to leave this set to ‘bitstream’.

One of the home theatre receivers I used during the test didn’t have HDMI inputs, so I had to connect the BD-P1000 to it via coaxial digital audio, and the HDMI output of the player direct to a home theatre projector. But HDMI connections pass information about the audio capability of the display device. So the BD-P1000 detected that the projector couldn’t accept bitstream audio. Consequently, whenever I inserted a DVD or BD and started to play it, and sometimes just during chapter jumps and the like, a large warning message would flash up on the screen saying that the display cannot handle ‘bitstream’ audio. This wouldn’t be necessary if you could just switch HDMI audio to ‘off’.

But how did it look? I used the BD-P1000 with both the Samsung LCD TV, and a 720p LCD projector. The fact is, it looked great with both.

The picture was beautifully coherent, and with a sharpness that made DVDs look positively fuzzy. Using the projector, the MPEG artefacts that were sometimes apparent with DVDs were completely absent with BDs. Even the Dolby Digital sound seemed better, thanks to the greater 640kb/s bit rate of some BDs.

But it doesn’t skimp on DVDs either. The de-interlacing of the BD-P1000 on PAL DVDs was, well… how do I put this? Magnificent! Superlative! Among the best I’ve ever seen!

The unit clearly uses some form of high end video processing circuitry, because it produced top-notch picture quality with all DVDs. With one exceptionally difficult test, interlaced text scrolls across the bottom of a progressive scan movie. Most DVD players will either show combing on the text, or bob the action in the movie causing visible moire patterns and lousy resolution. This did neither, presenting both elements of the picture to their best effect.

The only oddity on this front was that when I paused the video, film-sourced DVDs showed jagged edges on diagonal lines, something which almost never happens with DVD players. Weird! But that is a tiny price to pay for the exceptional moving action performance.

But there was one problem. The test BDs, supplied by Sony Pictures Entertainment, were exact replicas of the US versions. Consequently the video was delivered at 60 hertz, rather than the 50 hertz to which we are accustomed from Australian DVDs. The BD specification provides that the video from such BDs can be delivered at 24 frames per second in progressive format, but this player does not offer that option. Consequently camera pans and some movement were rather jerky. Samsung should provide a 1080p24 output mode in addition to the 1080p60 and 1080p50 modes currently included.

In terms of usability, the player was quite good. My only significant complaint was that when you switch it on, it is extremely slow to open the tray to load a disc (27 seconds). Once it finally does and you insert a disc, it commences playing after about 25 seconds, which is about the same time as a moderately slow DVD player.

The remote control offers plenty of fast-forward and fast rewind speeds, and also frame stepping. Even though both forwards and backwards keys are provided for this, with BDs it will only go forwards.

The pop-up menu was excellent, and if you select a special extra to play during the course of the main movie, at the extra’s conclusion it returns you directly to where you left the movie.

The TV provided excellent performance as well (tuner aside). The screen offered very good black levels for an LCD TV, although it was a touch uneven during full-black test signals. It was wonderfully sharp and, with Blu-ray source material, incredibly detailed. So much, that I was often tempted to sit within a metre of the screen just to get a wide angle of view. However its merciless exposure of detail of less that perfectly encoded DVDs could make viewing a trifle uncomfortable. For those discs I preferred to sit further back.

Blu-ray is exciting, and the Samsung BD-P1000 is an excellent introduction to it. I would just implore Samsung to upgrade the unit to provide 1080p24 output.

Overall
Features
Value for money
Performance
Ease of Use
Reader Rating0 Votes
Excellent support for high definition video via Blu-ray. Better performance with DVDs than most DVD players.
The Blu-ray player needs a 1080p24 output mode to eliminate jerkiness in pans. Should be able to switch off HDMI audio output.
4