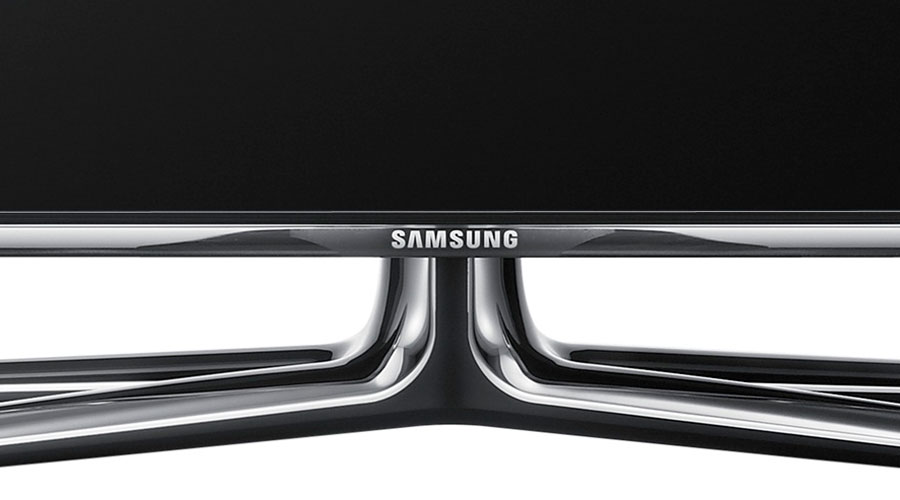 Of Samsung’s 2011 line up of TVs – and there are 44 different models – most focus on two advances over last year: better 3D with more 3D models, and TVs which are ‘SMARTer’.

As we shall see, the Samsung UA55D7000 TV also offers some nifty styling advances.

As the name implies, this is a 55 inch (140cm) TV. It comes with a neat swivel stand in the box. I approached it with a little trepidation, because 140cm TVs must be heavy. Wrong! This one weighs only 16 kilograms, or 18 with the stand. It is also very slim: just under 30mm thick.

The low weight is new, but the slimness is not new. What was new was the width of the bezel – the casing surrounding the screen area. This was in two sections: a 5mm black part which is in turn surrounded by a 9.5mm transparent part. The function of this seems to be only for additional strength since it covers nothing.

In addition, the bezel is perhaps 2mm from the edge of the picture proper. Nonetheless, the total width of the TV body surrounding the image is very thin indeed. The result is a picture that largely floats in space.

When it comes to features, this TV has them all. Three dimensions, of course. You get one set of 3D glasses with the TV. These are synchronised to the TV by means of Bluetooth rather than the more common infrared. It supports Blu-ray 3D, plus the side-by-side and above-and-below 3D broadcast formats (in which the two separate eye images are stuffed into single frames). It also has its own 2D to 3D synthesiser to allow you to experience 3D even in the absence of suitable source material.

It has full high definition resolution. It has a HD digital TV tuner (and, just about unnecessarily now, an analog TV tuner). It has a USB socket into which you can plug a hard disk to record TV programs.

And it has both an Ethernet and wireless networking built in, along with a host of network features under the title ‘Smart Hub’. We’ll look very closely at that shortly.

Samsung tossed in extra sets of a couple of different models of 3D eyewear, in addition to the single basic model included with the TV, and the advanced QWERTY remote control.

Obviously we here have been watching Samsung TVs for quite a few years now, and indeed they have been our favourite LCD TVs for about the same amount of time. This one turns out to be the best of them so far for a range of reasons. But the primary reason is refinement. Some stuff has been added since last year (especially in Smart Hub), and some noticeable improvements have been made (especially with 3D). But in a way it’s the little things that make this an excellent TV.

First is that most functions operate in a snappy way, rather than lagging behind key presses on the remote control. Second, everything operates more smoothly, including the menus and information screen which rapidly fade in and out, rather than just pop instantly onto the screen. It’s a small thing, but it looks cool.

And then there are the little extras. At the bottom right of the screen, at the back, is a vertical column of manual controls (in case you misplace the remote). Think: behind the screen. Which button should you press? Do you crane your head around into a possibly limited area to see which one to hit, or consult the manual?

With this TV you lightly brush your fingers over the keys, and a picture of them, with labels, appears on the screen directly over where they are. That’s thoughtful.

Previous Samsung TVs were pretty powerful in their connectivity features, but these tended to be scattered over a number menus, grouped under a series of names. That’s been changed. It is all now ‘Smart Hub’. Press the ‘Smart’ key on the remote and the full range of features are presented. Samsung ‘apps’ are shown along with various network-based video sources, the access points for videos, music and photos from either USB or the network.

Most of the ‘apps’, which include a number of games (Sudoku anyone?) are shown under categories, and are installed from the Internet simply by selecting them. Some pre-installed apps include YouTube and Skype (you’ll need to purchase the optional camera/microphone gadget for this). There are ‘Game Analysers’ for AFL and NRL codes. These show entire selectable games, or you can choose from time-lines such things as goals or behinds or tries scored, penalties awarded and so on. Pick one such from the timeline and the video shows that specific event.

There were so many apps from which to choose, I went boring and installed Google Maps. It took a few seconds only, and then showed a map of my suburb with my house marked as quickly as I could key in the address. You can go beyond apps by entering the full web browser.

Text is entered SMS-style via the remote’s numeric keypad. Alternatively, you can purchase for $99 Samsung’s QWERTY remote, which has a keyboard on one side (which connects via Bluetooth) and regular IR remote on the other. Whichever side is downwards is disabled to make sure unintended keys aren’t fired. There is also an iPhone/iPad app for this purpose.

Bigpond TV and Bigpond movies are supported as well. The former is generally free, while the latter streams movies for a modest cost. If you use Bigpond as your ISP, these Bigpond features don’t draw upon your monthly download limits.

The Social TV feature shrinks the TV picture a little – it can be an external input rather than the built-in TV tuner, if you like, so you can have a Blu-ray movie running – and runs your Twitter or Facebook feed (you register your logon with the TV) to the side. There are three different display modes for this to make things easier.

As a TV, this one conforms to Samsung’s usual high standards. But only after you change a couple of defaults. The standard picture mode had the Sharpness control set to 50. This should be reduced to 0, and Edge Enhancement under the Advanced Settings picture menu should be switched off. The defaults left the picture looking edgy and a little artificial.

The TV also by default had the Motion Plus video processing switched on to ‘Medium’ level. This is one of those motion smoothing processors, which creates new video frames between the signal ones. This implementation tends to make the picture look rather glossy and artificial. I preferred that one off as well.

Those changes made, the picture quality was excellent, with deep blacks and beautiful, accurate colours. Only in a dark room showing images with deep black screen and small bright foregrounds was it possible to see black imperfections: a slight grey/black mottling around the edges of the picture due to uneven lighting.

The 3D performance was a least a full generation better than last year’s Samsung models, with ghosting or crosstalk (which is where content intended for one eye is leaked into the other) reduced to barely perceptible levels. In other words, you see it if you look for it, but most of the time you just don’t notice it at all.

Samsung UA55D7000 3D LCD TV is not only a marked improvement over last year’s model on every front, it is also nearly 15 percent lower in cost, is more than 25 percent lighter, and uses nearly 25 percent less power. What’s not to love?