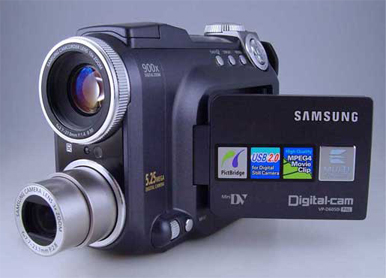 One of the biggest problems in trying to redesign the camcorder is that the conventional shape, while not particularly inspirational, is incredibly functional. Over the years camcorders have come in many radical designs and shapes, but by far the majority of camcorders sold retain the traditional shape. Sure, I like radical designs, but in the end I always seem to gravitate back to the familiar.

Samsung?s designers seem to have come to the same conclusion when working on the Generation III version of their dual lens camcorder. The Generation II model DuoCam used an ingenious twisting lens barrel to move between camcorder and camera functionality. This gave the camcorder an unusually long body and made the move from one lens to the other somewhat cumbersome.

The new D6050i uses the more conventional camcorder shape, although the dual lenses at the front still tend to make it stand out in a crowd. I found the new DuoCam shape gave the camcorder better ergonomics and certainly made it easier to hold for extended periods. It also means that the camcorder/camera functions and buttons are more easily accessible.

The important thing for most users is that the DuoCam continues to successfully merge both still and video functions in the same package. Samsung’s logic with the DuoCam range is to deliver full still camera and separate video camera functionality rather than the hybrid functionality of a single lens camcorder.

Most owners I’ve spoken to will tell you they love the video output of their camcorder, but are less than satisfied with the still camera output, even when it comes to photos from two and three megapixel camcorders. The problem always comes back to using a video lens to try and capture still pictures; this type of lens will never produce the same quality as a photo shot with a dedicated still camera lens.

Of course, as the technology improves and lens technology develops, this will change. But for now the DuoCam has a distinct advantage and Samsung is pressing this point of difference.

Interestingly, the digital still camera lens is branded ‘Samsung’ on the D6050i, when the previous model used lenses from ‘Schneider Optics’. Despite no longer using the famous German optical company’s branded lens elements, results from the test bench and from the printed test pictures proved to be much the same.

As well as setting variable resolution, the D6050i offers three quality settings in JPEG mode – Super Fine, Fine and Normal, plus an additional TIFF mode. For those new to digital photography, when the camera is set to record still images as TIFF files, the pictures captured are uncompressed. All JPEG images are compressed to some degree, depending on the quality setting selected.

In DSC mode the D6050i records to Memory Stick, Memory Stick Pro, SD and MMC media. There is a multi-card slot on the side of the camcorder where the different flash memory cards can be inserted. This is the only camcorder on the market that offers multi-media card input.

The DSC lens has a built-in leaf closure that covers the lens when the camcorder is in video mode. When the DSC mode is activated the protective leaves automatically slide away and the lens barrel engages and moves out from the camcorder’s body. The whole process is impressive and the camcorder takes about three seconds to move from camcorder to DSC mode.

As a digital camcorder, the DuoCam records to a mini-DV tape and offers MPEG-4 recording to whichever flash memory media you decide to use.

The DuoCam’s new dark-grey shell with silver flashes makes it an imposing-looking camcorder from any angle. It sits a little taller than most camcorders but this is necessary to accommodate the dual lens paths built into the camcorder and a small concession to make for that extra functionality. This third generation DuoCam represents a 40 percent reduction in size from its predecessor.

Moving away from the lenses down the left side of the camcorder, the first set of buttons you strike are for manual focus. A simple button and dial arrangement allows you to move out of the camcorder’s excellent auto focus mode and, by rolling the small barrel dial, easily adjust the focus.

This button and dial arrangement is also multifunctional in that it is used to adjust many of the manual settings when the DuoCam is in DSC mode. The barrel dial is used to navigate through aperture, shutter speed, white balance and the various Scene modes.

The DuoCam’s clear and bright Transrefective LCD screen pops out in the conventional way and does the usually front rotation thing – horizontally through 90 degrees and vertically through 270 degrees. Larger than the previous model, at 6.35 cm (2.5 inches), it has an impressive 200,000 pixel screen. The LCD is complemented by a 0.61 cm 113,000 colour viewfinder. With the battery on the back it is a wise design move to have the eyepiece viewfinder slide out so you don’t put a kink in your nose when trying to record using it in this way. Thankfully the engineers were smart enough to make this design concession.

With the screen opened out, a number of buttons and the DuoCam’s speaker are exposed. The U-shaped arrangement of buttons is interesting. In DSC playback mode they are used to navigate through pictures, providing the ability to go into thumbnails as well as delete unwanted pictures. In camcorder mode these dual function buttons are used to access Fade and BLC, (backlight control), while in camcorder playback they are the tape transport buttons.

Above the screen there are three buttons: EasyQ (essentially a full auto mode for both camcorder and camera where most manual overrides are locked); Display (allows you to toggle the on-screen information), and Menu (easy access to the camcorder’s settings). The DuoCam also has an extensive menu, which is made easy to navigate by a four-way dial right next to the row of three buttons. The four-way selector is also multifunctional. Generally it is used as a navigation tool (for example, to move around and select menu settings), however, in DSC mode it is used to adjust the type of flash, move into Macro mode and lock the current exposure settings with AE Lock.

Above the eyepiece viewfinder is the camera mode dial, similar to what you would find on a digital still camera. Used in DSC mode this allows you to select Manual, Aperture or Shutter Speed modes and toggle between record and playback.

Below the LCD screen are the connection terminals for the camcorder. The four sockets provide access for USB-2.0, DV (i.LINK), a proprietary AV/S-Video output and input, plus DC-in. The external mic is located on the right hand side at the front of the DuoCam. Unfortunately, despite the DuoCam having an external mic socket there is no headphones socket or an accessory shoe on this model – a serious oversight in our books.

Samsung’s proprietary Power Night Capture function significantly improves picture quality in unfavourable light conditions and this can be further boosted with the Slow Shutter mode. When Power Night Capture is engaged the image is illuminated via an infrared light. This presents the picture in ‘night vision green’. Pressing the Slow Shutter button then allows you to increase the sensitivity in a number of steps. The D6050i offers slow shutter speeds of 1/25, 1/13 and 1/6sec, with each step down increasing the camcorder’s sensitivity.

Also included is a built-in flash that activates automatically when light levels are low, and an average electronic image stabilisation system that only removes moderate camera shake. This is certainly an area that the Samsung engineers need to address in future versions of the DuoCam.

It’s worth noting that the DuoCam comes standard with two Li-ion batteries, both 1100mAh. This is a boon for camcorder users, especially as most other camcorders come with the lowest-power battery possible.

There are actually only a few other buttons on the DuoCam. Like most digital cameras and digital camcorders, an LCD screen offers the ability to consign many functions to a menu system. The DuoCam works on the same principle, with most functions accessible via the menu.

The camcorder delivered excellent video. It was clean, the colours rendered naturally in the field, and issues such as chroma crawl, colour bleed and jitter were virtually non-existent. The manual overrides on the camcorder provide you good control options in difficult situations, and to its credit the auto mode on the DuoCam is quite forgiving.

The story is similar as you move from being a videomaker to photographer. The 5.25 megapixel CCD delivers superb still images, and the manual control of the photography side of the DuoCam is equivalent to a basic digital still camera. The camera takes great photos with excellent definition and the ability to blow-up the 2592 x 1944 pixels images to at least an A4 size without any pixelation.

Overall, the DuoCam performed without a hitch in the field and on the test bench. As mentioned, the colour performance was very good and the camcorder section was capable of resolving just on 500 lines of horizontal resolution.

At a recommended retail price of $1,799 – some $800 cheaper than the previous model when it was released – the DuoCam still has some stiff competition on the both the camcorder side and particularly the digital still camera side.

In addition to producing top-notch video and stills, the DuoCam is packed with all the features consumers expect from a digital camera. The Instant ON feature means the camera is ready to go less than a second after the power button is pressed, while a new battery indicator displays the actual playing and recording time left.

Overall, Samsung has radically changed the DuoCam design for the better. The D6050i is a better execution in both design and performance over the previous twist model.Â  Importantly, there are loads more manual controls and much better functionality in both camcorder and DSC modes.

Best of all is the price difference. At $800 between this model and its predecessor, Samsung has managed to get both the design and the price point spot-on.