Samsung Flip is no flop in the collaboration world (review) 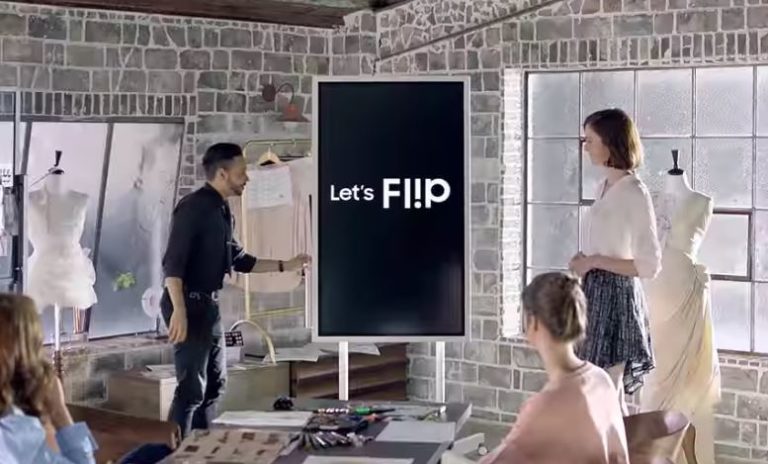 Humans like to collaborate. Work together, raise the bar and gain better outcomes. Samsung Flip facilitates collaboration in its unique way.

Before we get into the review, let’s analyse the overused and often abused term collaboration. It means involving compatriots (either in the same room or a wide area network) in a decision tree process to arrive at a better outcome. You can read more at Wikipedia.

There are some fabulous collaboration software and tools including Microsoft Teams, Slack, Asana, Jira and too many more to list. These capture ideas, allocate tasks, build timelines, nag with reminders and help get a better result. You can add pictures, documents, mock-ups, videos, sticky notes, allocate tasks, produce documents and action statements. The result is an action plan shared with all collaborators.

Samsung Flip does none of that

It is a digital whiteboard/blackboard with benefits. In other words, a real-time visualisation tool to assist with collaboration. Don’t get me wrong. It is far more than a digital whiteboard as it can access LDAP user directories, save and print to network devices, import content and much more.

My strongest advice to Samsung is to work with leading collaboration software companies to tightly integrate Flip into the collaboration process. In other words, make it a highly effective tool to help facilitate collaboration, even running their software.

To review the Samsung Flip (Model WM55H), we need to look at what it can do

Samsung Flip is essentially a 55”, 4K, portrait or landscape, touch screen ‘whiteboard/blackboard’. It has an optional wheeled solid stand (as tested) or can be wall mounted.

It runs a Tizen operating system and has 8GB (about 5GB free) of storage. All this is wrapped up in a Samsung Flip UI (user interface). Firmware updates (now over-the-air) continually add new features, e.g. open Microsoft Office files, LDAP enterprise directory of company users, and so much more (see post review note).

The screen acts as a traditional whiteboard or a blackboard with six pen colours and various highlighter combinations. Think of the screen as a 55” sheet of ‘butcher paper’, and you have 20 sheets per roll. Only this butcher paper can import images and Microsoft files.

The wheeled stand is an engineering masterpiece and allows the 55” screen to flip (portrait or landscape) effortlessly. It fits through standard doorways.

This costs $3,519 for the screen and $879 for the stand. You don’t buy this at a major retailer rather a specialist in signage or at Samsung online. Although we have seen some moderate discounts from specialist companies.

In simple terms, you can draw/annotate on whatever you can display and save/distribute it.

Two wooden pens are supplied (nice ecological touch) with a thick (4mm for highlighting) and thin (2mm for writing) end. They are best for drawing on the screen, but you can use many other things, e.g. pens (well the plastic pen top), stylus etc. Up to four people can draw at once. Maximum line thickness is 50mm.

Fingers don’t work except as an eraser. Or they will work if you use a glove!

Samsung uses an innovative; some call it disruptive technology called FlatFrog In-Glass optomechanical technology. It is neither capacitive touch nor infrared. Most electronic whiteboards infrared sensors around the edge to facilitate touch. Not very accurate or responsive.

One of the key advantages is ‘perfect clarity’. Although the glass does reduce nits brightness.

It can export finished content to email, printer, USB or the NAS.

The success of Samsung Flip depends on use cases

So, second, my second piece of advice to Samsung is to pitch the flip by ‘use cases’.

For example, GadgetGuy’s parent company GadgetGroup is a significant Australian content creation and marketing agency. We brainstormed its use and came up with

Some tests that may add more to your use cases

Make it a Windows 10 computer

We had an Intel Compute Stick. This is a full Windows PC replete with Wi-Fi, Bluetooth, USB, HDMI and more. We plugged a Logitech K830 Bluetooth keyboard/trackpad in and the Compute stick into the HDMI port.

Viola. A full Windows 10 PC. When connecting via HDMI, you don’t have touch until you snapshot any web page or content and ‘play’ with it. But you do have full touch if you connect the USB touch cable provided.

Cast from a PC

A Windows 10 PC/laptop has a connect feature (Wi-Fi Display) to cast (or it can connect via an HDMI output). When you cast, there is the full touch that allows the Flip to control the PC’s cursor and vice versa!

But in both cases, I strongly suggest that Logitech Bluetooth/Unifying USB dongle/ keyboard/trackpad as it makes life so much easier.

Cast from a smartphone

We tested with a Samsung Note 8 and its SmartView cast (Mira Cast). It offered full touch facilities both ways (as per PC cast). Similarly, an LG V30+ could cast with Wi-Fi Direct. Casting phones need Android 8 or later.

You can connect a smartphone via NFC if it is on the same Wi-Fi network.

We even cast from an Apple iPhone via Apple TV.

Make it an Apple TV

Along the same lines, you can plug in Apple TV (even the new 4K one) and have Apple TV functionality. The Apple TV remote works fine for moving around the screen.

You should be able to cast from an HDMI equipped device like Amazon Fire TV or Google Chromecast (not tested).

Make it a TV

We had a Teac Freeview box with TV tuner (RF antenna connection needed) and Freeview Plus. Simple – plug it into the HDMI port. This would also work with Foxtel.

Or an Android TV

We tested with Laser’s 4K Ultra HD media player It turned into a large Android TV. Touch does not work so you need to use the remote or the Logitech Keyboard.

Bluetooth – it does not have this

The stereo (2 x 10W) speakers are fine for average boardroom use reaching 80dB volume. They are not ‘hi-fi’ so if you want to connect external speakers you can’t. There is no 3.5mm jack or Bluetooth.

However, Bluetooth speakers can be connected to many of the HDMI/cast devices and add that extra bass thumping volume when you need it. You may also be able to use an HDMI connected soundbar with 4K pass-through.

How does the Samsung Flip look?

As such it is not a bright as a typical 4K TV that starts around 400 nits and can go up to 1000 for HDR. Still, for the boardroom and occasional TV use, it is fine.

It will accept any supported HDMI resolution from VGA to 4K but does not upscale.

Compared to other electronic whiteboards I have used lag times (pen to image) are very low. They are in the order of 40ms although this slows marginally when four people are drawing. The drawing/writing experience is one of the best with a pen on paper feel.

It has a four-core 1.7GHz processor and has 3GB of RAM and 8GB of storage (5GB free). Tizen 3.0 is teh operating system. It will decode common audio and video codecs.

Flip securely stores all content within a central 8GB database in rolls. This eliminates the need for transcripts or recaps. A password system can protect meeting details. Similarly approved users can access the data stored on Flip.

The Manual is here

The 55-inch Google Jamboard is very cloud dependent (like a Chromebook) but has the advantage of remote collaboration via its cloud. Flip is for in-house use.

When it comes down to it – a choice of Microsoft, Google or agnostic environments. Given you can cast from Microsoft or Android, then Flip may be the most economical way.

GadgetGuy’s take. Samsung Flip could be an integral part of your boardroom

This was not an easy review although it was very easy to use. There are so many features and things it can do. But in the end, it comes down to importing an image, annotating, drawing and exporting the finished product.

If Samsung’s goal was a lower cost, straightforward, don’t even have to read the manual device than it succeeded. Therefore, it can ignore my strong advice to run collaboration software.

If you have a lazy $4,400, it is a valuable addition to the corporate boardroom. It fulfils a specific need as is but with a variety of add-ons could do so much more.

The key here is fit for purpose. Make sure you have the right use case.

After we had finished the review, a new firmware update gave additional functionality (most not fully tested).