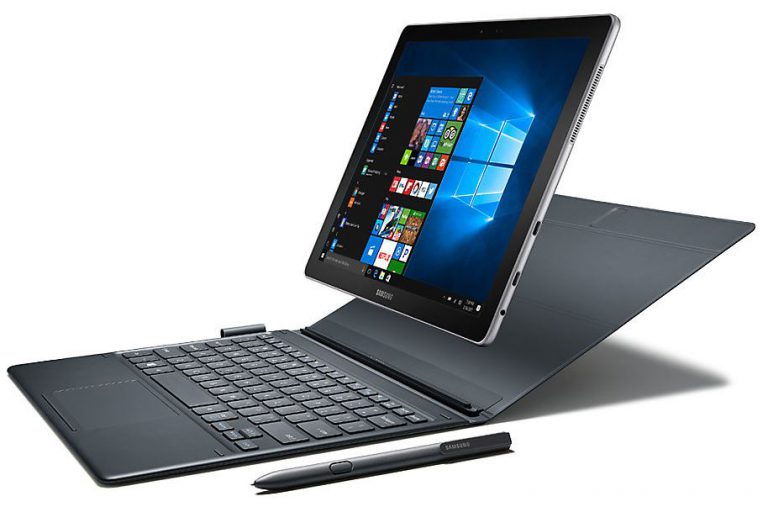 It has Windows 10 Home running on an Intel Core i5 but it does not claim to be a lap/desktop replacement. It is a lightweight tablet with a detachable cover/keyboard and S Pen – both supplied as part of the same package – and uses USB-C.

There is also a 10.6”, Intel Core m3 version weighing 648g that could be an ideal Android tablet replacement with access to the full Windows ecosystem.

The tablet is solid, very well made and weighs 745g or add the keyboard for a total of 1.16kg. And best of all it comes standard with everything you need except a USB-C dongle!

Then WOW – the 2160 x 1440, HDR capable, Super AMOLED screen comes to life and you can be forgiven for thinking that just about every other screen you have seen is inferior.

A good AMOLED screen beats all

AMOLED has real blacks, perfect whites, increased colour gamut, infinite contrast, and each of the 3.11 million pixels can be individually controlled allowing High Dynamic Range (HRD) content (when you can get it) to show lost details in shadows and bright areas. Best of all the text is razor sharp.

It has numerous settings – Adaptive, Cinema, photo, and basic. Cinema really punches the colour up to more than 200% sRGB while Photo is more realistic colour at 98% AdobeRGB – way up on Surface Pro and x2 Spectre at 73% each.

Like the Surface and other hybrids, it has adopted the 3:2 screen ratio which offers more workspace for productivity apps.

S Pen – The writing experience is fabulous and it is included!

A stylus will play an increasing role in the interaction with Windows and Samsung is offering one of the best – a 4096-pressure level S Pen that does not need batteries.

Its collaboration with Wacom it draws power from the screen (Wireless Charging) and supports gesture (Air View/Command or hover) and drawing. It has a 2B tip size (.7mm) and it is a nice, responsive tool to use.

The optional STAEDTLER Noris digital “pencil” stylus in its familiar yellow and black, red tipped pencil shape is something a little different and sentimental.

Palm rejection is perfect, pen comfort is good, and the “pencil on paper” feel is more like a fountain pen – silky smooth with just the right resistance.

Hovering the S-Pen stylus triggers Air Command: a menu of apps that allows you to ink on the screen and save the result, create a Samsung Note, project an area of the screen to another display, or simply “smart select” a region of the screen.

Smart Select allows you to do three things – select a region of the screen reproduces the Windows 10 Snipping Tool, which you can share or save to your hard drive. But you can also take that area you’ve highlighted and extract the text, handy when used with a photo of a document. Finally, there’s the GIF creator.

It also fully supports Windows Ink and every app using that – Adobe suite and AutoCAD for instance.

A well-spaced, Chiclet island keys, a 1.3mm throw and 80g actuation, good tactile feedback, and no annoying neighbouring key bounce. The Windows Precision track-pad is large enough to cross the screen in one swipe, there is an NFC “pad” on the right palm rest, and it is back-lit.

The standard typing test was about 75% of what can be achieved on a Logitech Orion G610 mechanical keyboard. Accuracy, however, was just as good.

The keyboard acts as the stand and cover. It has four angles – most used are 135° (typing) and 165° (almost flat) but it is a little finicky and relies on origami-like folds and good luck until you get used to it. It is not the best on your lap as the magnetic bonds can easily part. It also allows the keyboard to be folded back behind the tablet (clipboard style) and it disables the keys.

If you are buying it as a travel companion then the keyboard is fit for purpose. If you are looking for a lap/desktop replacement or absolutely need a kickstand look at the Surface Pro 2017 (with the third-party Brydge keyboard) or HP x2 Spectre 2017.

Battery life – good for an i5

Samsung claims the 5070mAh battery gives 11 hours on a standard video loop test but I could not replicate that.

My video loop tests were 8-9 hours and in general office use (Office 365, Web browsing, email, notifications) around six hours. You can play with power plans from performance to battery miser.

It has two USB-C ports on the right “short” side that can be used for data and upstream/downstream charging.

If the tablet was switched off fast charge was excellent giving 50% in about 45 minutes and zero to 100% in just under two hours.

When on it gives a full charge in about four hours. You can also use a standard 5V/2A USB-C charger but recharge time is several hours.

If I were to use it as a desktop replacement then Kensington’s SDC4600P USB-C dock https://www.kensington.com/au/au/4491/38231/sd4600p-universal-usbc-docking-station-with-power-delivery at $349.95 with power would be my choice. It has a 60W power supply, supports dual 4K video (own video card – 1 x HDMI and 1 x DP), Gigabit Ethernet and various USB connectors. There is a later version supporting Thunderbolt connections https://www.kensington.com/au/au/4491/38232/sd5000t-thunderbolttm-3-docking-station as well.

How does it perform?

The Intel Core i5-7200U is used by many Windows laptops including Acer Aspire Spin, ASUS ZenBook 3, Dell XPS 13, HP Envy 13, Lenovo Yoga, Toshiba X30 and many more. It has a PassMark of 4693 which is adequate for general office use, movies, web browsing etc., but it is not a gaming CPU/GPU.

This is a basic Realtek sound setup with no customisation. It produces lower than average volume levels at 64dB music and averaging 41dB in speech – OK for personal listening but is a long way off room filling levels.

Bass kicks in at 100Hz and is solid to the mids, and then treble falls off from 10Khz. The sound signature is warm and sweet (bass/mids boosted, treble recessed) and a lack of presets to boost treble means it is not the best for listening to podcasts and vocals.

It is not bad sound but it is not what other tablets can achieve.

It is a wide-angle lens that is good for Skype and small huddle groups. Fine in daylight and office lighting (500 lumens) but adds too much noise in low light and if using digital zoom.

It is the same sensor as used in Sony Xperia XA, Samsung Galaxy J7, LG G6, and OPPO A57 and is a competent daylight to lower light camera. It has very good colours, good blacks, works well down to 200 lumens. It creates 4MB image size in 4:3 and a 3MB in 16:9.

Video stabilisation is available in 3840 x 2160 @30fps (or less). Watch that you don’t cover the microphones when recording video in portrait mode – they are both on the right long side.

It is still early days for this app and it will have expanded functionality over time. You download it from Windows Store on the tablet and Google Play on the Galaxy smartphone. Pairing is via Bluetooth. It uses the TPM feature for security.

Once paired you can

Comparisons with the Microsoft Surface Pro 2017 or HP x2 Spectre/Envy 2017 are inevitable and if you want a Surface-like device with an integrated kickstand then these are your best choices.

Samsung is chasing a different market where the amazing AMOLED screen and HDR 10 in a tablet format are important. I can see it as a traveller’s companion on long flights for movies but equally a good work companion with Microsoft Office 365 and more. If an integrated kickstand is not a deal breaker then this is the best choice.

Don’t measure this by the Surface Pro 2017 or HP x2 Spectre 2017 – measure it by what the Samsung package is, and what its ecosystem can, and will offer.

It is not a lap/desktop replacement – a primary PC – but a premium complement to anyone that owns a Galaxy Smartphone and wants to use it as an extension of same.

Once you hook up the genuine Samsung USB-C Multiport adapter it really starts to shine as a good all-around computing device.

The Super AMOLED screen is breathtaking, performance is quite good and the battery life is acceptable for most use cases. The keyboard is one of the better wraparounds and the S Pen has a lot of potential.

I am going to rate it for what it is – a travel companion with Windows 10 thrown in for productivity.

Overall: 4.2 out of 5
Features: 4.5 out of 5 – especially as it includes the S Pen and Keyboard cover
Value for money: 4 out of 5 – expensive but with the right dock and accessories is a desktop replacement
Performance: 4 out of 5 – fine for office use and the 10.6″ would make an ideal “handbag” sized tablet
Ease of Use: 5 out of 5 – Windows 10
Design: 4 out of 5 – The keyboard cover is a little complex and can come off easily.

See table above but don’t over look the 10.6″ if you need real portability.