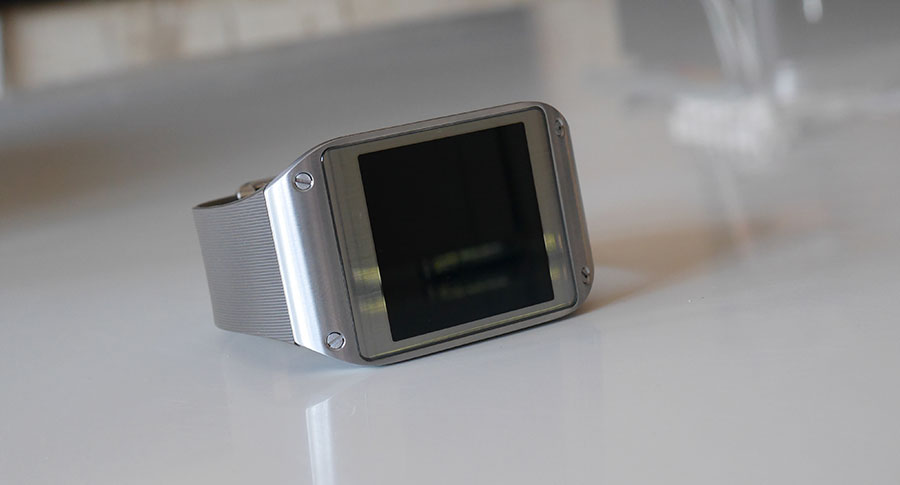 The next big area for must have devices is being talked up as companion devices, because while we all have mobile devices, we don’t always want to get them out and look at them, and that’s where the smartwatch comes into play, offering calls, notifications, and more on your wrist.

The first of what will no doubt be a long line of smartwatches, the Gear is a new product in Samung’s Galaxy line-up of products, designed to bring mobile access to another part of your body, so you don’t have to take the phone out.

This part of your body is your wrist, and in the Galaxy Gear, Samsung is basically throwing a small computer on that limb to work in tandem with that other computer that you leave in your pants or in a bag.

The top of the Galaxy Gear has a 1.63 inch 320×320 Super AMOLED display to help you see what’s happening, with similar technology to a smartphone under the hood.

With that in mind, there’s a single-core Samsung-made Exynos processor inside clocked at 800MHz working alongside a dedicated graphics processor, 512MB RAM, and 4GB storage, which might not sound like enough, but because of this being a companion device to a smartphone, sends much of the baggage — images and videos — back to the phone, so as not to weight the watch down.

There is no 3G or 4G here, relying on the smartphone for that through the use of Bluetooth 4.0.

A camera is also present, available on the wrist band and capable of shooting images just under two megapixels (1.9, to be exact), as well as short 720p HD videos.

An accelerometer is also present, capable of tracking movement for the pedometer, and switching itself on from standby when you bring the watch close to you when it’s off.

There is some degree of ruggedisation of the device, rated for IP-55, which means a bit of water can enter, as well as some dust, just don’t go swimming with it.

Only one button can be found of the Galaxy Gear, a power button on the right side, and it comes with a proprietary charge cradle which requires you to take the watch off, rest it against magnetic connectors inside its case, and plug that into a microUSB connector.

The battery is rated for 315mAh.

As our smartphones get bigger, our desire to pull them out and use them on the go seems to lessen, even just a little. That seems to be the philosophy behind a new drive for companion devices, accessories which communicate with smartphones and tablets, displaying your mobile life on a smaller screen that is more easily accessible.

Samsung isn’t the first to enter this space, and there is a lot of activity in the accessory market, with companies like Google and Sony all joining with devices in the past year.

That said, Samsung is one of the first with a ready and available product, and has developed its Galaxy Gear to provide a smaller device with which to make it possible to leave that bigger smartphone in your pocket, pants, or bag.

Looking at the watch, it’s not quite the design you expect after seeing Samsung work with it’s plastic devices for so long.

Sure, there’s a plastic band here, but the device shines in the sunlight, offering metal and glass for anyone that looks upon it.

Smartphones are mostly button-free affairs, and the Galaxy Gear continues in that tradition, offering merely one button on the right side, a power button for when you desperately need to turn the device on and off, and when the accelerometer hasn’t done a good job interpreting your wrist movements to do just that.

Inside the watch, there are movement controllers, and these bring the watch back from standby most of the time, so your need to press the side button is less important, and you can focus on the required gestures.

Let’s talk the camera first, because it’s a neat function that no other smartwatch has at this point.

When you go into this mode, you’ll find the roughly two megapixel shooter on the wristband kicks into action, allowing you to fire off shots from the wristband, which is especially useful if you’re trying to take a shot without people noticing, such as in a store for a product you’d like to remember later.

Some apps make use of this technology, and there’s even a wine app that will scan wine labels and not just let you rate the drop you’ve tasted, but also tell you what it pairs well with, which is a type of technology that has existed on smartphones for years, but makes it even more convenient when it’s hanging off the side of your wrist.

One thing worth noting with this technology is that Samsung has made sure you’re telling the world that you’re firing off a photo, making sure that the camera autofocus beep and shutter noise are both heard, regardless of your settings.

There’ll be no silent shots, it appears, and even though it seems that the images from this tiny camera should be more convenient, they’re still just as loud.

Image quality here isn’t fantastic — hey, it’s a two megapixel shooter, what do you expect?! — but they’re also not bad, and low light, while not detailed, has less noise in it than a lot of smartphones grab on their higher megapixel cameras.