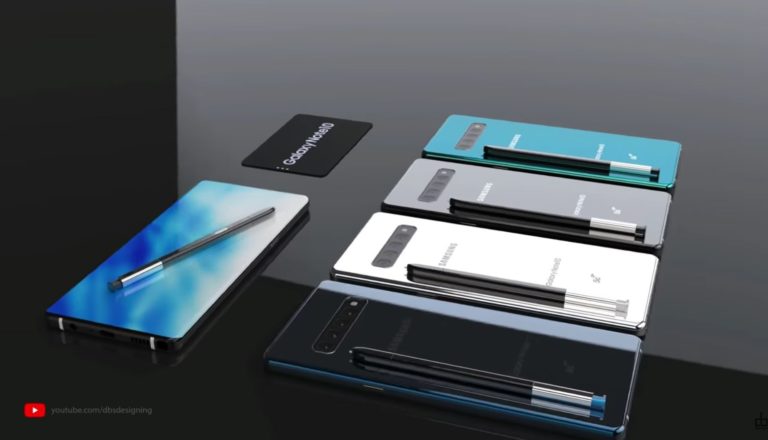 Samsung’s real flagship – the one that sets the standards for next year’s Galaxy S model – is its Note series. The Galaxy Note10 has two new sizes and features – if you believe the rumours.

The Samsung Galaxy Note10 model numbers for the 4G family are SM-N970 and SM-N975, and 5G are SM-971 and SM-976. It is expected to launch, as usual, in August this year. Its internal codename is Da Vinci and features focus on creatives that want true colours and enhanced image tools.

Using the Galaxy S10 series as a guide the strongest rumour is that there will be two Galaxy Note10 variants (4G and 5G) and two sizes – 6.4 and 6.75-inch displays. The 6.4-inch screen is a no-brainer and would use the S10+ screen. There is also a strong rumour of a smaller 6.28” flat screen model. Given that 5G needs more antennas and more battery power the bigger size is likely, but I doubt we will see a flat screen version.

4K, HDR10+. Dynamic AMOLED (as per the S10+) but with a couple of new Gamut settings for professional photographers (likely 100% Adobe RGB) and of course a 10-bit colour screen. The S10+ screens are impressive – the Note10 should absolutely pop.

We may see Samsung’s patented self-healing screen which has a top layer of an anti-fingerprinting composition having a self-healing property includes a polyrotaxane, a polyhedral silsesquioxane, and a fluorinated (meth)acryl compound.

Touch and voice for everything

It may do away with external buttons. If so the power key volume, voice assistant and fingerprint could just be capacitive and/or by gesture swipe or voice. Both would allow for a different internal design giving more room for battery and S-Pen.

It will have the Qualcomm SD855 (for some markets) and the Samsung Exynos 9820.

August is way too early to use the Qualcomm 865 chip due for release in October/November. At that time Huawei will have finished its Kirin 980 for the Mate 30 series and Samsung it’s Exynos 9830 for the S11 series. Early rumours suggested Samsung may use the yet-to-be-released Exynos 9825 – an incremental upgrade focusing on dual NPU cores.

Regardless of the chip, it will have loads of power and memory to do the job. There is still a lot of life and development work on AI etc., that the SD855 and Exynos 9820 can support.

A new high-capacity battery supporting Qualcomm Quick Charge 4+ and Wireless Qi 4.0 charging. Recharge speed depends on the final mAh battery capacity (over 4,000mAh) but a 70% charge in 30 minutes and 100% in 60 minutes. More exciting is the reverse charging feature (in S10/+) and that any USB-C charger supporting PD 3.0 will charge it even faster at up to 27W.

The SD855 will have the new X55 5G modem and the Exynos 9820 the Exynos 5100 5G modem. These are separate from the SoC which already has gigabit LTE, Wi-Fi AX and BT 5.0 and accounts for part of the need for a physically larger device.

Both will have three cameras capable of 4K@60fps, HDR recording.

The TOF 3D scanner camera (that means Time of Flight for 3D and distance) on the 6.75-inch is becoming more important for 3D scanning and augmented reality. There is an argument that it should be on the front, but two O-holes will suffice for now.

Rumours are that the Huawei P30 Pro surprised the world with its 5X periscope camera and it is too late for the Note10 to incorporate that. But last year Samsung invested in Israeli company Corephotonics (that helped develop OPPO’s 10X lossless periscope camera which uses a Samsung ISOCELL sensor), and we may see an even better periscope camera in the Note10.

Another rumour is that the device can shoot a software combined 100MP RAW image. Whatever the case, Samsung will be looking to better both the P30 Pro and Mate 30 Pro in the camera department.

As per the Note9 features, it can act as a remote mouse/cursor click. There was a rumour that it might have a camera as well, but that is highly unlikely.

It is standard now that flagships can use USB-C to HDMI for an Android Desktop Experience (DeX). Samsung expects to be able to cast DeX wirelessly. It includes Microsoft Remote Desktop that can access a Windows-like desktop replete with Office 365 and all its components  – dependent on having an Office 365 subscription. Of course, you can run Samsung’s Citrix Receiver client and have a real Windows desktop.

With Huawei declaring it will knock Samsung off its #1 perch by the end of 2019 it will do that with its massive Chinese market (Samsung has 1% of the Chinese market) and its lower cost Nova models (which are very good value).

Samsung has a longer pedigree and is a more global brand with strong US and western nation support so it will focus on those markets.

And let’s not forget that the prime reason to buy a Note is the stylus. Otherwise, S10+ is a better fit.

What about the Galaxy Note11?

The real action will heat up in the foldable and 5G space where given another year’s development and the reality of faster more integrated processors, memory, battery and camera we may see the Note11 morph into the foldable space.