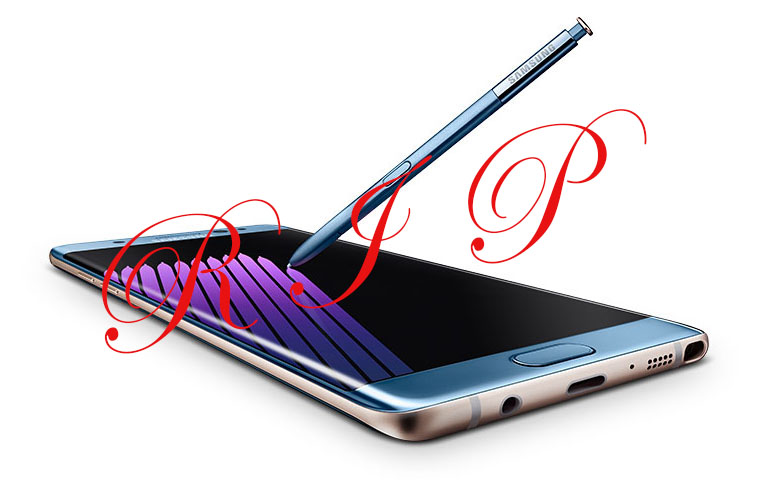 First the Samsung Galaxy Note7 was well reviewed and well received … until units starting catching fire here and there. After a short while it was taken from the shelves, then it was officially recalled. And then replacements were issued.

Samsung pushed customers hard to bring in their old Note7 phones once it had new ones in stock but sadly they started catching fire as well. And, so, Samsung killed the Samsung Galaxy Note7, offering refunds.

But there were still phones out there, so a few weeks ago Samsung started crippling them by limiting their charging capacity to 60% via a forced firmware update.

And today Samsung is making sure the remaining few out there will be returned:

Samsung Electronics Australia is working with local telecommunications operators to discontinue Australian network services for Galaxy Note7 devices that are still being used in Australia.

The network discontinuation will commence from December 15 and is part of Samsung’s ongoing safety measures to recover all affected Galaxy Note7 devices.

That doesn’t mean that the Galaxy Note7 won’t work, but it does mean that from 15 December 2016 (two weeks from now) you won’t be able to make calls with one, nor link to the Internet via 4G (or lesser) networks. I expect you’ll still be able to use WiFi (unless a further forced firmware update cripples that). But why would you want it?

The only good reason for keeping a Samsung Galaxy Note7 is as a collector’s piece. In that case, it should be factory reset, switched off, returned to the original packaging and put safely away.

For anyone who still has a Note7, Samsung reiterates its request:

Samsung Australia urges any customer still using their Galaxy Note7 to power down and return their device to the place of purchase for a refund or replacement immediately.

Samsung’s probably safe, but we’d suggest doing a factory reset first to make sure all of your personal information has been purged.

As an apology and to thank you for being a loyal Samsung customer, if you exchange your Note7 with either the Samsung Galaxy S7 or Galaxy S7 edge, you’ll receive a refund for the difference in price as well as a partner specific offer.

Telstra, Virgin Mobile, Optus and Vodafone will give you a $250 credit on your account, while the big brown goods retailers – Good Guys, Bing Lee, Harvey Norman, JB Hi-Fi and Samsung retail stores (which, I confess, I didn’t know existed until five minutes ago) will “Credit you with $250 towards your new device”. Online retailers, Samsung itself for purchases made via its website, will pay the refund plus the $250 bonus in the form of a Visa gift card.

So, collectors aside, if you still have a Samsung Galaxy Note7, do go and cash it in.