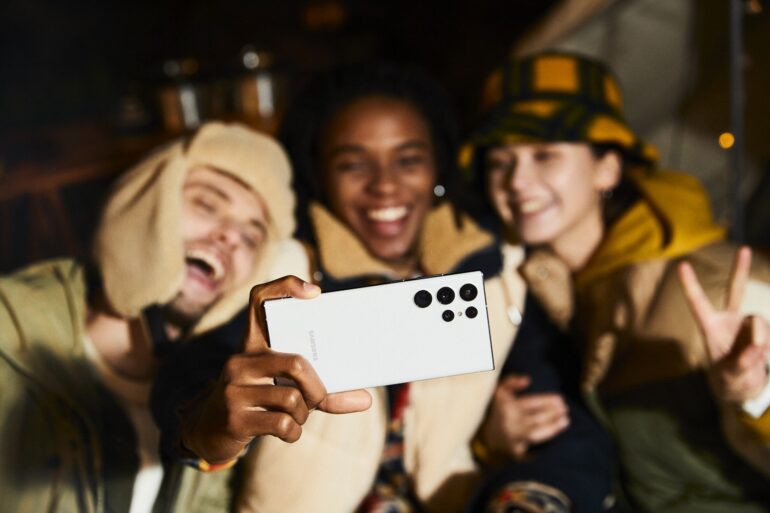 The new Samsung Galaxy S22 range of handsets don’t deviate too far from last year’s design, with the biggest overhaul reserved for the camera.

Both the Galaxy S22 and S22+ are equipped with a 50MP main camera, 10MP tele-lens and 12MP ultra-wide lens. With a larger image sensor than the S21 and S21+, the handsets offer new Nightography features – designed to improve low-light performance by letting in more light, drawing out details and better capturing colours.

Meanwhile, the Samsung Galaxy S22 Ultra features Samsung’s largest pixel sensor ever. The 2.4um pixel sensor is combined with 100x zoom. Like the S22 and S22+, the Ultra features the Expert RAW app, with a comprehensive suite of in-camera editing tools that deliver a DSLR-like experience.

This includes the ability to save photos in RAW format up to 16-bit, as well as brighten or darken photos with ISO settings, shutter speed, white balance and manually focus.

When capturing video, the new Auto Framing feature is designed to detect and track up to 10 people and can automatically adjust the camera’s focus. The handsets also take advantage of advanced VDIS technology which helps minimise vibrations to ensure smooth, sharp footage.

The Samsung Galaxy S22, 22+ and Ultra all feature a Dynamic AMOLED6 2x adaptive 120Hz display. It utilises intelligent Vision Booster technology to automatically adjust the display according to the ambient lighting.

The S22 offers a peak brightness of 1,300 nits, while the S22+ and Ultra bump this up to 1,750 nits. Backing the bright screen, all of the handsets support fast charging and an all-day battery life.

Under the bonnet, the new Samsung Galaxy S22 handsets are the first Galaxy smartphones to rely on a 4 nm processor. The S22 and 22+ pack 8 GB of RAM, accompanied by 128 or 256 GB of onboard storage. Meanwhile, the Ultra goes as high as 12 GB or RAM, with up to 1 TB of storage.

All three handsets support 5G and Wi-Fi 6E. They run Android 12 and will be supported by up to four generations of Android OS upgrades.

The Galaxy Tab S8 series tablets feature Samsung’s new 4 nm processor, accompanied by up to 16 GB of RAM, 512 GB of onboard storage and a microSD card slot supporting up to 1 TB.

The tablets offer improved video conferencing thanks to ultra-wide front cameras, a three-microphone setup and intelligent auto-framing. Multitasking capabilities include Multi-active Windows and Samsung DeX, along with file sharing with password-protected Quick Share.

Samsung will also launch a range of limited-edition custom colours for the Galaxy S22 range, which will be available exclusively on its eStore. These devices are made-to-order with an approximate 3-4-week lead time for delivery.

More news about Samsung on GadgetGuy.