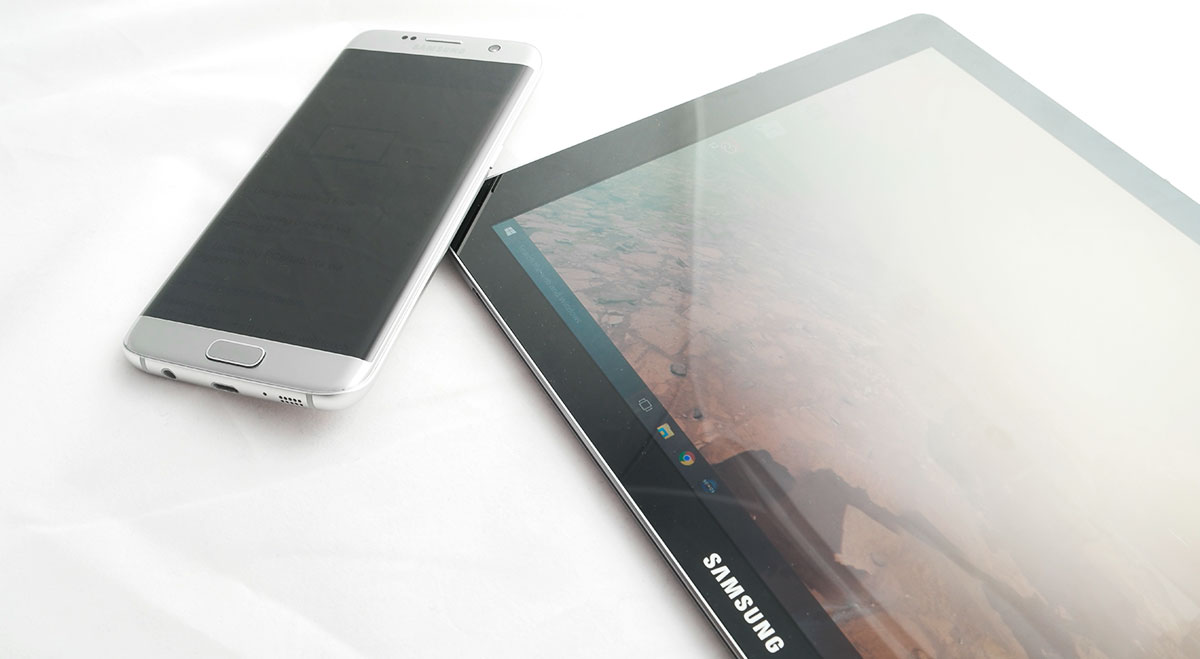 Samsung is returning to computers, well, sort of. Fresh off the back of new and successful smartphones in the S7 range, the company responsible for the “Galaxy” range of devices is returning to Windows for a notebook on a diet.

It’s been a while since we’ve seen a Samsung computer, but the company is on the return to the category, focusing and refocusing its efforts into something else, with a device that is both a tablet and a computer, yet has some of the design sense in common with a Samsung Galaxy S phone.

That design is something we’ll get into in just a moment, but the specifics include a 12 inch Super AMOLED display running the resolution of 2160×1440 and providing a screen clarity of 216 pixels per inch.

Inside the computer, you’ll find an Intel Core M processor from the sixth-generation of Core chips, also known as “Skylake”, with this one a dual-core m3-6Y30 clocked at roughly 1.5GHz (each core sits at around 0.9GHz), with 4GB RAM and 128GB storage.

Microsoft’s Windows 10 arrives on the Galaxy TabPro S out of the box, with either Windows 10 Home or Windows 10 Pro depending on the version you buy, and there are even a few Samsung bits of software sitting on top.

Connections for the computer are a little subdued in comparison to what a modern laptop or tablet might have, with wireless catered for via Bluetooth 4.1 and 802.11a/b/g/n/ac, as well as GPS and Near-Field Communication, though wired merely offers one USB Type C port and a 3.5mm headset jack.

Cameras can be found here, too — it is a tablet, after all — and you’ll find a 5 megapixel camera on each side with no flash for either and Full HD video capture on both.

Buttons are found here, too, with a power button up top next to a volume rocker, and then a Windows home button for the Start menu on the left side corner.

Charging the tablet happens through a USB Type C port, and that will charge a 5200mAh battery inside the tablet.

Samsung is doing some serious work in the phone and tablet space lately, and design is a big part of what the company is paying attention to.

Here in the TabPro S, you get the feeling that the simplicity from the standard Galaxy S6 and S7 is what is being channeled, because there are no steep curves and there are no defined edges.

Rather, this is a tablet with a soft metal frame holding everything together, with what feels like an only slightly textured back and of course a massive glass panel up front.

Or in other words, it’s a tablet, because tablets tend to be large screens with computers on the inside. and that’s precisely what this is.

We do like the edges, metal and premium, with magnesium employed here, and the whole device has a nice top-end experience to it, like you’re getting something that has been agonised over in the decision making process, one of which would easily be the fix-ins.

Easily one of the more complained about things from Microsoft’s Surface range is the lack of an included keyboard, and it’s not just reviewers criticising this, but customers, too. It’s hard not to get frustrated by the obvious point-out that when push comes to shove, after spending whatever it is you spend on the Surface machines, you still need to fork out between $140 and $200 on a fabric-backed Type Cover keyboard to make the Surface more of a computer.

With Samsung’s Galaxy TabPro S, however, a pleather backed keyboard comes in the box, and this is part of the design simply because it — like the Surface — relies on a magnetic dock connection, and it even keeps the size down when collapsed, offering a folio design that looks uber-professional, as if you’re carrying around something important.

Even if you don’t have professional projects to make yourself look super swish, you’ll still find a decent machine waiting for you underneath, with Intel’s sixth-generation Core M processor providing just enough speed to get you through the day, ideal for productivity, web surfing, email and the like, though you can do more if need be.

We found Photoshop could run perfectly well here, though the lack of RAM doesn’t help the images load quickly, so it would have been nice to see a boost.

Bugs were noticed, however, with shut down issues that occasionally popped up stopping the device from actually switching off, as well as some overheating issues while the tablet stays dormant in your bag. That’s similar to what we experienced with Microsoft’s Surface Book when it first appeared, so we suspect these are just teething issues, even if we feel obligated to note them.

Mostly though, it’s a decent performer, reminding us more of a lightweight business and productivity friendly notebook, even though it’s quite obviously a tablet connected to a keyboard.