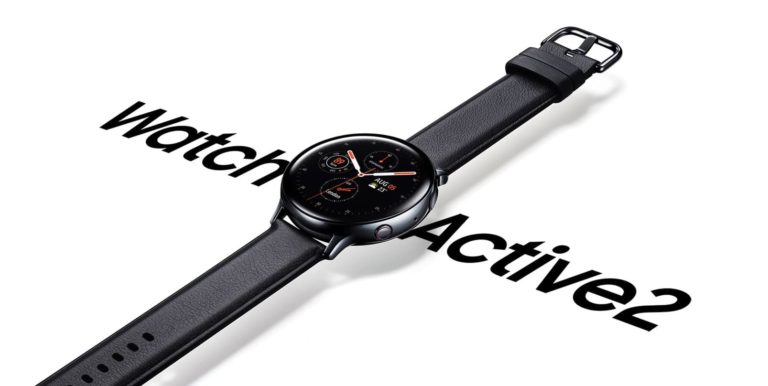 Now before we get into the review, let’s look at Samsung’s pedigree. It introduced the Gear range back in 2013. It was or is, based on Samsung’s Tizen operating system, and the back-end health app is Samsung Health. So, it has had ten iterations of Gear, including its Fit bands and it’s Samsung Health app is up to version 6.8.x. It is considered one of the best consumer health tracking apps outside dedicated pro circles.

Note these are RRP so shop around

I feel quite at home with the larger Galaxy Watch Active 2, 44mm version as I usually wear the hulking big 46mm Galaxy Watch. While I don’t want to compare the two, it’s a bit like chalk and cheese. Galaxy Watch looks like a diver’s watch and Watch Active 2 is more of a trendy fashion statement.

If you have a more slender wrist the 40mm version is the same – just a smaller battery life.

I am testing the SM-R825F, the 44mm version with LTE (eSIM) and it is in a blokey semi-matte black case and leather strap. The other choice is Rose Gold.

Summary: More elegant yet just as tough as the Galaxy Watch with 5ATM + IP68 /MIL-STD-810G

Easy as – download the Galaxy Wear and Samsung Health App.

As I already use a Galaxy Watch my Note10+, it found it immediately and voila. An on-screen tutorial made sure I was familiar with swiping and buttons.

At this point, you should explore the Wear app settings. For example, you can select the apps that can use notifications, reorder apps to suit your use, play with widgets, change vibration/volume, and so much more.

One thing you will want to do it search the hundreds of free and paid watch faces to get one that suits you. These are essentially classic, minimalist, trendy, informative, health, time focused and more. Try the free ones first – my favourite is MD111 (see image above) that has Step, Floors, Heart Rate, Calories, Moon phase, date and digital time.

I have used several watch operating systems – this is Tizen (and I am most familiar with that), Google Wear OS, Huawei OS 2 and a few other proprietary OS like Garmin and Fitbit.

While Google Wear OS has a larger app base, Samsung Tizen does not really lack as it has everything you need. In fact, Google Wear feels a little more dated and clunky – perhaps because it must run on so many brands and models of watches.

Now I love the Galaxy Watch Rotating bezel (part of Tizen). Fortunately, Watch Active 2 has this feature hidden in settings, and it is way more intuitive than swipe left/right/up/down.

There is an HR sensor on the back using eight photodiodes. It is a little more accurate than any other recent Samsung watch I have tried that have four sensors.

In some countries, there is also atrial fibrillation (Afib) and ECG app to capture their heart rhythm when they experience symptoms such as rapid or skipped, low or irregular heartbeat. Although in Australia it is not approved as a medical device, so we don’t get that app.

Battery – from PASSable to EXCEED

Most reviews complaint about battery life, which can be from as low as half-a-day to four days. In Samsung’s defence, its low usage claim of up to 131 hours and its typical usage of over 60-hours are based on some mythical lab tests. In the fine print, it states

Actual battery life varies by network environment, features and apps used, frequency of calls and messages, number of times charged, and many other factors.

It is best to leave the Galaxy Wear defaults for a week or so as it learns your usage patterns to extend battery life. The more you switch on, e.g. Wi-Fi, BT, GPS, LTE, continuous heart rate, screen brightness, Always on Display* etc. – the less battery life you will get. We believe at worst it will be a full day.

The 40mm version is functionally equivalent to the 44, so its smaller battery will not last as long. We estimate 30% less battery time.

Note Samsung recommend 5V/150mA charger, but we did not have something that ‘old.’

But there is one negative here. Wireless charging requires a WPC charger (not the more popular Qi), and there are very few third-party chargers.

Data: Telstra state 3G/4G has typical download speeds of between 1/2Mbps to 20/50Mbps in all capital cities but outside that its 550kbps-3Mbps.

Voice: While Active 2 has some 4G bands, it does not have Telstra Band 28 (700Mhz is so important for good indoor coverage). International roaming is not supported. It does support VoLTE (voice over LTE) and VoWi-Fi (Voice over Wi-Fi).

Once Telstra turns off 3G in 2024, these smartwatches (all Apple 3-5 series, Galaxy Watch and Galaxy Active 2) will only work on a limited set of 4G spectrum bands, and as a result, may experience a reduction in Telstra mobile network coverage.

You can’t get a separate phone number for both the watch and your smartphone. eSIM also does not work with iOS – Galaxy S6 or later only. Telstra offers One Number, Optus and Vodafone have post-paid wearable shared eSIM plans for around $5 extra per month.

The Watch Active 2 has all features of the smartphone it connects to via Bluetooth.

Please note that we were unable to test LTE functions as our test Note10+ already has One Number enabled for the Galaxy Watch.

Summary: LTE is a great idea, and the One Number monthly cost is reasonable. But you chew up a lot more battery. Its only advantage is being able to use the watch as a phone without the phone in your pocket.

You can pair to almost any BT enabled speaker, earphones, headphones or car audio. Note that if you select the BT headset option (using the speaker and mic for hands-free) music is further compressed to support the mic and speaker bandwidth.

There is 1.4GB of storage, or you can install Spotify Premium and download to the watch. The watch will decode MP3, M4A, 3GA, AAC, OGG, OGA, WAV, WMA, AMR and AWB but the BT Codec is still SBC.

This nearly 7th generation product is the main reason to buy a Samsung watch – because Gear, Fit, Active and Watch all link to it and share data.

Rather than go on, and on, here is the Samsung Health website. It has everything from steps, stairs, sleep, programmed exercises, groups challenges, motion alerts, track sets and reps, food tracking and much more. It rates 4.3/5 on Google Play.

It is as accurate as the Galaxy Watch and previous Gear as far as steps. Hint: You may need to calibrate it to your step length.

Our advice as for any fitness app – you really don’t know how good it is until you use it for more than steps and sleep.

Probably the best ‘Android ecosystem’ smartwatch and even better with a Galaxy phone. Premium hardware, great minimalist looks, and Samsung Health are ideal for most.

Don’t be surprised if Samsung Health is the main reason to buy. I say that after trying Huawei and other brands and their health apps simply don’t stack up.

But I don’t recommend you buy the $799 LTE version (unless you need LTE) for a few reasons. No band 28 support means it reverts to 3G most of the time; you can’t access the faster 4GX network, rural coverage is less, no small cell coverage and the in-building signal is low. But you can live without band 28 especially as can use either ‘One Number’ or it pair it to the phone.

I think the better proposition is the 44mm Aluminium Wi-Fi/BT model at $549 with a rubberized Fluoroelastomer sports band that is going to last a lot longer than leather for a 5ATM IP68 device.

Or the still current Galaxy Active (1) version at $349 is a bargain.

And what’s with Bixby – it is no longer a mainstream voice assistant although it has more device-specific commands than Google. OK, you can implement Google Assistant if you are a rocket scientist – Samsung should just do it.

Oh, and we got to the end without a single comparison to Apple Watch, which is best for iOS users and crap for Android!