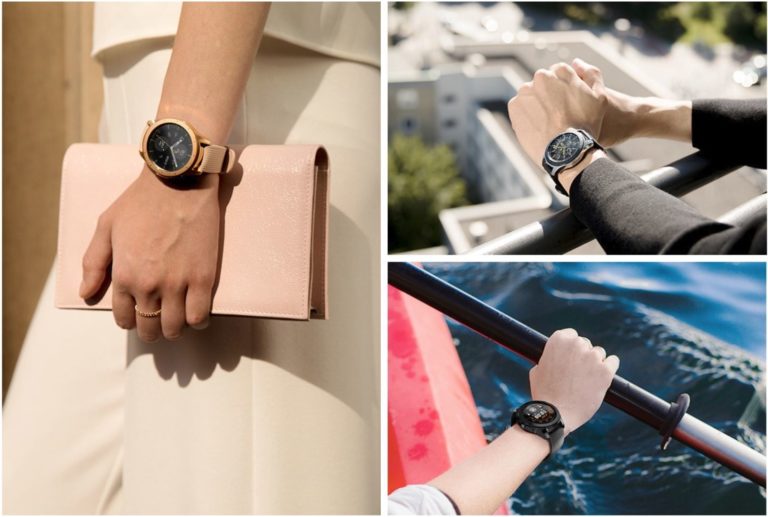 Galaxy Watch was launched in August last year. Because it’s far more of a smartwatch that most – more of an Apple Watch equivalent in an Android world – it warrants a full review.

We have no excuse for a late review. In part that is because we were all happy with its predecessor, the Gear 3 (2016) and the new Samsung Galaxy Watch has been an international bestseller, so review samples took some time to reach the Antipodes.

We will not make comparisons with the Apple watch (any generation) but suffice to say that this a) is a direct competitor for Apple Watch and b) works on Apple iPhones or Android smartphone – not just Samsung devices. Note that LTE calling does not work with an iOS device.

What is a Samsung Galaxy Watch?

The Samsung Galaxy Watch is its premium smartwatch with Wi-Fi, Bluetooth and optional 4G LTE capability (you can make and receive calls in all three modes).

It comes in 42mm and 46mm sizes as well as in rose gold and black versions (42mm) and stainless steel (46mm) with swappable standard 20 or 22mm watch bands that you can get from Samsung or most watchmakers.

The main design feature is the rotating bezel. It is the most intuitive interface I have used – and I have used many. Simply rotate the bezel clockwise or anti-clockwise to see different screens or press the settings button/tap the screen and rotate through installed apps.

Do not confuse this with the more recent Galaxy Watch Active (40mm) that is more a cross-over between a smartwatch and a fitness band.

All watches work with the Samsung Health app that keeps getting better and would please even a weekend warrior. And as a bonus, it supports the Samsung Pay app (or Google Pay).

Now that demand has stabilised you can find them online for a lower price. As LTE units use an eSIM, it is safe to buy locally or overseas.

I want to start with the specifications and comments on each

The 42mm is for smaller wrists, and apart from battery life, there are no compromises. 46mm is a big watch so try both on first before you buy.

Both have a sufficiently loud speaker to hold Dick Tracy style wrist conversations. The AMOLED screen has amazing 3D depth – it looks like a watch face.

For me – I suspect the 42mm in black is large enough for my style despite having about half the battery life bringing this in at about two days.

Having tried so many smart watches, I keep coming back to Samsung Health as one of the best all-around health apps – for me. It is impressive to see how far it has come over the years with one catch – the latest version requires iOS or Android 9 or later.

The heart rate monitor (HRM) is different from the Gear S3. It has a single green LED and four photodiodes for the best accuracy. Its automatic HRM (Always, Frequent or Never) is first class and as accurate as an external monitor or chest strap. It can also sense stress. It will not work if swimming as it requires skin contact.

Its sleep monitor shows four stages of sleep although I find it a little large to wear to bed and use an older Samsung Gear Fit Pro 2 for that as it also uses the same app.

If hiking it has a GPS and alti-barometer that shows height above sea level and barometric pressure. GPS was very fast to acquire satellites.

There are 21 trackable indoor exercises and a total of 39 workouts. These are replete with animations on what to do. I found that it was best to select the type of exercise instead of autosensing it – otherwise it seems to think you are doing much cycling!

It will remind desk workers to get up and move.

This is the watch to wear at work. The large, very clear and readable face shows notifications avoiding the need to access your smartphone.

When the companion phone is connected via Bluetooth or to the same Wi-Fi network, you can make and receive calls without the phone. Of course, the LTE option acts as a standalone phone using the same phone number.

The calendar and reminder functions are perfect and the day schedule function is great.

It depends on use. If you set HRM and stress to auto, 15-second face timeout (instead of AOD) and have normal use (walking, exercise, sleep) three to four days is achievable.

GPS will exhaust the battery in about 20-25 hours.

Music playback via Bluetooth is about 12-15 hours. I uploaded over 300 songs and had space left. It will display metadata (performer, photo, title, etc.) if known.

It is a proprietary WPC (not Qi) magnetic wireless charging dock – the same as supplied with the Gear S3. The dock supports both bracelet style bands and buckle bands. Charge time is 2 hours.

But WPC is a pain if you want to charge away from the dock. We don’t understand why it is not just a Qi standard that would allow it to reverse charge from the Galaxy S10.

Note that the Galaxy Watch can also charge via the $159 Samsung Wireless Charger Duo pad which has WPC and Qi. The newer Galaxy Watch Active has Qi charging and supports Samsung’s reverse charging on the Galaxy S10.

LTE but not on iOS devices

Telstra, Vodafone and Optus networks only. It requires a paired compatible smartphone and internet connection.

Telstra has a one number plan for $5 per month that links your mobile to the watch.

Optus has a $30/35 per month plan for the 42/46mm watch for 3GB data. It also offers a free number share if you have an Optus post-paid plan.

Vodafone has a number sync plan for $5 per month.

In theory, you can use its eSiM with any carrier – locally or internationally although bands 1, 3, 7, 8, and 20 may be limiting so check first before travel.

While my personal preference is to see everything go Google, this watch sells in China where Google is not available.

So Tizen offers a good alternative with a correspondingly small app store.

You access the Galaxy Watch Apps store via the Galaxy Wear App. There are thousands of free and paid watch faces to suit all tastes. There are tonnes of apps including Stravia, Map My Run, Speedometer, Spotify, Uber, and more.

In several years of using Samsung Health watches, I have never needed to pay for an app or watch face – perhaps my Scottish heritage.

The prime benefit of the Galaxy Watch is that it works with Android and iOS although some features are crippled there – Samsung Pay, Message response, SOS, Bixby, and SmartThings. Still, it gets notifications, and Samsung Health is not crippled.

It has great battery life, huge rotating bezel functionality and a screen to do it all. It supports Spotify playlists and download.

When rating this I have taken points off for WPC charging – otherwise its perfect.

If you only want one smartwatch, this is it.

Features
Value for money
Performance
Ease of Use
Design
Reader Rating0 Votes
Vivid AMOLED 3D daylight screen
46mm has a huge battery life, 42mm version is OK
Looks the part with the choice of two sizes
Samsung Health is a great general purpose health and wellbeing app
60,000 watch faces and thousands of apps – heaps of good free ones
eSIM pairing/number share is not too expensive
It’s a big watch when sometimes all you want is a fitness band
Rotten Apple cripples some of its functions
4.7