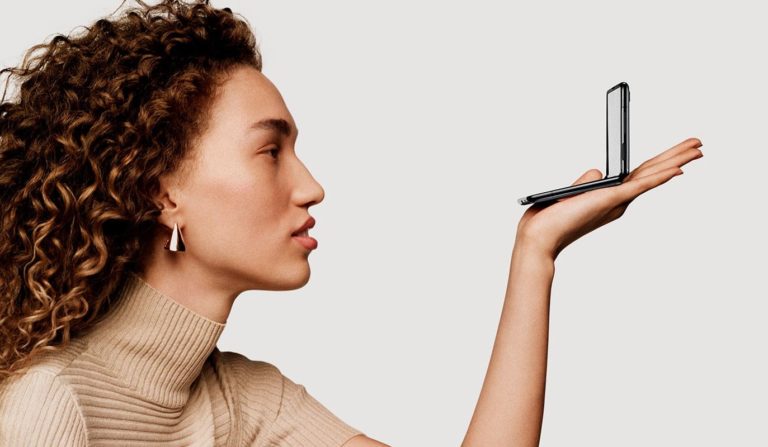 The Samsung Galaxy Z Flip was not so much released but announced – it is coming ‘soon’.

What is the justification for the Samsung Galaxy Z Flip? Well, fashion and style of course. Oh, and pocketability too.

Somewhere, someone, probably Motorola, invented a clamshell flip phone. Samsung, like Motorola’s new Razr, wanted an iconic flip that would defy a rational person’s sensibilities and desire a flip. Enter the Samsung Galaxy Z Flip and it is a real beauty.

I don’t want to compare the Razr and the Galaxy Z because frankly while both share the flip format, they are so different. Let’s just say Motorola has followed its roots and Samsung grew a new galactic set of them.

The Galaxy Z Flip harks back to the classic clamshell design we know and love, bolstered by the power of today’s technology. It is for those who appreciate design. Not only convenient, it has an elegant aesthetic – a statement piece for owners.

While I don’t want to compare the Razr to the Galaxy Z Flip, the specification differences are huge! The Galaxy Flip fits nicely into Samsung’s Galaxy Class with things like a 7nm processor, bigger battery with Wireless and Fast Charge, OIS camera and more. A Galaxy user may be happy with the Z Flip. Yet as we understand it the price is US$1380 (about $2100) so it undercuts the Razr too.

Sorry to dump specs on you but as you can see it’s a pretty high-end device.

Why would you buy a Samsung Galaxy Z Flip?

It makes a statement; it does not lose too much in translation and it does most things you expect of a Galaxy-class device.

While we are conditioned to carrying a large glass slab, this offers an alternative for the ‘Kim Kardashians’ of the world that “Absolutely must have it darhling”.

I like the video flip mode – that would be very handy as well as a bedside alarm clock.

Media will complain that there is a perceptible ‘crease’ (how else do you fold a phone) and many will try to break it but, subject to that one caveat it may set a new trend.

Samsung has applied its innovation to the Flip format and made the best Flip yet.