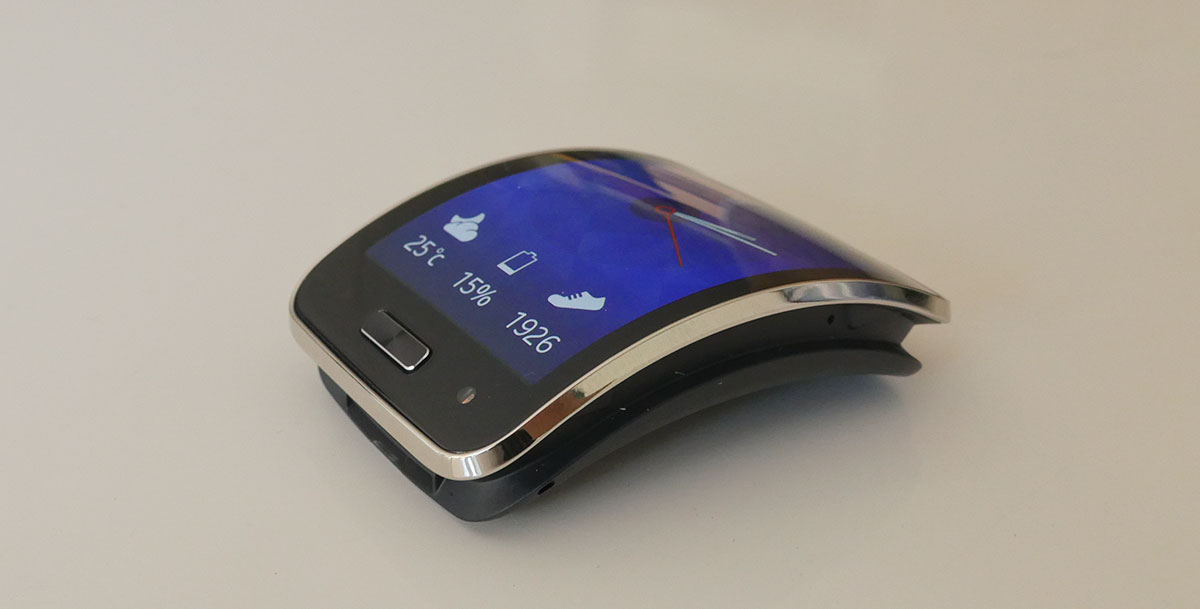 Is it a phone? Is it a watch? These are the questions that you’ll likely think up when you see Samsung’s latest smartphone-watch hybrid, an evolution on its original Gear smartwatch that will let you make calls from your watch when your phone isn’t even nearby.

I’m sitting in the GadgetGuy kitchen-shaped boardroom talking to my wrist, and I feel like a bit of a fool The phone sits on my wrist, disguised as a curved watch, and this writer is speaking into it, while everyone else hears my conversation.

This isn’t how phone calls generally work, and I don’t make a habit of communicating my life for everyone to hear, preferring to speak directly into the phone or with headphones on.

Four days into using the Samsung Gear S, I’m not sure if I would recommend this to all beyond the most die hard tech enthusiast that owns another Samsung smartphone, and while I can see some of the ideas Samsung is trying to get across in its convergence of timekeeper and telecommunication device, this might need a little more time before it’s ready for mass consumption.

When it comes to experiments in smartphones, few do it like Samsung. The company has been toying with wearables for longer than most other successful companies, and in its Gear S, is trying to find a bridge between phone and watch in a way no Android Wear device is trying.

This product is a first for quite a few things for Samsung, with the first nanoSIM slot in a Samsung product to reach Australia, the first easily found Tizen phone once again found in Australia, and the first time a Samsung curved screen has ever graced wrists (because it’s a watch), and if any of this sounds like jargon, hold on, because we’ll deal with it shortly.

Let’s start with the basics: Samsung’s Gear S is a smartwatch with a little more added to it, taking the form of a wearable computer for your wrist, with a bunch of sensors and computing power under a screen.

That screen is worth mentioning in detail, because Samsung has taken a 2 inch curved Super AMOLED touchscreen and made it run the resolution of 360×480, with the combination of size and resolution producing a device that shows 300 pixels per inch, a pixel clarity higher than most wearables we’ve seen, and only 25 pixels off Apple’s “Retina” grade screens.

Under this display is a dual-core 1GHz processor paired with 512MB RAM and 4GB storage, with this system running the lesser known operating system Tizen, which is connected with Samsung, but is also developed by Intel as well as the Linux Foundation.

As a result of the Gear S using this operating system, this smartwatch will not take apps from the Android store, and comes with the requirement of needing a Samsung phone to take the watch through its first setup, as well as get a lot of use out of the watch.

You’ll also find some wireless connectivity here found through 802.11b/g/n WiFi, Bluetooth 4.1, GPS with support for GLONASS, and a nanoSIM slot with the watch able to operate as a phone when a SIM is inside the watch.

Ruggedisation can also be found here, with IP67 certification, meaning it is technically dust resistance and can survive a close encounter with water in up to one metre of liquid for up to 30 minutes.

Sensors are also found here, with your typical accelerometer, compass, and gyroscope joined by a heart-rate sensor and a UV light sensor.

A strap comes mounted to the Gear S smartwatch, but this can be removed if needed, unlike the battery which is not removable and is rated as 300mAh.

We’ve seen quite a few smartwatches over the past year or two, but the Samsung Gear S may well be the one of the more interesting gadgets we’ve seen the traverse this category, stepping in as both a smartwatch and a smartphone.

When you pick up the watch for the first time, it’ll be clear that Samsung hasn’t designed this like an ordinary smartwatch, and we say “ordinary” carefully since the whole smartwatch thing is new as it is.

Instead of the typical square or circular screen, the Gear S relies on a curved rectangular screen, and it’s not curved like the subtle curve the Galaxy Note Edge brings.

Rather, this is totally curved, stretching across your wrist in an arc, almost as if the watch was trying to conform to the slope of your arm.

That said, its size is very noticeable, and if you like a smaller watch, you will not be into the design or style Samsung is presenting here, with the Gear S resembling more of a gadget for your wrist rather than the holder of time.

And that’s fair, because the Gear S does so much more than tell you where the sun is positioned in the sky.

For instance, it can pick up phone calls, make phone calls, read your text messages, tell you the weather, what the ultraviolet level is like outside, control your music, tell you how many steps you’ve run, let you read the news few images, and even find your phone in a pinch if you’ve left it somewhere in the home and you only have access to your watch.

But it is large, and the size won’t suit all, so try it on before plonking down the $449 this thing costs.

At least the band is replaceable, though unlike some other smartwatches, this is a totally proprietary band, so you’ll need to buy another from Samsung, and we’re not sure how many of these will be easy to find.

For most, the included band should be fine, and all you really need to do is change the button holes on the clasp to make sure it fits.

You may find every so often the clasp doesn’t click into face, doesn’t hold position, so just make sure to feel that firm connection otherwise that watch will fall off your wrist.