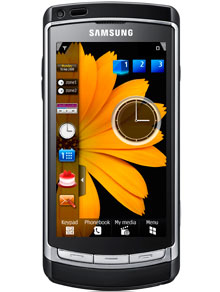 Cameraphones have been catching up to dedicated digital cameras for a while now – Sony Ericsson even uses its Cybershot brand on its best camera phones. But while 8 megapixel-standard cameras have been in mobile handsets for a while now, it’s a rare treat to find a mobile phone with the grunt to take on a camcorder. Enter the Samsung HD Icon: with an 8 megapixel camera and the ability to record 720p high-definition video, this phone is a direct challenger to some of the standalone high-def video cameras out there – and it’ll make calls to boot.

Let’s start off with the screen. Quite simply, it’s massive. The 3.7 inch, 16:9 touchscreen is the biggest I have ever used, and the touch operation is smooth as silk. While HD Icon boasts 720p playback and recording, the screen itself is only 360×640 pixels – the same as Nokia’s new N97 – but the AMOLED technology makes this one simply stunning to look at, giving bright, clear lines from any angle.

And the big screen is perfect for the HD Icon’s next big feature: an 8MP camera with 720p video recording. Now the 8MP camera on its own is an impressive thing – autofocus works a treat and menus are delightfully simple to use on the touchscreen. It’s let down by an LED flash which could use an upgrade and the lack of a lens cover (you’ve got an HD camera here, you don’t want that lens getting scratched in your pocket!), so it’s not really a replacement for a standalone digital camera but it is up there with the best cameraphones on the market. Smile detection and geotagging are handy additions too.

Video recording is a snap, and the HD Icon’s 720p recording resolution is simply brilliant. You can record HD videos up to 2GB in size (about 30-40 minutes) and it really is as simple as hitting the record button. An additional treat: If you own a DLNA-enabled TV, you can stream those HD videos to your screen over your home Wi-Fi network. DLNA (Digital Living Network Alliance) is hoped to become the standard for connecting all your digital devices over Wi-Fi, so you can stream media content from mobiles, PCs and TVs etc around your home. Support for DLNA is growing, but is hardly mainstream yet – it might be a great feature which you never get to use with the HD Icon. Regardless, you can always just use a TV-out cable to watch content on a big screen.

But the Samsung HD Icon is about more than just the impressive camera. It’s got simple-to-use multimedia features: music player with extensive format support, video player which plays DivX and WMV files as well as mp4 (another handy feature), and so much storage space for all your media content – with 16GB onboard and an expandable microSDHC slot up to 32GB, meaning up to 48GB of storage!
The HD Icon can fit more than pretty much any other phone out there.

The HD Icon actually runs Nokia’s latest Symbian OS, featured on the new N97 and 5800 Xpress Music. Ironically, the Samsung runs Symbian better than either of the Nokias – menus are a cinch to navigate and the device responds quickly to every touch. But Symbian is showing its age – the web browser is dated, and while you have the option of using email it’s not a pleasant experience. But the up-side is you’re able to access all Symbian apps (there are plenty of them on the internet), it’s just a shame Samsung doesn’t have a one-stop app store like Apple’s or Google’s Android Marketplace.

Other features include GPS, navigation and a digital compass, as well as Samsung’s TouchWiz UI which allows you to drop widgets on your home screen – giving easy access to music players, Facebook, YouTube, radio etc. There is also a simple podcast app, instant messaging, and location-based services – none of which are extraordinary, but all useable.

The Samsung HD Icon is world-beating in some areas but behind the game in others. It wins big points for its epic screen, first-class camera, media support and big storage capacity. It loses points for its dated operating system, lacklustre web browser, poor email support and lack of access to new applications. But despite its shortcomings, it’s a must have for amateur filmmakers who want to have an HD camera in their pocket and a media-savvy iPod replacement too. The Samsung HD Icon is easily one of the top five handsets available today.

A note on pricing and availability

This review has been published before any pricing or carrier details have been announced, however at the press launch of the phone it was thought that the HD Icon would if available for outright purchase be somewhere around the $1,000 mark.More details are expected at the August 20 launch of the phone.

Still no pricing, but the carriers of the HD Icon will be Crazy John’s, Optus and Virgin, and it will be in stores in September 2009.