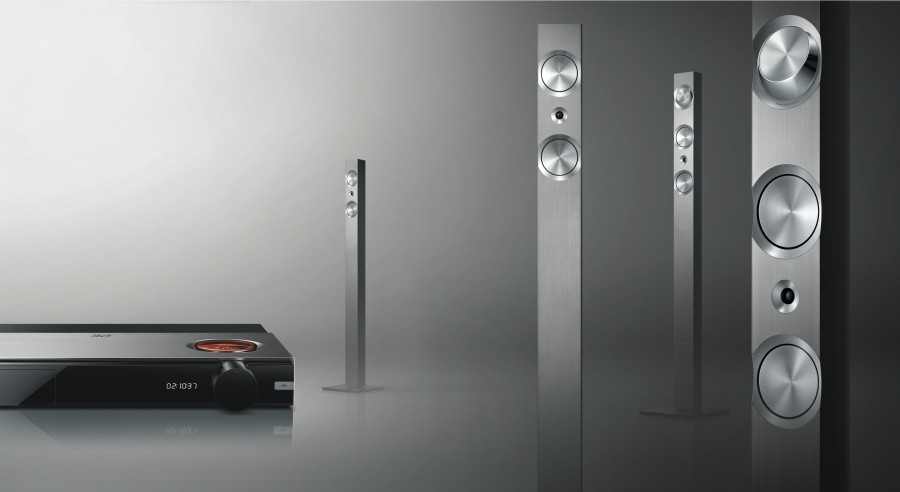 In these days of high quality large screen TVs, your viewing experience isn’t complete without an external sound system. Okay though they might be for the broadcast news, I have yet to see a TV with built in speakers that can do anything near justice to the sound of a movie, especially a HD movie presented on Blu-ray.

So let’s see what you can get from such a system: Samsung’s top of the line Series 9 HT-F9750W home theatre system.

This consists of four tower speakers, one compact centre channel, a subwoofer, a wireless receiver/amplifier for the rear channels and a nicely styled electronic component which does most of the work. Plus a remote and all the speaker cables.

The receiver/amplifier acts as a multichannel amplifier, a CD/DVD/Blu-ray player and a network media player. It’s attractively finished in black and brushed aluminium, with a round window through which you can see two vacuum tubes which are part of the preamplifier. They are supposed to add ‘warmth’ to the sound. I suspect they come a long way down the pecking order when it comes to significantly affecting the sound quality, but their orange glow does look rather nice.

This unit packs six power amplifiers. One is for the subwoofer, which is a passive unit, while another is for the centre channel. The front and right towers each get two power amps: one for the three-driver, two-way assembly in each that does most of the work, and one for what Samsung calls the ‘Front Top’ speakers. As the name suggests, they sit at the top of each of these towers. They can can actually swivel up and down a little within their mounts. In practice they are little used unless you select one of Samsung’s DSP modes.

The centre channel is also a three-driver, two-way unit, as are the two surround speakers.

The power amps for these two speakers come in the separate wireless receiver that comes with the system. That eliminates one major issue with many surround systems: the trailing of speaker cables from one end of the room the other. Now all you need is a power point at the back of the room.

The player/receiver can upscale the video output to Ultra High Definition and supports 3D Blu-ray discs.

The network function are a large subset of those provided by Samsung Smart TVs. You can stream video from YouTube and TV catchup services, such as ABC iView, and subscription services such as BigPond Movies and Quickflix. Facebook and Twitter apps, and games and a fitness apps and even a web browser, are provided. You can connect to the network using Ethernet or wirelessly.

Samsung makes this unit easy to set up for both the experienced user and the novice. The supplied wires are colour coded and most are pre-attached to their respective speakers. There’s a little assembly involved for the tower speakers, but its straightforward. Each of these has a 250mm square plinth on which to rest, so they are fairly stable.

The system starts up the first time with a wizard to guide you through network and speaker settings. A small microphone comes with the system for automatic speaker calibration.

Having listened to many dozens of irritating test tones over the years, it was a pleasant change to hear a brief snippet of classical music (Russian, I think) used as the test tone. At the end, the settings seemed right except that the levels in the surround speakers were rather too low. I bumped them up manually by 3dB for much better results.

The audio performance was generally quite good, taking into account the overall price and facilities provided in the system. In multichannel mode it produced plenty of clean sound, filling my room rather well. The sound was quite well balanced, too, across the frequency spectrum, including the upper bass. The subwoofer did tend to sound a touch boxy and uncontrolled and peaked quite strongly in the mid-bass, with the output falling away quickly as the audio descended into the deeper registers. There wasn’t much floor shaking with this system.

Do note that while Samsung refers to this system in a couple of places as offering 7.1 channels, and even though it does in fact have 7.1 amplifiers, it is not properly a 7.1 system. Any Blu-rays you have with 7.1 channel sound will decode as 5.1 channels, with the centre rear channels folded into the normal surround ones.

The ‘Smart’ stuff was simply excellent. The system features a twin core processor. This was not as responsive as the processors included in Samsung’s most recent top-end televisions, but it was still pretty quick. In addition to the online functions, I particularly enjoyed the ability to stream music, videos and photos from my network server. Even HD video streamed well (using the WiFi connection), and the unit warmed my heart by supporting FLAC (Free Lossless Audio Codec) music files, including the 192kHz, 24 bit ones. Only the stereo ones, though, not the 5.1 channel ones. That means that there are no serious limitations to the quality of your music sources. In fact, the media support is extremely wide, including such relative rarities in music as Vorbis OGG and Monkey Audio (don’t worry if you don’t know these formats. Those who do know of them will appreciate the capability). It also supports, in addition to the usual picture formats, MPO stereo photos, and way too many video formats to list.

You can stream from your portable music player too, most likely. You may need to add DLNA server software to your Apple device (Android ones usually come with this). Or you can use Bluetooth.

The Twitter, Facebook and Web Browser apps are rendered far more usable by the keyboard and mouse support via the front USB socket. I’d suggest a wireless combo.

I think if you chose very carefully you could come up with a better sounding 5.1 channel sound speaker system, Blu-ray player and receiver for the same price. Probably. But you would not come up with both that and a system that is as well implemented, nor with the network smarts and the excellent network media support.

NOTE: A big thank you to Harvey Norman! The review unit was provided without a remote control, without which it was unusable, and a replacement could not apparently be found. My local Harvey Norman came to the rescue by lending me one from their floor stock.