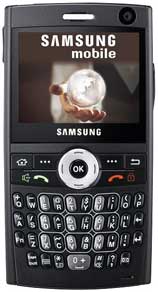 Clearly modelled on Research in Motion’s BlackBerry, Samsung’s BlackJack is a very capable smart phone, rivalling most PDAs in terms of features and capabilities. With its sleek and simple design, it’s a product that will appeal to those who like a little sex in their business phones, and if you want a phone that has a full keyboard but doesn’t look like it needs a trip to fat camp, the BlackJack is the answer.

It supports tri-band GSM as well as 3G and HSDPA (we tested the Optus version running on Optus’ 3G network). It has Bluetooth support and the model we looked at sported Wi-Fi capabilities as well. Much like the BlackBerry, it has a fantastic widescreen display set above a full qwerty keyboard, and a 1.3 megapixel camera can be used for both taking pictures, filming video and for video calls. It only has 42MB of internal memory, but that can be boosted by the addition of a MicroSD card.

All this runs on the Windows Mobile 5.0 operating system, and though we struggled manfully to overcome our dislike of the OS, we failed. Microsoft has tried too hard to bring the Windows PC interface to the mobile phone and it really doesn’t work. It’s slow, and navigating the system is rather painful, made more painful by the too-fine directional switch and jog wheel. For the former, it’ll be a good idea to keep the nails on your thumbs long to help with the control.

The same can be said of the keys. They actually work quite well, but they’re small enough and cramped enough that, unless you use fingernails to press them, you’re going to press several keys at once, often as not. The numbers are actually integrated into the qwerty keypad, as shift functions on certain letters (although you don’t have to shift when dialling). This takes some getting used to, and for a few months at least you’ll be doing the hunt and peck when trying to dial. Thankfully the keys are backlit.

The integrated camera, while not as high resolution as some of its recent competitors, takes excellent photos, with good focus and white balance. It would have been nice if there were camera buttons on the chassis of the phone itself (rather than having to navigate through Windows Mobile to get to the camera functions), but it otherwise works very well, with a very clear preview of the photo appearing on the phone screen.

The BlackJack supports push email, much like the BlackBerry, but only through a limited number of providers (including Microsoft’s push service). You can also set it up to draw email from regular POP accounts (that is, standard internet email accounts like those you use on your PC).

For those who like a little multimedia mixed in with their business applications, the BlackJack has you covered. In Media Player for Windows Mobile, it has a decent MP3 playback system, with the capacity to sort song by artist, album, genre or most recently played. We were particularly taken with its podcast support, which can automatically download from internet feeds and store podcasts on your phone.

Sleeker and prettier than your typical keyboard-sporting mobile, the BlackJack is a powerful phone with tons of features, including some great multimedia options. It supports most networking options (including Wi-Fi for when you’re near an access point), has excellent messaging tools and the ready capacity for more applications if you choose to install them. But it’s not all great: the operating system is slow, unintuitive and frequently painful; it can be difficult to press just one button and it would be nice if there were quick access buttons for more than just email. Still, it’s a nice business and home phone, rivalling some of the best smart phones on the market.