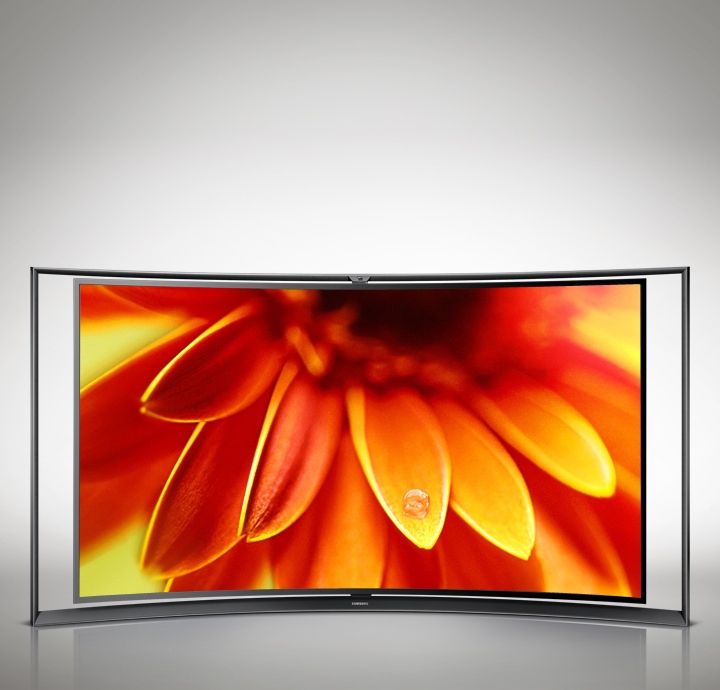 Finally they are here: OLED TVs. OLED is a newish panel technology and stands for Organic Light Emitting Diodes. LEDs emit light when an electrical current is run through them. OLEDs use organic materials for this purpose. Each pixel in an OLED TV generates its own light – there are no backlights. That allows the TV panels to be even thinner than other technologies, and in some versions can even be flexible.

The Samsung KA55S9CAM takes advantage of this by offering a curved face. The 55 inch (a hair’s breadth short of 140cm) panel is 12mm thick, but is curved so that the centre of the TV is about 4 or 5 centimetres further back than the edges.

Normally we give dimensions for TVs without their stands attached, which is what you need if you plan to wall mount it. But this one isn’t really suitable for that function. There are no rear mounting points, and the TV is pretty much stuck in its stand. This TV, stylistically, makes a statement.

Stylish – even extravagant – it is. The TV panel is surrounded by a wider metal frame that doubles as the stand. There’s about 100mm of free space between the edge of the panel and the exterior frame. It seems to serve primarily a decorative function.

The rear of the TV is smoothly finished. There’s an inset in the centre back for just two cables (a panel clips over the top to hide these). One is for power and the other is a special cable by which the panel is connected to an external box of electronics. This measures 360 x 25 x 80mm and has the aerial, USB, HDMI and other connections around its edge. It contains the TV’s electronics as well, except for the actual screen driver. This is powered by the same cable by which it feeds a signal to the panel.

Samsung says that the TV may be upgraded in the future in a similar manner to its other high end TVs’ ‘Evolution Kit’ upgrades. In this case it would be a matter of replacing this external unit.

The TV offers full HD resolution. Built into the frame is a camera for use with the various Smart functions, including Skype and Samsung’s Smart Interaction features, including Voice and Motion Control. It is fully internet-enabled and has the usual Samsung control options, which is to say very advanced ones. In addition to a regular IR remote you get a smart touchpad remote, which allows quite efficient navigation on the Smart screens. Android and iOS apps provide for control from phones and tablets and there is also a level of voice and motion control. All this control and the Smart stuff is identical to Samsung’s current high-end LED LCD TVs, so you can read about it in our previous review (https://gadgetguy.com.au/product/samsung-ua55f8000-3d-lcd-tv/). In short, though, this TV’s smarts are up there with the very best currently available.

But that’s not really the major point of interest with this TV. That is the panel. And that, in turn, has two quite separate points of interest about it. One is the curve, the other is the OLED.

Of course, the curve is made possible by the OLED, but does it enhance the picture in any way? I didn’t really think so. Nor did it detract much either. One thing about OLED is that even at extreme viewing angles the picture remained balanced in colour and contrast, more so than the best of LED LCDs. However at those extreme angles the picture was more distorted geometrically by the curved screen than by a flat screen.

Straight on or at moderate angles there was little difference in viewing compared to a flat screen. But one thing it will do: if you buy one of these TVs the curve and the general styling will certainly attract attention from your visitors, even those normally indifferent to televisions.

As for OLED, the technology’s strengths were clearly evident. Initially the picture looked pretty harsh, but that was only due to the ‘Sharpness’ control being turned up too high. Bringing that down to its proper level made the picture look smooth and attractive. There were perhaps certain expectations about OLED colour performance being particularly dazzling, or something. But that wasn’t the case at all. The colours were just right, not greatly different from a top-end TV based on different technology. Which, when you think about it, is as it should be.

As we’ll see, though, the real strengths of OLED – amazing blacks and exceptionally switching fast speeds – are what set this TV apart from the regular LCD/LED crowd.

The blacks seemed to be amazing. They almost certainly were. Unfortunately I spent my hours with this TV in Samsung’s PR firm’s offices rather than in my usual environment. I could not get the place as dark as would have liked. But nonetheless it looked like the TV was perfectly capable of ramping smoothly down to full black in one part of the screen while another part was full white. And the two parts could be pixels right next to each other. With a white dot on a black background test, the only glow around the bright bit was from light scattered by the glass surface of the display.

So although the colours weren’t ‘dazzling’, they were delivered with complete assurance since they were underpinned by essentially perfect black levels.

Samsung has with this TV delivered something very special in the 3D department: essentially perfect 3D performance. Even the best of Samsung LED LCD TVs still have a little ‘ghosting’ or ‘crosstalk’, in which a little of the stuff that’s supposed to be seen only by the left eye leaks through to the right and vice versa. There was none of that with this TV. None. At. All.

As a result the 3D effect was glorious. It had depth, clarity and provided superb engagement. The 3D system is ‘active’, so it has flashing shutters, but there was no sense of flicker.

The eyewear is very lightweight and thus comfortable to wear. And each of the two provided sets has built-in earbuds, which can be easily detached and plugged into your ears.

Why? Because Samsung is offering in this TV a viewing mode called ‘Multi View’. With this, programming from two separate video sources can be shown at the same time, with the TV flickering rapidly between them as though they were the left and right eye portions of a 3D picture. But in this case the glasses can be set so that they allow only one of the inputs to be seen. And, of course, the matching sound to be heard through the earphones. The sound for the  programming on the other input can be heard through the TV’s speakers.

Samsung has incorporated two speaker plus shared woofer audio into this TV. This was perfectly serviceable for things like the evening news and perhaps a sit com. It could be turned up fairly loud with no rattles nor excessive distortion. But, as is almost always the case with TVs, it was predominantly a midrange audio delivery system. You will enjoy your shows much more if you add a decent sound system.

With the KA55S9CAM OLED TV, Samsung had introduced this new technology to the Australian public in a fitting product. The black levels are brilliant. The colour excellent. The 3D as good as it gets.

This TV promises a very bright future for OLED.