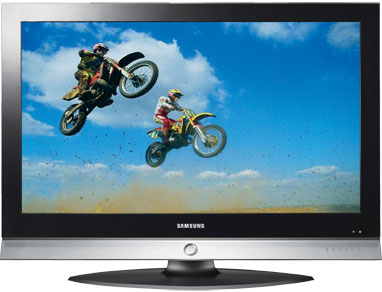 The latest big screen LCDs, such as Samsung’s LA46M51B, can manage a resolution of 1366 x 768, which makes them capable of handling a 1080i high-definition signal. An HDMI connector gives you a digital input, although there’s no internal digital television tuner, so you’ll need an external set-top box.

The LA46M51B has some impressive specifications. Its brightness is 500 cd/m2, which is lower than most plasmas, but higher than many other LCDs. Contrast is also a high 3000:1, which stacks up well against even the better plasma screens.

The 8ms response time is also a plus, and virtually eliminates the motion blur problem that plagued earlier generation LCDs, making it perfect for watching sports. An interesting feature is the My Colour Control, which lets you change the colour balance and manipulate how individual colours are displayed to suit your tastes.

Like many LCDs, the Samsung unit is relatively expensive, so be sure to compare it to similarly sized plasma screens.