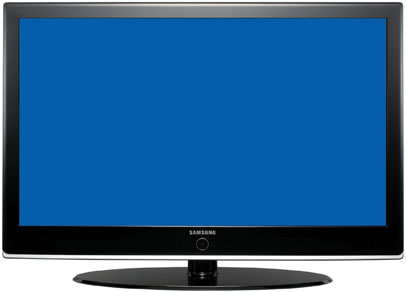 You’ve got to admit that TV engineers are clever. LCD TVs have been held back for years from being truly top notch TV systems by one major flaw: their inability to produce really dark blacks. The basic LCD panel itself doesn’t produce any light, it is just like a sheet of tinted glass, except that the tints can change. The light comes from a backlight behind the LCD panel. But the panel’s sections can’t go opaque enough to totally block all that light, so they won’t go completely black.

So what did the engineers do? They solved it!

A couple of years ago a typical LCD TV had a contrast ratio of around 1,000:1. That was the ratio of the brightest white it could produce to the darkest black. But the Samsung LA46M81BD LCD TV has a dynamic contrast ratio of 15,000:1. The whites haven’t gotten any brighter, but the blacks have got a lot darker.

This trick is achieved by varying the brightness of the backlight. During dark scenes it is turned down, allowing the whole scene to go much darker. It also means that the different shades of near darkness can be discerned, so you can see things happening in a movie that would be washed out in older LCD TVs.

There is more to this TV than just that. There is the 117 cm (46 inch) screen itself, which produces a very large picture, encompassed by an attractive gloss black surround. There is the massive resolution of 1,920 by 1,080 pixels.

There are the three HDMI inputs, one conveniently located on the side along with regular A/V inputs. There is the built-in high definition digital TV tuner. And there is Samsung’s excellent digital processing.

It is this part that puts this TV above just about all the LCD competition. In addition to managing the brightness of the backlight, it scales up your DVDs to the correct size for the TV’s panel, and processes the signal to give the best possible results with the TV’s own display characteristics.

Unlike quite a few other TVs, it seemed to me that Samsung’s processing delivered results more commonly associated with the famed Faroudja DCDi electronics. In particular, there was a ‘Movie Plus’ setting that seemed to replicate DCDi’s effect, ensuring that instead of the half-resolution display many TVs produce with standard definition TV, the full sharpness of the picture was delivered.

Even better was HDTV, which appeared on-screen with extraordinary clarity. And even better than that were both HDTV and Blu-ray. The best movies on these media were a true delight to behold.

Especially as, when the dark scenes did appear in movies, it was easy to see exactly what was happening in those fumblings in the dark.

The Samsung LA46M81BD LCD TV shows that faced with just about any problem, engineers will find a way of defeating it. This is one marvellously high quality TV about which it is difficult to find any complaints at all.

Overall
Features
Value for money
Performance
Ease of Use
Reader Rating0 Votes
Excellent black levels, true high definition display, top notch digital processing of signal to produce the best results.
There really is little to be said against this TV.
4.2