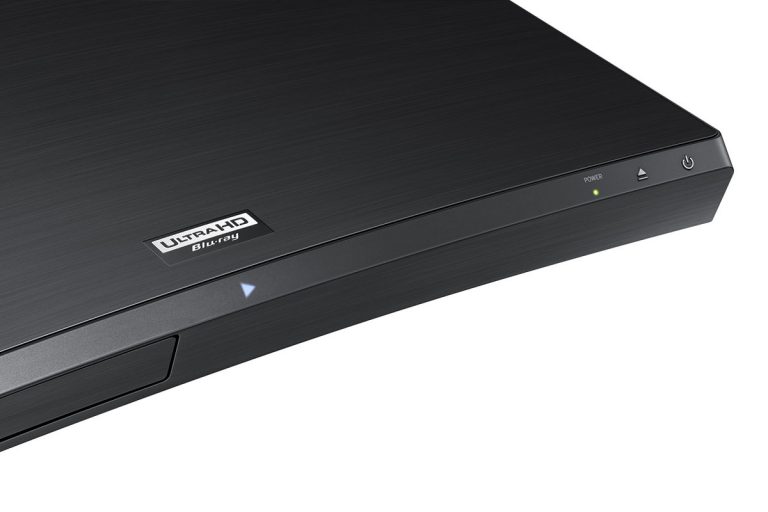 Both feature curved styling, and neither has a front panel display. You interact with them using their on screen displays. If you’re using a recent Samsung TV there’s a seamless interoperability with the TV’s remote control.

The cheaper model – the UBD-M8500 – does all the stuff that you need from an UltraHD Blu-ray player. Not least is the ability to deliver Ultra High Definition resolution – 3840 by 2160 pixels – along with wide colour and high dynamic range. As is Samsung’s practice, it looks like it doesn’t support the optional Dolby Vision higher dynamic range feature which may appear on some UltraHD discs.

This model has only one HDMI output. If you’re plugging it directly into a recent model UltraHD TV then that is all that you need. Likewise, if you’re using a recent home theatre receiver with support for UltraHD. However, if your receiver is a few years old, it likely won’t be compatible with HDMI carrying UltraHD video. In that case you’ll be after a player with two HDMI outputs.

Which is one of the additional features of the UBD-M9500. The second HDMI output carries only audio (wrapped, for technical reasons, in an anodyne video signal) so that it should work with just about all HDMI-equipped home theatre receivers.

One of the other premium features is the ability of the player to stream content from the player to your smart phone or tablet, or to other compatible devices in other rooms. It will also handle 360° content – you’ll be familiar with that from Google Maps Street View – and allows you to move the image around so you can look in all directions.

Finally, there’s a “Private Cinema Mode” which allows it to connect to Bluetooth headphones for audio playback, so you can watch at your preferred level without bothering others.

Both players are available now from the usual Samsung retailers.