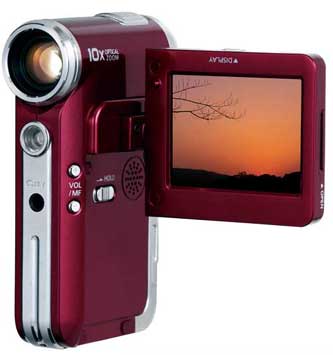 David Smith was sent the new Samsung Miniket Sports model for testing. Designed for the adventure-seeker on the go, he tells us his thoughts.

Another masterpiece of miniaturisation, the tiny, rubber-coated Miniket Sports camcorder from Samsung has some very unusual features. It’s a multi-function unit that can record MP4 video, stills, MP3 audio and voice recording. It can also store files in a folder structure like a computer, so you can use it as a mobile database.

The Miniket comes with a host of accessories starting with a serious-looking hard case that includes an aluminium shackle to secure it to your climbing gear, skydiving harness or life jacket. The camera is billed as ‘weatherproof’ and is clearly pitched at people heavily into action sports who want a tiny, lightweight but capable camera to record their adventures. One real disappointment with the case is that it doesn’t seal tightly – there are big gaps where the lid meets the case and these are guaranteed to let dust, sand and water in. Such a simple thing and a properly sealed case would really help keep the camera safe from nasties. I know the camera itself is fairly well sealed but even so?

A tapeless video camera, the Miniket records 720×576 pixel video on its own internal 1GB memory. Optionally it can also record onto a removable Memory Stick Pro (up to 1GB). At superfine quality, the internal memory provides about 22 minutes of recording.

The Miniket Sports has a 10:1 optical zoom lens starting at f=2.4 and is reasonably bright with an aperture of f=1.8-2.4. Sound is recorded at only 8kHz 16bit stereo so don?t expect too much in the way of high fidelity.Â There is a small fold-out LCD viewfinder which is quite bright and reasonably sharp. Unfortunately, the base of the camera is so small that when the viewfinder is out the camera won’t sit upright on a flat surface – it just tips over! The viewfinder does, however, rotate through 270 degrees so, yes, you can frame yourself for those news-style pieces to camera!

An External CMOS Camera thrown in for good measure!

The most interesting accessories start with a plug-in ‘lipstick-cam’. This 8 cm x 2.5 cm camera comes with a rubber case that enables the lipstick-cam to be attached to your helmet, bicycle handlebars or whatever. This external CMOS camera records at up to 640×480 pixels. There’s a metre of cable to attach it to the main camera plus another 1-metre extension cable if required. Obviously you can mount the main camera somewhere safe, inside your jacket or on your belt, and then run the cable to the tiny camera head. This makes for an extremely flexible and unobtrusive system for recording outdoor activities.

Two Lithium-ion Polymer batteries are included, giving a reasonable life of up to about 80 minutes using the supplied 900mAh battery. Interestingly, the camera gets quite warm to the touch when it’s running – almost needs a heat sink on the battery!

Controls are fairly straightforward with a series of buttons running vertically down the back of the camera. At the top there’s a zoom slider/combo switch that also functions as a menu selector. Below this is the red record button, then the power on-off switch which also allows you to switch between the various modes of operation: Video Record, Photo, MP3, Voice Recorder and File Browser. Within this menu there’s also a basic System Settings submenu that lets you adjust the viewfinder, set auto-shutoff duration and turn off the annoying selection Beep.

To escape this menu you press the left side of the Combo Slider and you’re back in business.
Next button down is the Menu button, which takes you to a series of context-sensitive submenus. Here you can select the video source, which can be Line-In (for the lipstick-cam) or Normal. The lipstick-cam can’t be zoomed and it’s not really as wide-angled as I would prefer. It does have a tripod socket however, so it can be firmly attached to whatever you like using a standard tripod or grip mount.

I found that having two slider switches on the back – the zoom/selector and the mode switch – a little confusing. It can be difficult to remember which one to use to find particular features in a hurry.

Finally the back panel features a large rubber covered slot for your Memory Stick Pro.

On the front there’s a small light beneath the lens and a combined headphone/AV socket. This is where you can plug in the lipstick-cam or else record analogue video using the supplied connector.

Focus defaults to auto but there is a manual option using two tiny buttons just ahead of the viewfinder. These double as volume controls but they?re not that easy to use for focussing. With a camera of this type you’ll probably just leave it on full auto.

The main camera also has a tripod socket beside a narrow custom slot through which the camera is attached to its docking station. This is protected by a tiny rubber grommet that is not actually hinged or otherwise attached to the camera. It will get lost and that’s where the danger of grit getting into the connector through the case lid will become a problem. The tiny rubber grommet also protrudes about a millimetre from the base ensuring that you can’t just sit the camera on a horizontal surface – again it tips over.

I have written elsewhere about how I feel many modern videocameras are ‘too small for comfort’. I would say the same about this one in terms of overall ergonomics, but for the fact that the Miniket is really designed as a special-purpose camera and also as a base unit for the lipstick-cam. Therefore its small size is justified by its special role.

Viewing and editing your video

Getting to see the pictures took a little time mainly because the test camera arrived without the software CD or manual. I plugged the camera into its docking station and connected it via USB to my computer. It was recognised immediately and I found a folder containing my newly shot video MPEG4.avi files. I tried viewing it in Sony Vegas, Windows Media Player and Quicktime and got a black screen with audio. This would have to be one of the very few file types Vegas cannot recognise on the timeline but once the software disk arrived I discovered why. The software Samsung bundle with the Miniket is called Pixela Image Mixer and it loads a DivX Pro codec during installation. It still wouldn’t work in Vegas or Quicktime but it did play my video in Windows Media Player.

In the limited time available before completing this review I tried to use the Image Mixer software, but was fairly unimpressed. It’s entirely wizard-based and the icons are not always easy to understand, nor are there screen tips to help figure out what you’re supposed to do. It does work, but even on a Pentium 4 with plenty of RAM the software was very sluggish and slow to respond. Not really a good experience. With more time I would probably figure out how to render each captured clip into a format that Vegas would recognise then just edit in Vegas. But it certainly wasn’t obvious how I should go about that. I think this aspect would prove very challenging for novice users. Experienced users will probably want to give this software wide berth.

I did capture some screenshots, which show that the quality, although amazing in such a tiny camera, is really not very good. Screenshots are a harsh test of video because I find the moving images seem sharper and give a better overall impression. Likewise stills taken on the Miniket are of limited use given that the sensor is just 800K (320K on the external camera).

At around $1,100 this is a fairly pricey camera, especially since it only records to Mpeg-4 and not full DV quality. I suspect the market will be limited to those who want to exploit its adventurous possibilities in extreme sports because although it doubles as a stills camera and MP3 player and file manager – which is of course the intended market. However, if you wanted a good video camera you’d be better off looking at some of the bigger mini-DV tape-based cameras that abound. Certainly from my perspective, if I was jumping out of a plane I’d want the very best quality video record of the event for my relatives to see after I died of heart failure – and I don’t think I’d choose this one under those circumstances.