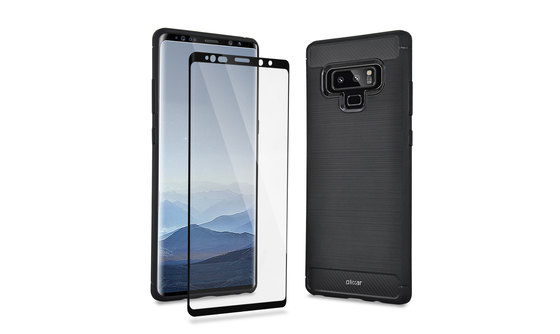 The Samsung Note 9 is due for release on 9 August at a Samsung event in New York. There is a tsunami of rumours on the web. Believe what you will.

What we do know is that at least one version comes with a Gold Stylus. According to filings with U.S. Federal Communications Commission the Samsung Galaxy Note, 9 S Pen will include Bluetooth technology.

If this is the case, the pen will need power. Either a hearing aid-sized battery or draw power from the screen. It could also mean the button is programmable. For example, as a remote camera button, microphone or voice activation.

The case and accessory maker Olixar has released its Note 9 cases, and screen protectors (web site here) and apparently includes official renders. These cases come in Black, Purple and Blue. The phone should come in Gold, Purple, Black and a new Royal Blue.

It shows a very Samsung Galaxy S9+ style with possibly thinner bezels and phone. It retains the 3.5mm audio jack. There appears to be an extra button – perhaps a dedicated camera shutter. The 4K AMOLED screen size could be 6.4-inch – slightly larger, yet the device may be slightly smaller.

The Note 9 camera is a dual lens in horizontal format.

There are rumours that Samsung will use a new 3-stack ISOCELL sensor. This has integrated DRAM to capture super slow motion, real-time HDR and lower-light shots. It allows the sensor to capture more light, significantly increasing light sensitivity and colour fidelity.

According to the Samsung release, “The new ISOCELL Plus delivers higher colour fidelity along with up to a 15% enhancement in light sensitivity. The technology also enables image sensors to use 0.8µm and smaller-sized pixels. Samsung says there is no loss in performance. It is an optimal solution for developing super-resolution cameras with over 20 megapixels.”

This is interesting. The trend has been to larger 1.4µm pixels. But these induce noise that must be removed during post-processing. Smaller pixels don’t suffer that and allow more MP in the same sized sensor.

The fingerprint button doubling as a heart rate and a V02 sensor is below the lenses. Face recognition has been beefed up with an extra sensor in the top bezel.

RAM/Storage is a given at 8GB and up to 512GB (although that may be the Chinese version). At at worst we will get 6/256GB. MicroSD storage and OTG to 2TB is standard.

But this will use Samsungs’s new 64-layer VNAND acknowledged as the fastest in the industry. This has a smaller footprint and may be stacked onto the 10nm Exynos 9810 or Qualcomm 845 processor to save space. These are super chips scoring single-core and multi-core scores of 2737 and 9046. This puts them well ahead of any current competitors products.

Battery size appears to be 4,000mAh. Super-fast charging could see the phone go from 0-100% in an hour or so. Fast Qi charging is a feature. Expected battery life is 25 hours video playback.

A new DeX device too

There may be a pre-order incentive of Samsung’s new Dex Pad  (GadgetGuy has one for review) that has HDMI, 2 x USB and USB-C passthrough. It is in a new desk format to allow you to use the screen as a touchpad. Or an extra screen.

Many of the new features here will find their way into the S10 series next year.

The Note series is unique for its S Pen. As a Note 8 user and journalist I can say that the S Pen is extraordinarily useful to me. The ability to scribble words anywhere, anytime is amazing.

If you don’t need an S Pen, then the equally impressive Galaxy S9+ is for you.