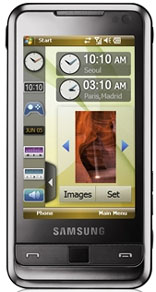 Many people may not realise just how big Samsung is when it comes to making mobiles – it’s the second biggest mobile company in the world after Nokia, and it holds that place here in Australia too. But the news that new kid on the block Apple has skyrocketed to the number threes spot (in terms of revenue) obviously spooked the top two, and a quick look at the Omnia (aka the i900) will tell you that this looks like Samsung’s answer to the Apple iPhone. At a glance they appear identical – but does Samsung’s ‘have-it-all’ smartphone have what it takes under the hood?

Samsung describes this as the ‘all in one’ device, and straight from the box it’s packed with features. The 5.0 megapixel camera is top-of-the-range amongst camera phones. The Microsoft Windows Mobile operating system means programs are in the same vein as your PC – Outlook email, Word, Excel, Powerpoint, OneNote. Business users will be comforted to have a mobile which thinks it’s a little PC. And of course it’s still a phone, and a second camera mounted on the face also offers clear video calls.

There are also neat little extras like an RSS reader and a player for your podcasts, the ability to use the screen like a digital frame, and a TV-out capability. Built-in accelerometers will automatically detect whether you’re viewing in landscape or portrait.

The Omnia also connects with DLNA (Digital Living Network Alliance), which allows you to stream pictures, music and video around your home network to compatible DLNA TVs etc. It’s early days for DLNA and at the moment the feature relies on operator support, but it’s a big drawcard if you’re into digital networking at home – and of course if you have all the compatible equipment.

The full touchscreen is lush and bright with plenty of room to move. It’s surprising then that it’s so difficult to use. The simplest task like tapping out an SMS or entering a phone number are cumbersome and tricky using the stylus, near impossible using a finger tip. Using a ‘flick’ gesture to navigate between menus gives a frustratingly slow response and will often see you accidentally clicking on an icon you were trying to avoid.

Web browsing is a must-have for a phone of this calibre, and Samsung are so enthusiastic they’ve offer two browsers – Opera and Internet Explorer, both of which are simply usable. The Windows Mobile connections manager is a nightmare though, so if you have to set up your own mobile data connection… good luck.

It’s got built in GPS, and Google Maps is a treat.

In this price range, the Omnia’s main rivals are the iPhone, the great LG Viewty, and even the BlackBerry Bold – all of which are superior in their own ways. If it’s email and office functionality you desire, the BlackBerry Bold is vastly superior and far easier to use. If you want the full touch screen, flashy looks and excellent camera, the LG Viewty is the better bet. And if you tend away from the business uses like email and Microsoft Office, you’d be better off with the iPhone.

Samsung really has got it all in this device – programs, camera, GPS, home networking – but what’s the point if it’s just so hard to use? If you really need all the office programs with push email and the like, I’d strongly advise you to take the Omnia for a solid test drive before buying – you may find that the tricky interface will steer you away from using the phone’s wealth of features.