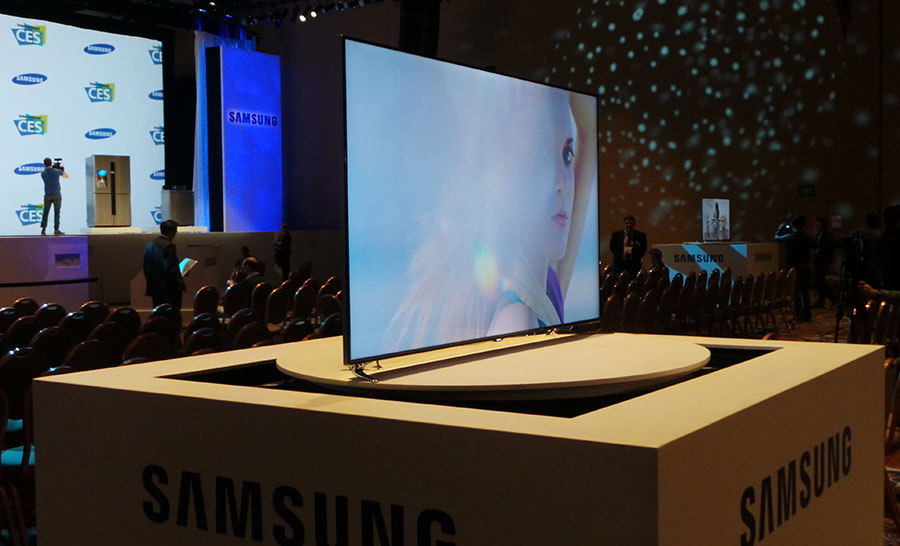 Lots of TV news today, and while we checked out LG in the morning, Samsung stole the afternoon, showcasing some new tech for the international press.

Launched today and likely arriving in Australian stores from March, Samsung’s F8000 is the new Full HD TV to beat, sporting much of the smarts that made the 2012 generation of tellies so good, but updating some of these aspects considerably to make the new model just that much better.

This model features a brighter panel, LED backlighting, more vibrant colours, and is the first Smart LED TV to feature a quad-core processor, similar to the technology found inside the Galaxy S3 and Galaxy Camera.

Multiple sizes will be available for this model, ranging from 46 inches all the way up to 75 inches, likely replacing the Series 9 edition of the 2012 TV with that 75 inch model.

Samsung isn’t forgetting about plasma with this announcement, adding a special algorithm designed to offer better blacks than LED TVs, with elements of its designed crafted from a single piece of metal.

OLED is also making an appearance from Samsung, though we didn’t see it at the press conference today.

Released as the F9500 this year, Samsung’s first readily available TV running on Organic Light Emitting Diodes should provide strong blacks, whites, and colours across the board, while also adding a feature we haven’t seen on a TV prior.

Samsung makes a special pair of 3D glasses for this purpose, which comes with an audio headset on the frame, allowing you to watch something on the same screen and at the same time as someone else next to you, who could be watching something completely different.

We’ve trialled Multi-View in action, and it’s very impressive and works at all angles, but it’s worth pointing out that this can only work on OLED TVs, thanks to the technology used in this display type.

The TVs themselves weren’t the only improvements Samsung was talking up, with a brand new and completely designed Smart Hub interface, which will make it easier for customers to find movies, TV shows, and recommendations for what they want to watch.

Five panels are available in the new interface, supporting “On TV” which shows what’s currently on and personalised suggestions, the rather obvious “Movies & TV Shows,” an apps selection screen, videos selected by your friends on social networks, and a channel specifically for looking at photos, video, and music shared across your devices.

Another feature certainly has our attention, with T-Commerce connectiing with TV shows to help you find things to buy in the television shows you like watching.

Over the next few days, we’re hoping to give all of this tech a good run through when we check it out at the Samsung stand at CES, so stay tuned for a hands-on!

Valens Quinn traveled to CES as a guest of Samsung Electronics Australia.