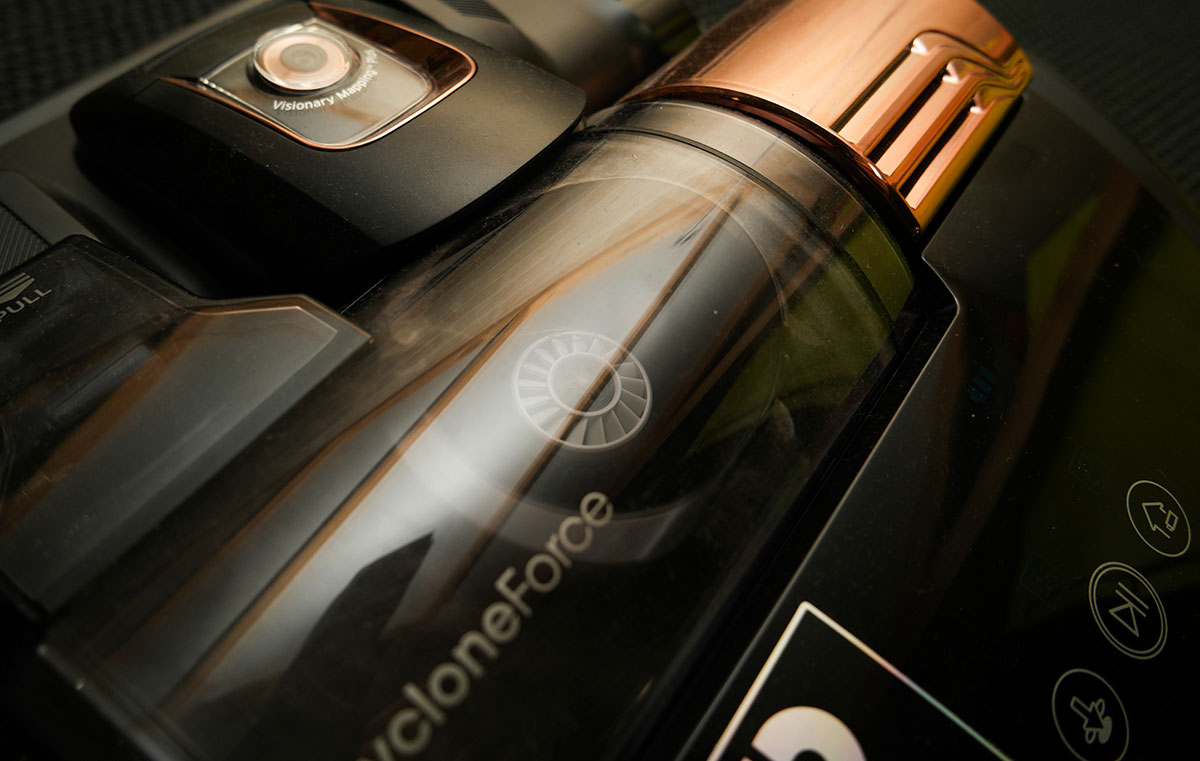 The home of the future will come with robot butlers and maids and chefs and cleaners, but until that happens, you’ll have to settle for a robot vacuum. Is this the future now, or just some cheap gimmick?

Robotic vacuums aren’t exactly anything new, but they are changing, with the evolution now more about what they can do to suck things up as opposed to merely sweeping them to the side.

Samsung’s latest take on the area is in the PowerBot VR9200, an update to its robotic vacuum model that features a digital inverter motor for the vacuum technology to increase the suction amount, making this robotic vacuum more like a vacuum and less like another sweeper.

Aside for that little motor, you’ll find support for wireless with an app that the vacuum will talk to on both iOS and Android, sensors to pick up on obstacles and drops to avoid any certain disaster, and a digital camera sitting up top to map out floorpans, which will allow the robotic vacuum cleaner to make its way around your home.

A battery can be found in the unit, good for a max of 160 minutes, though that is also dependent on how high the suction is set to, of course.

Setting the PowerBot up, you don’t have much that you need to do, setting up a small slimline base that appears to rely on an infrared sensor to guide the PowerBot to its home later on.

To start, though, simply dock the PowerBot vacuum in the unit and let it charge up.

It shouldn’t take too long, and we found our review unit had a decent amount of battery life to start with, so we just started pressing buttons.

You’ll find the remote is fairly accomodating, and we’d be surprised if someone didn’t get how to use it, as the icons are all pretty self explanatory, as are the words under the buttons. There are three levels of suction indicated through icons, and a directional pad with spot clean targeting, but we’ll get to that shortly.

For now, just hit play — the centre button — and watch the vacuum do its thing. Alternatively, you can press the play button on the vacuum itself, handy for those of us who tend to lose remotes all too easily.

Watching the PowerBot vacuum work, you can’t help but feel you’re watching an old animal try to make his way out into the world. He knows he’s not the same as he used to be, so he works his way across the world in steps, and turns, and steps, and turns.

For five minutes, I wanted to the animal— err, PowerBot to just sweep across the middle of the floor where I had intentionally dropped crumbs and dust.

I watched with anticipation to see if the path being tracked would put the vacuum in line with my intentional dust, and yet wasn’t surprised when the unit tracked left and right, bumping into chairs before eventually wedging itself under a piece of furniture.

“Beep, beep, beep,” it cried, realising it couldn’t go any further, and it did this until I came over and picked it up, telling it that it would be ok, before hitting play and letting it go on its merry way, cleaning again.

That’s the first thing you learn about PowerBot, because while it does its own thing in the background, the mapping doesn’t quite make sense to a human.

We — as humans and operators of the vacuum — want it to clean everything we can see, but it — as a robot with a camera up top and an algorithm designed to put everything together working alongside distance sensors on its body — is doing it in its own way.

Provided you let it do its thing, the Samsung PowerBot will get to it, eventually, even if it doesn’t make a lot of sense to you, and operating as a vacuum, PowerBot actually does do a commendable job cleaning the dust and dirt and flecks of rice cracker you’ve intentionally left on the carpet.

Three modes are available, and you’ll find even the lowest power of these — quiet — can pick up quite a few particles, from the errant here to the crumb baked goods that shouldn’t be lying on the ground.

We’re not going to say that the quiet mode is actually quiet, because it makes more of a high pitched whine if you’re in the same room with it, but it’s nowhere near as loud as a high pitched whirring sucking sound like other vacuums, and since the PowerBot will do its own thing, eventually it will make its way to another room and not bother you.

Occasionally you’ll here a thump as it bumps into something, and that will give you a slight giggle, but other times, it’s quite interesting to watch the PowerBot miss things as its obstacle sensor kicks in and does the math ahead of that “thump” noise.

You can also set up a virtual guard to create a sort of boundary line to stop the PowerBot from going into rooms you don’t want it to. This comes in the box, and relies on similar technology to what is in the base station, but it does the opposite, stopping the vacuum.

It’s a useful inclusion, though we’d have preferred a battery being built into the unit rather than needing two D batteries, clunkers that are not only a little harder to find but fairly costly.

Samsung is one of the kings of mobile batteries, so it’s surprising that the company has opted for D batteries instead of something rechargeable with a microUSB charge port.