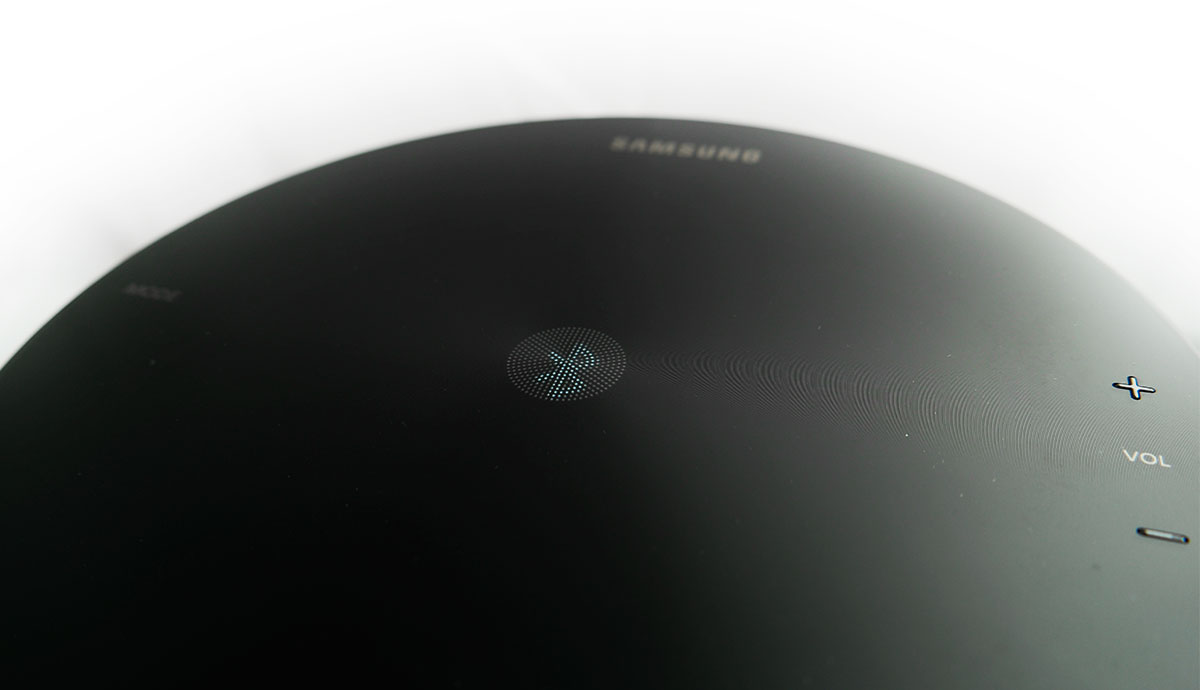 The idea of sound everywhere in the home is one that makes us happy, but sometimes you just want a speaker to send music everywhere in one room. Fortunately, Samsung is stepping up to the task with the omnidirectional R5, and it’s multiroom too.

The idea of sound everywhere is one that comes with many meanings. In most homes, it means individuals in various parts of the home listening to music through earphones, headphones and small speakers individually, while others have a sound system in the living room that they can all dance to.

But there’s a different way one can listen to sound everywhere, and it comes from two solutions: speakers that push the sound out to as much of the room as possible, and speakers set up all over the home that can be synchronised to talk to each other.

The latter if the very definition of multiroom sound, but 360 degree sound is another interpretation of it, and while there are products that have each, few have both inside the one package.

Samsung is giving that concept a good go in its R series speakers, rebuilding its sound and engineering team with some talent that used to be at Harman Kardon, with the outcome being a speaker that challenges your ears with a dose of audio everywhere times two.

It needs to be said that this series of speakers is Samsung’s second attempt at multiroom audio, and even from first glance, it is a much better follow-up to last year’s M series, which offered decent sound, but suffered from a slightly clumsy design and a woeful setup process that almost had us tearing what little hair we have left out.

Fortunately, setup is far easier, with an app and network joining process that isn’t quite as simple as what Sonos offers, but also isn’t far off.

Connecting to the R5, we’ll be taking things through Samsung’s Multiroom app, which relies on the wireless networking where ever you are. You’ll need WiFi to get this speaker to work over multiroom, as there is no Ethernet port.

There are other ways to talk to the R5 speaker — indeed, all of Samsung’s R-series speakers — with Bluetooth offered as well as a TV connection from compatible TVs, made by Samsung, of course — but we’re sticking with the app because of one basic reason: the R series Samsung speakers are meant to have a little more control with the app, from controlling various services to connecting up multiple Samsung speakers.

That should make the Samsung R5 more like a proper multiroom system similar to what Sonos has achieved on its platform, and we’re even looking forward to friends and family sitting on the same network and being able to control the sound with their devices, seeing the queue.

For now, we have to set up the speaker which fortunately isn’t hard. While the previous version struggled to find a wireless network and stay on it, Samsung appears to have fixed the problems in this iteration of speakers, with an app that merely looks for the lone speaker calling out for some attention and pairing it to the same network your phone or tablet is using, entering the password when it is requested.

Yes, you’ll need a phone or tablet if you want to pair the R5 to your network, but given that this is a speaker made for playing audio from a phone or tablet, this shouldn’t come as much of a surprise.

So that clears up the act of setting the speaker up, but design has also been improved, too, with less of a sloped speaker and more something that would fit in pretty much anywhere you can fit something tall, dark, and handsome.

In fact “tall, dark, and handsome” pretty much sums up the design of the R5, because it offers that in a package designed to push out the sound, and lots of it.

Under the cover of darkness — the grill, that is — Samsung has equipped a speaker relying on one 25mm tweeter and one 125mm woofer to fire sound in every direction, making it a 360 degree speaker. That’s 360 degrees around and also 360 degrees vertical, which you might want to translate into a 720 degree speaker, but let’s just call it 360 for ease of use.

Dealing with the bass, though, is a little more complicated, because bass needs to spread out and tends to want to rise up, so to deal with that, the woofer fires its bass at a small piece of plastic called an acoustic lens which shapes the sound to leave the bottom in each direction.

That gives you that slightly odd shape at the bottom just below the fuzzy grill, and this provides balanced audio in every direction.

That’s the theory, anyway, so let’s put it to the test and find out if Samsung’s R5 is more than just another omnidirectional speaker (because that’s not new) and is rather something worth having in your home.