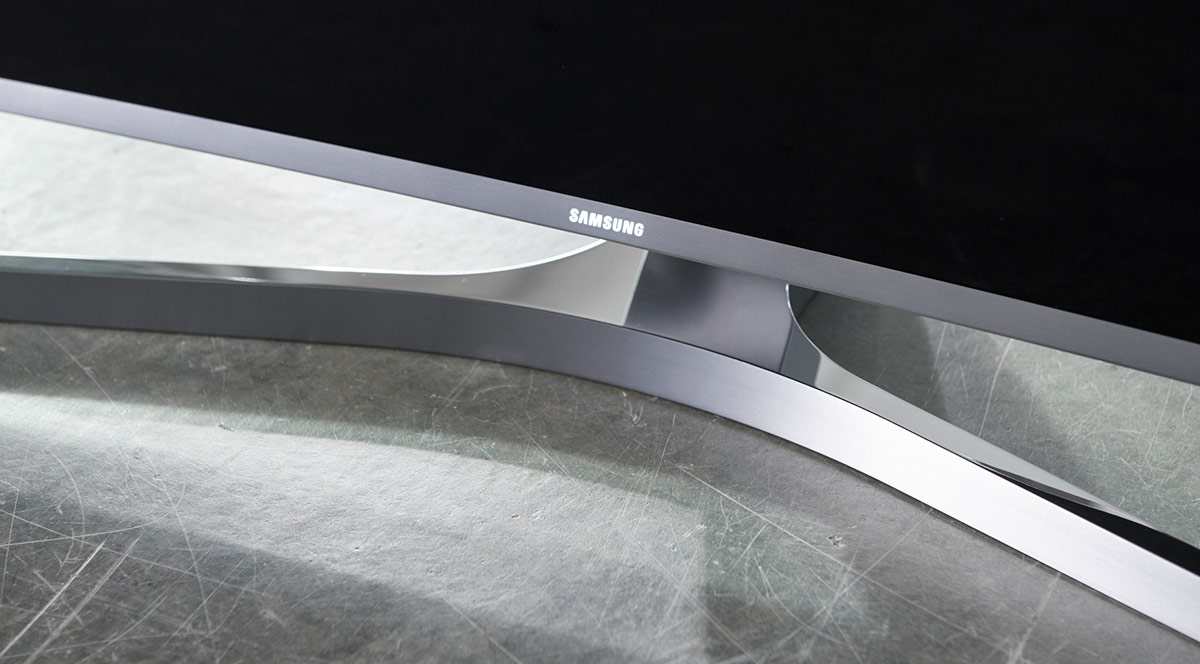 Right at the top of the Samsung’s several 2015 TV model series is the 9500 series. Consisting of three models, these are premium-priced showcases for all the best Samsung now has on offer.

Although a close examination of either the 88 inch or the 78 inch model would have been fun, Samsung wisely chose to provide us for review with the relatively modest 65 inch model: the UA65JS9500W. At $9,999 this one is rather more affordable than the $24,999 or $19,999 of the larger ones.

The nominally 65 inch screen measures a touch smaller at precisely 164cm on the diagonal. UHD means, of course, a resolution of 3,840 pixels across by 2,160 vertically. The curve of the screen is mild. Samsung specifies it as ‘4200R’, which means that it has the same curvature as a circle with a 4.2 metre radius. Or, to put it another way, if you sit 4.2 metres away from it you will be at its focal point.

The panel is labelled ‘SUHD’, which marks some new and improved display features, including ‘nanocrystal technology’, which provides a wider colour gamut or range than previous LCD displays, and ‘Precision Black Pro and Peak Illuminator’, which increases contrast between blacks and whites across the screen. Rather than being edge-lit, the panel has a grid of LED backlights which provide localised brightness control.

Samsung describes the panel as having a ‘Grande Chamfer’ design. This is marked by the thin, brushed aluminium frame, only 13mm wide – on all four sides, including the bottom – so that the TV looks like an elegantly framed picture. As the name implies, the bezel’s face is chamfered so that the inner edge is close to the glass of the screen while the outer edge stands out more.

The frame is only 19mm thick at the edge, but within a couple of centimetres the panel is 40mm thick. It swells towards the centre to reach around 60mm deep as best as I could measure.

The rear is finished in black and is nicely smooth, marked only by six indents: four for the VESA-conforming bolt holes for wall mounting, one for the power cable and one for the signal cable. If bench mounted in such a way that the rear can be seen, this TV still looks quite attractive.

The supplied stand is boomerang shaped, also brushed aluminium, and just as elegant. It holds the bottom of the TV about 80mm above the bench. A tiny pop-up camera is integrated into the top of the TV frame.

Those reading carefully would have noticed reference in the preceding paragraph to ‘the signal cable’. That’s because rather than having lots of connections on the panel itself, they’re all offloaded, along with the electronic smarts and the TV tuner, to an external unit. This is housed in a nice brushed aluminium box and a two metre proprietary cable joins it to the TV panel. It is powered through this cable from the TV.

It has four HDMI inputs, three USB ones (one of them USB 3.0), and a propriety socket for an adaptor loom that supports composite and component video and analogue audio inputs.

This loom also has analogue audio output to connect to an audio system, while an optical digital audio output is built into the main body of the connection unit. It also has a network socket, if you want to be wired rather than using the built in 802.11ac standard WiFi connectivity.

It now uses a Linux-based operating system called Tizen. This is an open-source OS (meaning amongst other things that anyone can write apps for it) and it ought to be relatively easy for those who do these things to port across existing apps from other Linux-based systems. This has been a trend amongst major TV makers, departing their proprietary ‘Smart TV’ systems for modern interfaces, and is a welcome one, increasing usability and performance.

Also increasing usability and performance is an Octa-Core processor to handle all the computing activities.

Interacting with the smart features is assisted by a pointer-style remote control. This controls an on-screen dot which moves in response to physical movements of the remote. This type of thing is by far the most effective type of remote for the modern smart TV, and Samsung’s works well.

All you need do is lightly touch the ‘pointer’ button on the remote to bring up the selection icon. Having had experience with another brand’s version, it took me about a minute to master this one. It works by radio connection (aside from the power key), so no line of sight is required.

One downside, though, is that no old-fashioned IR remote is provided, so if you prefer old-school TV interactions you’ll need to pay extra (about $40 on line from various vendors).

The TV is described as ‘3D ready’, which means that it will do 3D if you pay extra for 3D eyewear.

After I’d plugged everything in the TV installed quickly and smoothly, guided by a wizard.

Samsung has outdone itself with this TV when it comes to picture quality. It produced the best picture I’ve yet seen. It was good even on decent standard definition free to air digital TV and DVDs.

With Blu-ray it was magnificent. But in both cases, that was once a few settings adjustments had been made. For some reason it defaulted to ‘Dynamic’ as the picture mode. ‘Standard’ was far better, especially with the ‘Sharpness’ control zeroed out. The Auto Motion Plus motion smoothing system was a little over powered, leaving the picture looking a bit too glossy. I preferred the picture with this switched off.

And with those few things adjusted I loved it. In fact, it was the best TV picture I’ve yet seen.