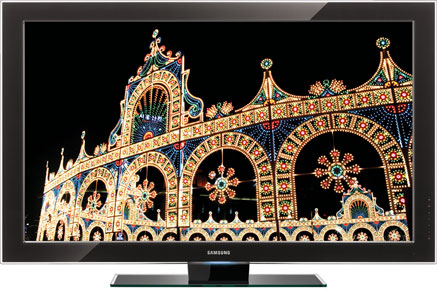 The weakness of LCD TVs in comparison to plasma TVs has been their black levels. Put your feet up in the evening, turn off the room lights for an involving movie, and whenever the picture goes dark, your LCD will glow. Irritatingly.

In recent years, some brands – including Samsung, which has done as well as or better than its rivals – have included clever features which reduce the brightness of the backlight behind the LCD panel when the picture goes dark. This still had limitations, such as when the picture was bright in one part of the screen, but dark elsewhere. Turning down the backlight risked eliminating the impact of the bright part.

Well, the Samsung LA46A950 LCD TV is the first of a new breed of LCD TVs that have eliminated this problem.

The trick is to use not one but many backlights. That’s what Samsung has done with this TV. Behind the LCD panel are hundreds of tiny LED lights, and these can be controlled so that areas of the screen can be made bright or dark independently of other areas.

Imagine, a dark room is shown in a movie. In the corner of the screen, a door is flung open, glowing brightly against the gloom. With this TV, there need be no compromise. In the dark areas of the screen the brightness can remain low, while where the door has opened the backlights can burn brightly.

This is a premium TV for Samsung (it costs over $1,500 more than the next model down in the same size), so it gets Samsung’s full premium feature-set, including USB card reader, PIP, built-in HD tuner and four HDMI inputs.

And it adds one rare extra: a Digital Living Network Alliance (DLNA) network port. Plug it into your home network and with suitable server software on your computer (Windows Media Player 11 will do) you can playback photos, videos and music stored within it using the TV.

The TV can also display news and weather snippets which it captures from the internet, and has some built-in art works, kiddie entertainments, exercise instructions and recipes (we’re keen to see the kitchen that can accommodate a 117 cm/46 inch screen).

But let’s get back to movie watching. I gave it the hard test: 10 pm, all the lights out, Blu-ray movie on. A scene in the movie faded out and there was a brief moment of blackness during the transition to the next scene. The light from the Samsung TV’s screen also faded to complete blackness. The screen area was indistinguishable from the bezel. It was truly dark.

Then there was the real test, easily done with one of the built-in photographs. This has fireworks shown against a dark background. In my dark room, the black background really was black. But that could be a trick of the eyes because of the bright areas on screen, so I used a light-proof rug to mask off the bright areas of the screen, and the black parts remained black. Perfectly black. Brilliant!

The DLNA stuff worked well (that’s the whole point of DLNA certification), much as it does with high-end home theatre receivers.

As for all other aspects of the TV’s operation, they worked just like Samsung’s high-end TVs always do: very well. Blu-ray, playing at 1080p24, was the best, of course, but HDTV often looked more like a window into the world of the action, than a mere representation of it on a screen.

The Samsung LA46A950 LCD TV has brought the LCD TV, finally, into full competition with the very best of plasma TVs. This truly is a state-of-the-art television.