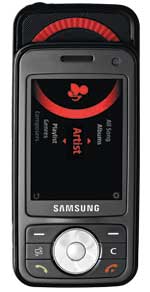 Much like Sony’s Walkman series of phones, the Samsung i450 takes music seriously. Featuring a very cool music interface, an audio system by Bang & Olufsen, FM radio tuning and a touch wheel control system, the i450 really is prepared to take the mantle of iPod replacement.

It also happens to be an affordable 3G phone, capable of HSDPA speeds and a very long battery life. It has a powerful media player with support for Flash and Real Media playback, a suite of simple productivity tools (such as a calendar, organiser, calculator and basic video editor) and several other applications besides.

Samsung clearly took some of its cues from the Nokia N95 when it designed the i450. The i450 is a dual-slide phone (when you slide it up it reveals the keypad; slide it down to reveal the speaker and trackpad). Sliding it down also automatically flips it to landscape mode and fires up the music player.

Much as with a standalone MP3 player, the music player allows you to select and organise tracks based on data embedded in those tracks. So you can sort by album or artist, genre or year. You can also sort tracks by how often you’ve played them, or how recently you uploaded them. It’s very nifty, and easy to control with the trackpad, though mastering the latter takes a little getting used to.

The trackpad appears as a red semicircle embedded in the speakers. Running a finger along the length of it scrolls through tracks and options, much like the clickwheel on an iPod. Double tapping it selects the option.

All in all, we’re quite taken with the i450 as a music player. Not only does it produce quality sound and have a cool interface, but Samsung also get the little things right, like having an external slot for the memory card so you don’t have to take the back plate off to switch to new music; or having an integral 3.5 mm headphone jack and readily accessible volume buttons; or having the option to download tracks directly to the phone from an online music store of your choice.

The i450’s phone elements are somewhat less impressive than its music player. It covers all your usual 3G bases, of course: MMS, SMS, email, web browsing, voice and video talk. But the interface is neither compelling nor intuitive, and the number keys difficult to use with any fluency.

The interface for the 2 megapixel camera was slow to load and slow to actually take pictures, but when it did it got them pretty much right, producing higher quality pictures than many 3.2 megapixel cameras. The flash worked exactly as it should, automatically detecting light levels and producing images that are not over saturated.

Although not quite as good a media player as, say, Sony Ericsson’s W890i, the Samsung i450 is a still a phone that gets a lot of things right. Its music player is fast, intuitive and produces quality audio.