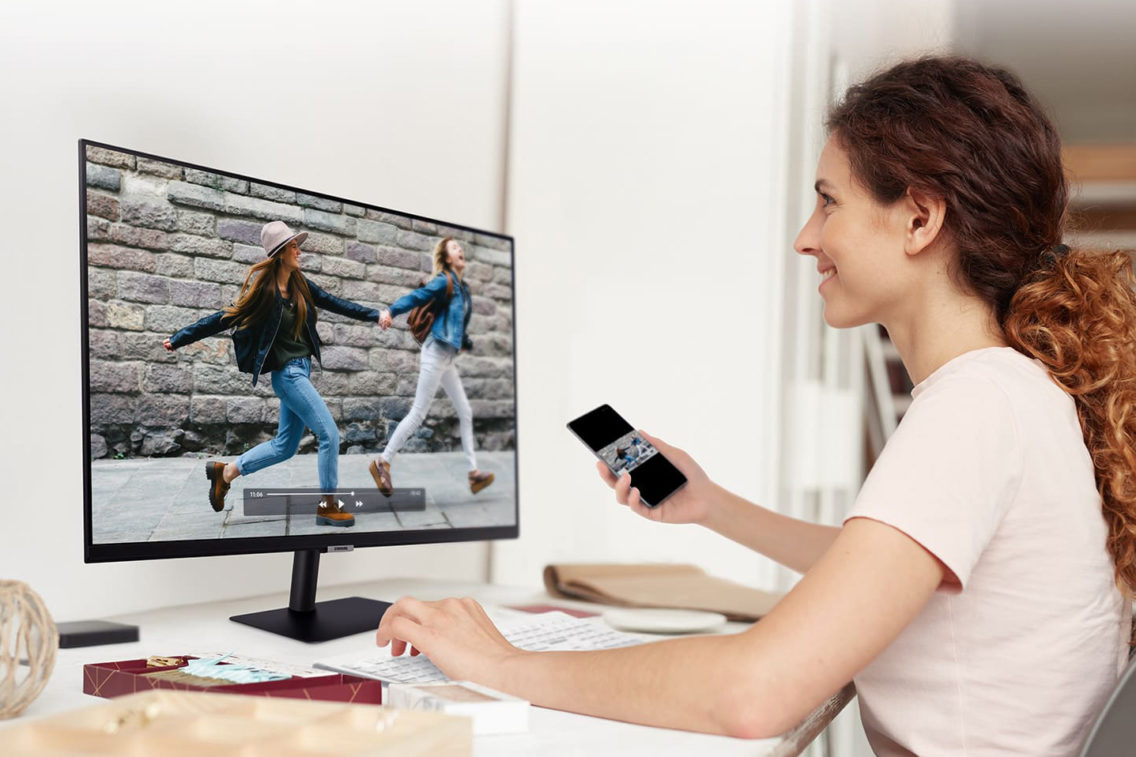 The new range of Samsung Smart Monitors is a monitor with Samsung Tizen TV OS smarts inside. It can be a digital TV, PC/Mac monitor, Samsung DeX station, support Apple AirPlay, TapView (like NFC), and even access Microsoft 365 Cloud or remote PC access. It even comes with a TV-like remote control replete with Netflix and Amazon Prime buttons.

This review is more about what a Samsung Smart Monitor does than any specific model – although we are testing using the 27” M5 Model LS27AM501NEXXY.

Setup – a bit more than plug and play

It is a Samsung TV without a Free-to-Air tuner, so you need to go through setup. That involves using the remote control (never lose it or you are screwed) to enter Wi-Fi login/password, Samsung Account details, and then to agree to a raft of Samsung Privacy agreements so it can feed you advertising, know your viewing habits, and voice match for Bixby. I suggest you say yes to all. If you can’t trust Samsung, then what can you trust?

Later go to the Privacy settings and take the time to read them. There you can disable any that you disagree with. Mind you; then you may not be able to access certain services like Samsung TV Plus or its app store – got you either way. But most TV OS, including Google Android and WebOS, are just as inquisitive.

Microsoft 365 cloud apps – Fail – test first if you need this

One of the strongest selling features of Samsung Smart Monitors is accessing Microsoft (Office) 365 Web Versions via a browser. It is also potentially the most frustrating experience of your productive life. The lag using Microsoft 365 (Word, Excel, Outlook etc.) can be so long as to be unusable.

On NBN 100/40Mbps (I was the only current user, so I had total bandwidth), moving the cursor around in the cloud versions of Excel and Word was very slow. The navigation sidebars (Word only – did not even show in Excel) had a few seconds lag.

So, I went back and used the Samsung Internet Brower and logged into Microsoft 365. The result was the same as going via the Smart Monitor Connect menu – a two-to-five second lags for change cells in Excel, no right navigation bar, and a very clunky cursor. The text was also quite grainy.

There are two possible causes. First, the Samsung Microsoft 365 app needs work. But equally likely is that the Wi-Fi 5 AC dual-band is not up to the task. We could not measure the monitor’s Wi-Fi signal strength, but our Samsung Galaxy S21 Ultra was 1200Mbps, so we moved it to 2 metres from the router – with the same result.

I suggest that if this is your prime use, make sure that you try before you buy.

I doubt many will use this feature, but it allows access to another Windows PC (RDP) or Mac (VNC) over the internet by knowing the remote IP address, PC name, user name and profile. We tested this, and it was similarly slow.

We can’t blame the NBN connection as I ran several speed tests, and we had total bandwidth and 9ms ping times.

If you have a DeX compatible Samsung smartphone or tablet, you can connect via a DeX USB-C to HDMI cable (Wi-Fi connection also supported). It brings a kind of Android Desktop up – you can read more here. Interestingly it was more responsive than Microsoft 365. We also have an older DeX Station that connects a wired cable keyboard and mouse – convenient.

Samsung claims HDR10, and it may well reach that for TV use – more likely, it downscales to the panel’s abilities.  In Windows 10, using a 4K HP Spectre via USB-C to HDMI 4K cable, it only sees it as an SDR (standard dynamic range).

Colour accuracy is acceptable for office use. Test show about 95% sRGB. Professional users will understand that it is about 70% DCI-P3 – not for photo or video use.

The 1.5m, 240V power cable plugs directly into the monitor.

It supports an external USB-A keyboard and mouse or Logitech Unifying receiver, but the mouse only works in limited apps – internet browser, Microsoft 365 and remote access.

All have Wi-Fi 5 AC dual-band and Bluetooth 4.2. You can connect a BT keyboard, mouse or gamepad (not tested). The mouse availability issues also apply.

Out of the box, it has about 2.83GB of free memory. Certain non-core apps are installable on a USB 2.0 (FAT, exFAT, NTFS) flash drive.

It is not so much a failure as the single speaker lacks volume, fidelity and distorts close to the maximum volume of 72dB. It is a mid-signature more for a clear voice.

You can ‘Sound Mirror’ over BT with an attached PC or attach a soundbar over HDMI. If you connect a soundbar, you only need a low-cost one as it only processes 2.0 sound.

It has a 21:9 shrink feature that shows more screen width in a letterbox format. As it lacks higher or adaptive frame rates and does not have HDMI 2.1, it is not suitable for connection to a new PlayStation or Xbox.

It is all very intuitive and presents a low learning curve. Part of the interface is Samsung TV Plus – advertisement-supported TV, and access to Samsung Tizen apps in its app store. It has EPG and guides too.

It has Bixby for voice commands, and that is fine for finding programs on Samsung TV Plus.

TapView acts like NFC with compatible Samsung smartphones allowing instant Wi-Fi connection (if they are both on the same network).

I am a little torn. I love the Samsung Smart Monitors concept, especially Microsoft 365 Cloud, but it failed, at least during the tests.

And it is not as unique as Samsung thinks. Most modern monitors have at least two inputs (HDMI and DP). You could easily plug in an NVIDIA Shield TV Pro (or most Android TV boxes), use a cable/BT keyboard/mouse, have full smart TV functionality, remote access to Microsoft 365/RDP, and Chromecast (no AirPlay 2, but you could use Chrome browser for that). DeX is a function of the Galaxy device – so it works on any monitor.

But an M5 in 27/32” for $399/499 is good value for what it can do, it has all the usual monitor settings, and I am sure that Samsung is working on the one fail now. Worth a try as theoretically, it could replace a small PC and with basic productivity tools.

We start with a pass mark of 8/10 as it is a competent monitor. Add to that Samsung Smarts, 3-year warranty, digital TV, Airplay, and more.

We subtract points for the Microsoft 365/RDP issues and that the keyboard and mouse only work in a browser window. But to be fair, these may have been environmental issues, so as long as you can test if it works for you, it is a strong selling point.

Samsung Smart Monitors – 27” M5
This is the monitor that can do a lot more but its use to you will depend on your expectations
Features
9
Value for money
9
Performance
8
Ease of use
8
Design
9
Positives
A monitor with Smarts that could reduice you need for a PC
Small footprint
Samsunbg quqality and 3-year warranty
Negatives
Mircosoft 365 and remote PC worked poorly during the test - if this is you need try before you buy
8.6