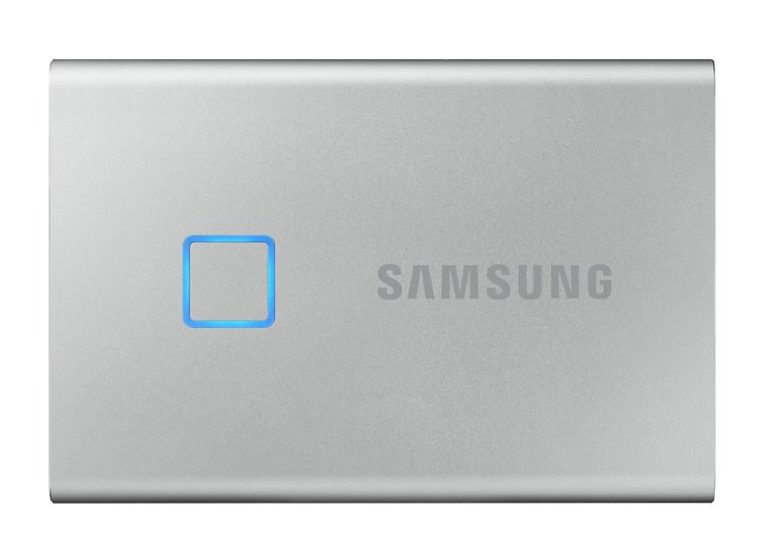 The Samsung T7 Touch does in one second what takes between six and ten times longer on a traditional external SATA6 USB interface SSD. But there is one catch – you need a USB-C 3.2 Gen 2 device to copy from or to.

So, our tests reflect that setup.

The Samsung T7 achieves 857/769MB/s using a Thunderbolt 3 port – that’s not far off the claimed speeds, and we expect the 500GB to perform a little slower than 1 or 2GB with larger caches.

But interestingly both ports had very similar large file transfer rates – within a few percent of each other indicating that there is a small cache buffering the flash storage. If you transfer a lot of large files, then you may need to look at competing products with larger caches.

Obviously, it works on Thunderbolt 3 (20Gbps) at close to Gen 2 speeds.

The Samsung T7 touch uses 3-bit 92L TLC V-NAND, and its cache is called TurboWrite Technology. This is not really DRAM cache, but a small and fixed portion of the TLC is treated as 1-bit SLC.

That cache, one full with larger files, does slow down the transfer rates. Most typcial users will not notice it.

The Samsung Portable SSD software for Windows, Mac or Android allows for firmware updates and setting security levels – off, password, or password and fingerprint. The data is AES 256-bit hardware encrypted.

We were unable to discover any other functionality like backup or restore. Samsung’s response was “You can select files such as photos and mp3s that you want to back up through the file manager on your device, and copy/paste them to the PSSD.”

We presume (not tested) that it also works with commercial back up software.

You can register up to four fingerprints.

Being solid-state, it can withstand drops up to 2 metres, but it is not IP rated waterproof.

If you lose your password or finger? you cannot reset the device – it is cactus.

Touch is only for security – it does not initiate a backup.

Use only the cables provided – other cables may not support USB-C 3.2 gen 2.

I have been using Samsung T devices for some time. They are all leading-edge (when released), and this uses the fastest USB-C interface.

But it also has an X5 Thunderbolt 3 version that is twice as fast and twice as expensive.

Then the T5 version is about as fast as the T7 using a Gen 1 interface. So, if that is the interface you have then bag a bargain.

Competition: SanDisk Extreme Pro has a larger cache. It does not have fingerprint security