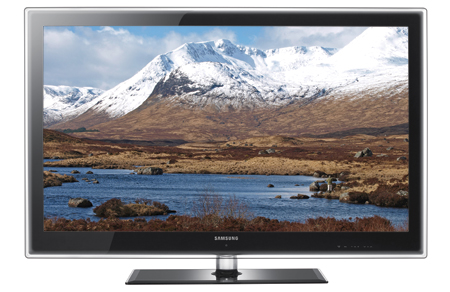 This review of the Samsung UA40B7100 LCD TV was as part of a collection of 5 reviews for the article Eco TVs – how green is your TV?. The 5 reviews have been gathered together in the article 5 eco TVs tried and tested.

The Samsung UA40B7100 LCD TV is quite a mixture. For the most part it is a high-end TV with high-end features, including a super slim panel measuring slightly under 30 mm thick and digital multimedia support via network or USB.

It is highly energy efficient – scoring 5 stars according to Samsung – and this seems to be due to the use of LED backlighting, and specific tuning designed to yield a big score under the rating scheme.

According to my measurements, it fits between the Toshiba Regza 40CV550A and Sony Bravia KDL-40WE5 as far as energy usage goes, both of which get 4.5 stars.

Under the rating scheme, the measurements are conducted with the TV in its initial out-of-the-box condition (pausing only to make any selections forced by the TV’s first start-up processes, and to switch off any ambient light sensor). This TV defaults to ‘Standard’ for the picture setting and this, oddly, had its backlight brightness set to only 5 out of 10. These are normally up around 7 or 8 by default.

Most TVs, like this one, also have a ‘Movie’ or ‘Cinema’ mode and these usually use less power than the default mode. But this TV was brighter in ‘Movie’ mode and used nearly 5 percent more power!

You can save more power by turning down the backlight further, or switching ‘Energy Saving’ to one of three settings: the biggest cuts power by about 25 percent. The ‘Auto’ setting made no particular difference.

Even though the backlight was only set to 5, the picture was up to Samsung’s normal high standards. I found the sharpness up a bit high, but otherwise the picture quality was brilliant, with excellent blacks. If you do find yourself with too much ambient light, it ‘s nice to know that you have plenty of reserve backlighting to compete, if you don’t mind surrendering some of the energy savings.

But I would also suggest you add an audio system. This TV was particularly tinny on the sound front.