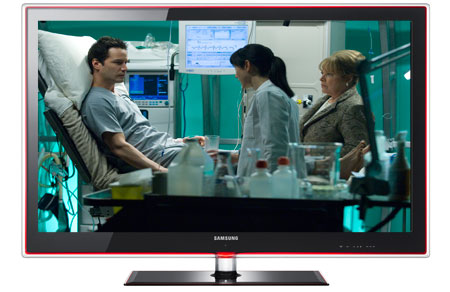 Not all LED LCD TVs are created equal. Backlit LED LCD televisions can make use of dynamic dimming of individual sectors of the LED grid to improve contrast, but at the cost of a thicker TV casing.

Edge-lit LED LCDs, such as Samsung’s 7 Series (we’ve reviewed the 117cm/46 inch here) can be 70 percent thinner, but lack some sophistication when it comes to managing image quality.

For performance perfectionists, then, the choice is obvious. Until, that is, the release of this TV, which demonstrates that edge-lit LED backlighting can produce impressive results.

The 7 Series (and the more expensive 8 Series, which integrates wireless networking) is an attempt by Samsung to create a TV that does much more than display video. Far from a ‘dumb panel’, this TV can connect to the Net via an Ethernet cable, and play content from a DLNA-equipped PC on your home network.

We would have preferred wireless to be built-in at this price – after all, if an $800 mobile phone can have Wi-Fi, why not a $4700 TV? Wireless networking can be added, however, via Samsung’s optional USB adaptor ($99), and install installing it will leave only one USB for other media.

The USB ports also allow you to connect a digital camera and view pictures using a slideshow application controlled by the remote. A universal memory card reader would have been even better, but it’s USB only for now.

When it comes to video, the edge-lit LED system keeps the TV barely three centimetres thick, and unlike other super-slim LED-type LCD televisions that couple with external media receivers, Samsung has managed to build the HD and analog tuners right into the chassis. While the 7 Series boosts the typical number of HDMI inputs to four, there’s only one component input.

Yes, HDMI is the future, but it’s still too early to ditch flexible support for older DVD players and game consoles. Of course this problem can be alleviated by using an AV receiver with the TV or purchasing a suitable adaptor cable.

Onboard audio is typical of TVs in this space: 10 watt speakers do the job, but won’t impress. Image quality is a different matter: 100Hz image interpolation, 24p sync for Blu-ray, and a virtually-infinite dynamic contrast ratio produce great results.

Software must be installed on your PC to allow the TV to find audio, video and picture files via the network. While the TV supports a wide range of video formats, the sheer number of subtle codec differences out there on the wild world web means video support can be hit and miss, unless you really know what you’re doing when it comes to encoding.

First, the video. Blacks are impressively deep, especially since this is an edge-lit LED panel. At this price point it’s reasonable to expect extremely good colour and contrast, and the 7 Series doesn’t disappoint.

Selecting various picture modes – dynamic, natural, movie, etc – will allow the viewer to find a colour and sharpness mix that suits them, and deeper fiddling with the menu system reveals a host of options for the tweakophile. As seems typical with Samsung displays, reds are particularly vivid, though some viewers may find very chromatically complex images a little flat.

Edge-lit vs backlit – is there a difference? Our comparison at time of review was with an LED backlit Sony TV costing $2,000 more. Yes, the more expensive TV had superior blacks and colour, but to the value of $2,000? Your answer will demonstrate your dedication to videophilia.

Unfortunately the extras in the TV – the photo viewer, kids games, recipes and other ephemera – suffer from a somewhat awkward interface. After using a PS3 to view photos, with its dedicated buttons for rotating shots, having to cycle through menus with a rubber-keyed remote feels like a step backwards.

Thin, elegant, and with a great picture. It’s a compelling equation, and if you ignore all the fiddly data stuff, the 7 Series is an excellent TV indeed. But the sheer number of menu options can be daunting, and if the TV has a fault it’s in trying to do too much too soon – TVs that are also the home’s data hub need more time in the kiln.

A clean, fast interface and a next-generation remote with a focus on viewing user-generated content such as photos and home video should take precedence over games that kids won’t play – no TV can compete with the mighty Wii, after all.

On the other hand, just want to watch it? Then Samsung is right – this really is a new species of TV.