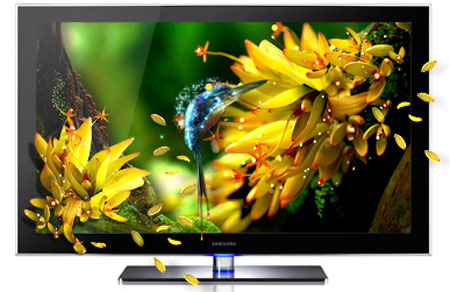 Next time you’re at a large consumer electronics retailer, find the higher quality Samsung TVs, walk around to their sides and have a close look. Or even a distant look, for there is nothing subtle about what you will see. These TVs are thin.
Not a little thinner than the old ones, but one third or less the thickness: a hair under 30 mm.

This is seriously impressive stuff. And it is with this feature, along with a host of high-end functions, that the Samsung UA46B8000 comes.

Those features? LED backlighting for one.

But I must be clear about this. When I wrote about a 950 series Samsung LED/LCD TV last year, I raved about the way the grid of LEDs could be used to brighten and darken different parts of the screen. But that was a 108 mm thick TV. This one uses LED backlighting for a different purpose: to allow the panel to be very slim. It does not have the same ability to control different sections of the screen.

Samsung has bumped up its ‘Motion Flow’ image-smoothing processing to 200 hertz. It has improved its USB multimedia performance by adding a second USB socket, one of which supports hard disks drives that don’t demand too much power, and by adding to the media formats supported so now it could play my test MPG, AVI and DiVX files, including full high definition ones. You also have DLNA (Digital Living Network Alliance) support so the unit can play multimedia from computers on the network you have it plugged into. Or you can use Samsung’s wireless LAN adaptor with one of the USB sockets ($99).

Before getting to the picture this TV produces, let me spare a few words for the user conveniences it offers. Obviously its main menu system is extremely rich, given the number of options and features provided. But there is a convenient ‘Tools’ menu which is somewhat context sensitive, generally including a list of ten or so things that are relevant to what’s on the screen.

One thing that pops up the list is an access point to any CEC devices connected via HDMI. In fact, if you’re watching TV you can switch to, say, Blu-ray by popping this up and selecting the device. That will switch the TV to the appropriate HDMI input and make it remotely turn on the Blu-ray player. Once that’s going you can use the play/stop/fast forward controls on the TV’s remote.

And since the TV’s remote works with radio waves rather than infrared, you don’t even need to point it. However the TV will still work with your universal remote control, since IR is used by the ‘pebble’ style simplified remote that also comes with the TV.

But what about the picture and sound? The sound is about as good as you can expect from a super thin TV: good enough for watching the news. You really need an external system to get sound worthy of the picture.

The picture was very good overall, especially after I’d switched off the ‘Motion Flow’ system. That did its job, keeping motion smooth. Even incredibly sharp 1080p material from Blu-ray didn’t faze it. But it gave a glossy look to the picture and showed a significant ‘heat haze’ around moving objects much of the time which was quite distracting.

The colour was excellent and the dynamic contrast processing quite good. But not as good as the 950 series, since the TV had to compromise across the whole of the screen, rather than optimise small areas. In addition, with a full black screen the black depths were rather mottled, as though the edge backlighting couldn’t be applied perfectly smoothly across the screen.

So this TV is a step forward in aesthetics, thanks to its marvellously slim lines, but doesn’t quite match the older 950 series for ultimate performance. Nonetheless it was a pleasure to use, and if not quite A+, the picture was certainly a good A-.