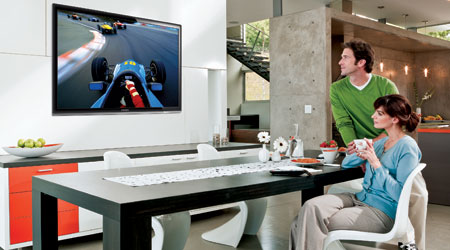 The hottest new home entertainment technology to appear since the introduction of Blu-ray has got to be 3D. Most of the major brands have their own systems on the verge of launch, but Samsung was the first to make it into Australian retail electronics stores.

For 3D to work properly you need not just a TV, but 3D source material. That can be live-action material captured with a two-camera rig of some sort, or computer animation. The latter is probably the most common at the moment in the cinemas, and so is likely to be the most common in the home as well.

The TV is one of Samsung’s gloriously slim models, measuring well under 30mm thick. It is so slim that while the USB and HDMI cables can plug directly into the unit, adaptor cables are provided for all the other inputs to allow small connection sockets to be used. It comes with a swivel desktop stand.

It is a full high definition TV of course, offering 1920 by 1080 pixels, and uses edge LEDs for backlighting. The screen is a very generous 140cm (55 inches) in the diagonal.

Quite aside from the whole 3D thing, the TV is packed with just about every feature you can think of. The screen has Samsung’s Motion Plus 200Hz motion interpolation system, its motion smoothing system. It has two USB sockets, and you can plug a hard disk drive into one of them, creating a PVR! With one of these in place (formatted by the TV to something incompatible with Windows) you can time shift live TV, or set up recordings for later playback.

The TV supports wireless networking, but only with the addition of a USB WiFi dongle. But the Blu-ray player has much the same networking facilities, including access to DLNA media on a home network and Internet TV, YouTube video and Picasa web albums, and has the convenience of having wireless networking built in.

It has a single HDMI output. Since current home theatre receivers generally won’t reliably handle 3D video (to be confident about this, you will need HDMI version 1.4 on your receiver, and this is only coming to market right now), two HDMI would be better.

At least one other maker we know of is introducing a two-HDMI player, with one output used to feed 3D video to the display, and the other for passing high definition audio to a home theatre receiver.

With Samsung’s player, you may therefore need to plug it directly into the 3D TV, and use optical digital audio or an analog connection to the receiver for the sound.

The shutter glasses look neat enough, though you won’t win any style prizes with them on your face. They have a little press button on the top (a quick press switches them on, holding it down for several seconds switches them off). The built-in rechargeable battery is charged by USB using the supplied cables. The USB sockets on the TV seemed to do the job nicely.

Let’s get right to the special stuff: 3D. To make this work, different images need to be presented to your left and right eyes. Samsung’s system works by employing liquid crystal ‘shutters’ in eyewear. These are synchronised with the left and right eye images flashing alternately up on the screen at 100 or more times per second. If all works well, your right eye will see only the picture intended for it, and likewise for the left eye.

This TV has two ways to deliver 3D. One way is to apply some pretty nifty processes to produce a 3D effect with 2D material, which I will return to later.

The most important way is with authentic 3D material, delivered on Blu-ray (and ultimately broadcast). I didn’t have very much material for this at all: specifically, all Samsung could provide was a little over ten minutes of the 3D version of Monsters vs Aliens on shop demo Blu-ray disc.

In general, the effect was very impressive. There was a clear sense of foreground objects hovering in front of the background ones. At times it was positively eerie. Even when I paused a scene, the Blu-ray player and the TV continued to alternate the left eye and right eye images, producing a static 3D effect.

Perhaps surprisingly, the effect was better with slower motion and lower contrast scenes. The first scene on the disc involved a battle with flying ordinance and aircraft and wreckage. I thought that these fast moving objects – their onscreen trajectories clearly optimised for dramatic 3D effect – were often too fast for the eye to resolve the 3D information sufficiently well.

The next scene took place in front of a bright blue sky, with the foreground objects contrasting sharply against this background. But this tended to allow some ghosting to be visible. This might be called ‘crosstalk’ or ‘leakage’ of the information from one eye to the other, and was more apparent if I closed one eye.

This had the effect of reducing the sense of depth significantly, and also tended to smear and obscure detail. For this scene I preferred to switch the TV to 2D mode for the razor sharp detail this provided.

However the next scene – a quite long one – was inside an enclosed space and there weren’t the extremes of contrast. From time to time as massed characters marched in formation, this delivered a thrillingly deep sense of 3D space.

The TV’s own 2D to 3D processing was variable. At times it was so startlingly good that it seemed to be truly replicating the effect of a full 3D capture at the time of filming. At other times there was virtually no effect. And at still other times, it was confusing to the eye.

Generally there was more effect with Blu-ray than DVD, and with DVD than much broadcast TV. The sharper the image, the more 3D. The TV seemed to select sharp objects near the centre of the screen as foreground objects.

Because of the variability, I couldn’t image anyone watching in this mode for a lengthy period, impressive as it was at times.

Of course, most of what we watch isn’t in 3D mode at all, but in regular 2D. With all of this the TV performed with Samsung’s customary high LCD quality.

Black levels were generally very good, although darker scenes with bright areas on the picture left the dark sections a little too bright. Colour was extremely accurate. Initially the picture was a trifle sharp on recent Blu-ray movies, even a little edgy. But it turned out that the ‘Standard’ picture mode had quite a bit of ‘Sharpness’ applied (it was set at 50 on a scale of 100), plus Edge Enhancement as well. Reducing the former to about 20 and switching off EE fixed that.

The Blu-ray player was a little beauty, quite aside from the whole 3D thing. It was the fastest I’ve used: fast to start up, and fast to read discs – typically about 15 seconds to get the picture up on the screen. It did a respectable job of scaling PAL DVDs up to 1080p and worked reliably with all the many Blu-ray discs I used on it.

The player supports a wide range of multimedia, both over a computer network and directly from the Internet, as does the TV. But the wireless connectivity of the Blu-ray player could in many situations make it the more useful source for these things.

As I write, if you want to get into 3D TV, there is only one brand in town: Samsung. It is not perfect, but with the right movies it could be pretty exciting.

Of course, the is virtually no software available at the moment. For the time being, if you purchase a Samsung 3DTV you also get a couple of sets of 3D glasses and a proper copy of the 3D version of Monsters vs Alienson Blu-ray. To watch this you will also need to buy the Samsung Blu-ray player.

In the second half of the year, though, there should be more choices, both of hardware and software. The Blu-ray 3D specification is not proprietary, so all 3D equipment should work with each other, and the large number of 3D movies shown in recent years in the cinema should make it fairly rapidly to 3D Blu-ray, so the future for this enhanced form of viewing looks very promising indeed.