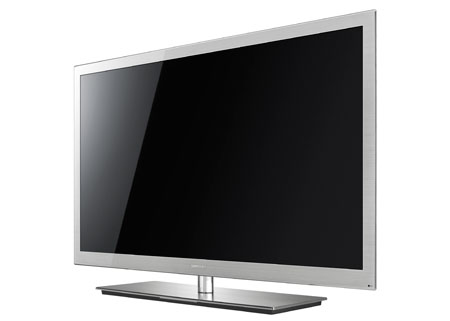 At $10,000, the Samsung UA55C9000 costs more than twice what an otherwise similarly specified, similarly sized, Samsung TV would sell for. So what’s so special about it? We reckon that several of the more extraordinary features justify that price.

So what are regular features, and those that set it apart?

The regular ones are that 139cm (55 inch) Edge LED full high definition panel, the extreme connectivity (2 x USB plus Ethernet plus WiFi via a USB and the supplied dongle), plus Internet TV and multimedia access to network resources and USB content.

Then there are the features that are rapidly becoming regular ones: support for recording and time shift, just by plugging an inexpensive USB HDD into the USB socket.

And 3D TV. Yes, I think 3D is going to become a very common feature over the next year or so. To facilitate this, you get one pair of Samsung 3D glasses in the box. Unlike those with the last Samsung 3D TV we looked at here, this pair doesn’t use a built-in rechargeable battery, but an inexpensive button type cell. That makes it a touch more expensive to run (Samsung reckons they’re good for 50 hours) but easier to manage, since you don’t need to muck around with USB charging cables.

Finally, there are the truly advanced features. The first is the panel thickness. Samsung says that the TV, without the stand, is 33.9mm thick, but that is only at the thickest point. Something like 80 percent of it is only 8mm thick. Let me repeat that: 8 millimetres.

The back and bezel are finished in an attractive brushed aluminium, presumably in large part to give the TV sufficient structural strength.

The stand is pre-attached, and can’t be removed because it has the TV’s speakers and tuner and connections built in. It also has the limited set of direct panel controls. These are on a small panel that winds out from the bottom of the stand when you touch its front edge, and is drawn back in again after a few seconds.

The other advanced feature is the TV’s remote control.

Actually, you get two remotes. One is an extremely simple ‘pebble’ remote, providing just volume, channel changing and power.

The other is the best remote I’ve seen. It works via infrared or a WiFi connection. No, you don’t need a wireless network. Just use the WiFi dongle in one of the USB sockets (you get all kinds of angle benders and extension cables with the TV).

Now ‘best remote’ is a big call. What makes it so special? Two things. The first is that if you switch on a device with HDMI CEC support (ie. a device that can control, or be controlled, via HDMI) that’s plugged into the TV – or into a CEC supporting home theatre receiver into which the TV is plugged – the remote will learn its functions automatically and give you excellent control over it.

I plugged in an Onkyo home theatre receiver, and the remote gave me an icon automatically, with input selections and volume control, just like that. Likewise, the unit recognised a Blu-ray player plugged into the Onkyo, so I could call up its play, pause and other controls.

The second thing: remote TV. With a WiFi connection, the remote can display on its 75mm screen whatever you’re watching on the TV. Even Blu-ray. If you have the player plugged directly into the TV so that it is playing the sound, the remote can deliver that too, via a tiny speaker, or through the built in 3.5mm headphone socket.

Furthermore, you can set the remote control to display a TV station that the TV isn’t even tuned into, even if the TV is showing a different station.

As to the TV itself, it includes Samsung’s Motion Plus 200 hertz smoothing for 2D TV, and this does a nice job. Out of the box, the ‘Sharpness’ control was set too high, but dragging this down to about ‘10’ cleaned up the picture nicely. Otherwise, the default settings were pretty good.

The blacks were a touch uneven when I was watching dark material in a dark room, with the picture being a little too light at the extreme left and right. Presumably that is because the Edge LED ‘backlight’ has to be packed into such a confined area. That they manage to even get the glass and LCD panel in is pretty amazing.

The 3D performance actually seemed noticeably better than with the earlier 55 inch Samsung we reviewed (issue 29 / Winter 2010), with much less ghosting, even on the problematic Golden Gate Bridge scenes from Monsters vs Aliens3D. The 2D to 3D conversion capability of the TV was surprisingly good on HD material, especially sports on One HD.

This is a highly advanced TV, that offers a stack of premium features. I would prefer a slightly thicker panel, myself, if it were to give more even black levels.

But that’s a trade-off that many would be prepared to make. And given the sheer elegance of this TV’s appearance, and the cleverness and power of its features, even for me the balance would be very close.