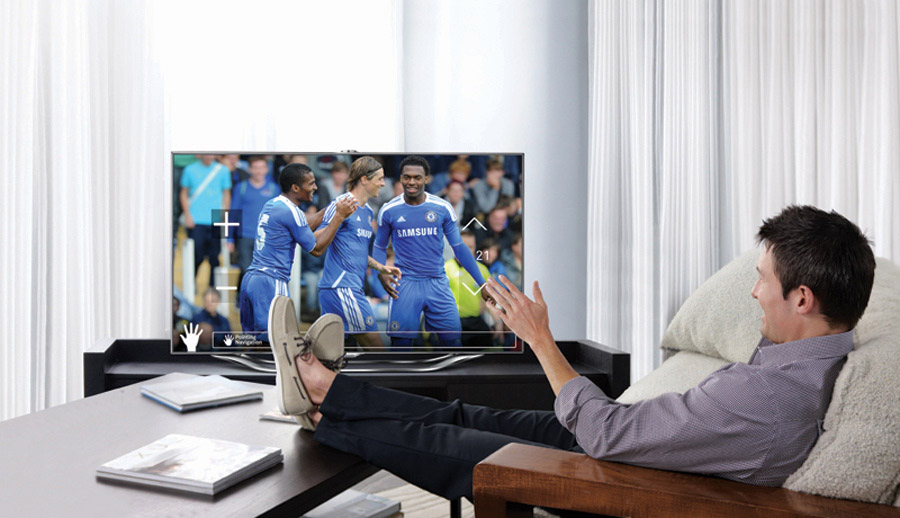 Picture performance with this TV is an evolutionary, rather than revolutionary, improvement over last year’s Samsung range. Blacks – already good – are a touch deeper. The colour was accurate and most of the switch-on settings were excellent. I wasn’t keen on the Sharpness control being up at 50. Dragging this down made the picture smoother.

Samsung backs active shutter 3D technology, and the effects were excellent. There was a little leakage from time to time of content intended for one eye to the other, so sometimes there was some ghosting, but for the great majority of material the 3D effect was deep, detailed and extremely impressive.

You have a wealth of control options with this TV. The standard IR remote, for one, and the Smart Touch remote discussed above. But the most interesting were the new options: motion control and voice control. The latter is prefaced by you saying ‘Hi TV’ to let it know that you want to do something. It shows a list of available commands across the bottom of the screen, some of which have their own sub-commands. So you can say ‘Source’ and then ‘HDMI 2’ to switch over.

This worked a bit unreliably with the TV installed in a home theatre system, where large and capable loudspeakers are competing with any commands you may say. But you can also use the microphone built into the Smart Touch controller to great effect.

The motion control function was pretty cool. You wave your hand to the side of your head and the TV displays an arrow on the screen which moves as your hand does. Point it at a Smart Hub item and grip your hand, and you’ve selected that item. Choose the channel or volume selectors that appear on screen and you can change them.

These new features are, well, new. So they sometimes didn’t work as expected – and the motion one didn’t work at all in a dark room for obvious reasons. Occasionally, for no obvious reason, the TV thought it had heard or seen something that I hadn’t done, and would bring up the relevant onscreen control instructions.

Still, these are promising inclusions, and handy for when you can’t locate the remote control, or have pizza hands and don’t want to touch the remote. We certainly see interaction feature like these becoming better and more useful as Samsung releases further firmware upgrades, but are they the beginning of an entirely new way for people to control their televisions? Maybe.

The Samsung US55ES8000 is a beautiful-looking TV with at the very least as much network capability as anything on the market, and far more than most.

The Internet-based content offerings are solid, providing a wide range of choice for expanding viewing options beyond the broadcast schedule of TV networks. It delivers great picture quality in 2D, good quality in 3D, and while its suggested new modes of control work reasonably well for now, with development they may prove indispensable.