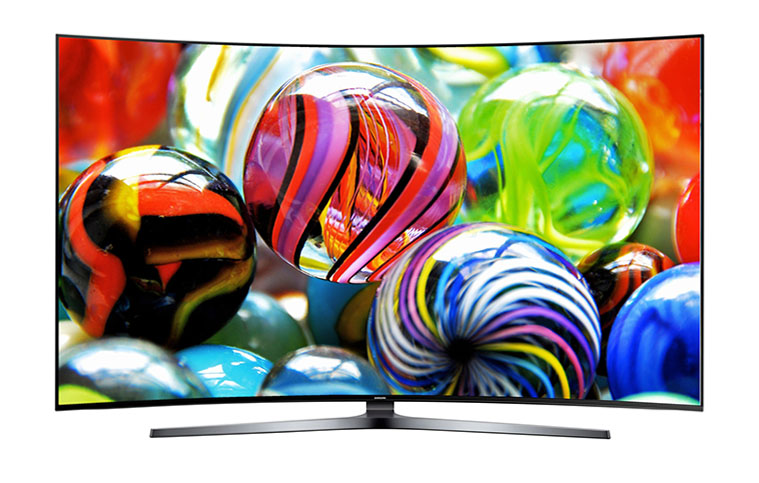 Do you think I should forgive Samsung? For some reason, it refused to ship its 88 inch behemoth of an SUHD TV, the Samsung UA88KS9800W, to my city for review. Perhaps the $29,999 ticket price had something to do with it.

Well, instead it took me to the TV, putting me up in a nifty hotel room in Sydney to check it out, along with the Samsung HW-K950 soundbar (reviewed here) and the Samsung UBD-K8500 UltraHD Blu-ray Player.

Now you don’t quite realise how big an 88 inch TV is until you stand in front of it. It’s a monster. Turning that into Australian, it measures 223.7 centimetres on the diagonal. That’s the official measure. I didn’t whip out the tape measure myself – I didn’t think to take one, and even if I had the fact that this is a curved screen would have made measurement difficult. Samsung specifies the screen as having a curvature of “4200 R”, which I take to mean that its curve conforms to a section of the circumference of a circle 4.2 metres in diameter.

The TV panel is quite thick – I’d say close to 50mm – all the way around. A panel this big clearly needs a strong chassis to ensure that it doesn’t flex to the point of shattering glass. Despite the size and apparent weight (65 kilograms, including the stand, say the specifications, or 59 kilograms without), it sat comfortably on what looked like its spidery stand, secured only at the centre. It does not swivel and was secure enough to resist rocking from side to side. Closer inspection revealed that the stand is only spidery by comparison, while its pedestal looks solid enough to mount a howitzer.

The gun-metal grey bezel was angled in towards the screen and I estimated it at about 15mm wide on all four sides. This TV presents you with a lot of picture and not much else.

There was a standard IR remote provided in the room but given, as we’ll see, the lack of availability of smart features in the review setup, the lack of any kind of smart control was not a problem. However, if I understand the specifications correctly, it does indeed come with a smart remote which also provides voice control.

(Samsung was one of the companies which, a couple of years ago, was leading the way in gesture control. Nowadays none of them support this, nor built cameras into their TVs, so I guess that feature was rejected by consumers.)

Obviously I didn’t get to set the TV up, not that there was much setting up to do.

I imagine that the TV’s smart features are excellent. Samsung’s very good at that kind of thing, and with its Tizen operation system, there’s no reason why they shouldn’t be top notch. But of course I couldn’t check them out because there was no usable Internet. The hotel used a web interface for logging on. TVs and computers are smart enough to open the hotel’s web page once you make the WiFi connection. Smart TVs are very smart, but not that smart. I’d been kind of looking forward to checking out screen mirroring for one thing, but no network, no go.

In fact, I couldn’t check out any of the apps because to go to that page required me to accept the user agreement, and when I tried to do that the TV said it had to download it, but because there was no Internet …

(The UHD Blu-ray player was equally unconnected, but not insistent about me agreeing to anything, so I was able to use its screen mirroring function, and both my phone and my Microsoft Surface Pro 4 connected to it quickly and reliably. I hope that’s replicated in the TV because there was something strangely satisfying seeing the computer’s screen mirrored to this mighty display.)

Nor was there an aerial connection (no great loss) so I was pretty much limited to using the Samsung UltraHD Blu-ray player as a source. There was a nice collection of UltraHD discs and of course I brought along a few of my own.

My own standard test discs disclosed that the automatic progressive scan conversion from 1080i50 (a few Australian Blu-ray discs, but of more importance when it comes to HDTV) was so-so. It was automatic, but far too inclined to slip into video mode when it had the slightest excuse to do so, producing some on screen artefacts. There seemed to be no difference between the Auto1 and Auto2 Film modes. No doubt they make a difference on 1080i60 signals. I could not check 576i50 because the Samsung UHD Blu-ray player didn’t support that output resolution.

The “Sharpness” control defaulted to 50 out of 100 as is Samsung’s wont. That was way too high of course, but Samsung seems to have been working on its Sharpness algorithms these past few years, reducing the amount of ghosting they induce, so for the most part the damage this was limited to visible jaggedness on diagonals and circles. I suspect that had this been a 65 inch TV, and certainly a 55 inch TV, this would have been virtually unnoticeable. But 88 inches is like looking through a magnifying glass, showing all the glorious detail, and mercilessly revealing any defects. It was better to turn this down to perhaps 25 or less. Normally I’d recommend a zero, but again a screen this big can seem a bit fuzzy with anything less than at least full HD, so a little artificial sharpening can help.

Another problem became apparent when watched the remarkably mediocre alien invasion movie “The Fifth Wave” on UltraHD Blu-ray. Right at the start the star is walking up, carefully and well armed, to an abandoned shop in what you tell at a glance is some kind of end-of-the-world scenario. There’s a brief view following her, panning to the right, through a bullet-starred window. And there were these ghostly lines appearing parallel to the cracks in the glass. Then there’s a low rear shot following her, and the gravel of the road at the foot of the screen dissolved into water. No, they weren’t special effects. They were caused by the TV’s Auto Motion Plus motion smoothing system, which was set to ‘Auto’, messing with the image in its attempts to turn two frames into several in order to eliminate jumpiness in the picture. There’s a manual system though. I’d suggest no blur reduction and just a little judder reduction to get things decent without producing distracting distortion.

My, what a big picture we have here though. Huge. Noticeably bigger than my projection screen at home. And with a colour intensity – not to mention the ability to produce a great picture under room lights – that a projector can’t really match. The detail delivery was first class, which made the disaster scenes at the start of “The Fifth Wave” really quite unconvincing, since the second rate CGI was revealed with laboratory precision.

The black levels were reasonable, and the localisation of the lighting was very good. On a couple of scenes – with the hotel room’s lights completely off – there was a little unevenness in very dark scenes, but that aside the picture was strong. The colour delivery was bold and impressive. Green grass and forests positively glowed in a way that is generally not apparent with other TVs. Samsung says that the pixels in its SUHD screens are fully capable of ten bit performance, which means over a thousand levels for each colour rather than less than 250, which in turn means a billion colours overall.

It certainly looked like it with the discs I had. The Quantum Dot technology also helps Samsung TVs deliver very precisely tuned colours.

Obviously the Samsung UA88KS9800W SUHD TV is not cheap, but how many TVs can give a projection sized display that works even in a well lit room? If you’ve got something approaching the money, check it out.