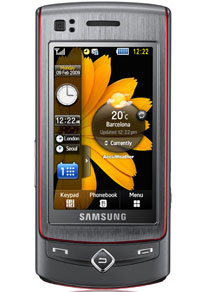 With the looks of a sleek sportscar crossed with a supermodel clad in black, the Samsung UltraTouch is instantly recognisable as the latest entrant into the fashion phone arena. It’s slim and polished, lengthy and leggy with a cool metallic face, and comes with a long, bright touchscreen interface – but as is the question with all catwalk models, does the Samsung UltraTouch have any brains behind that perfect exterior?

The UltraTouch is a fully fledged 7.2Mbps 3G mobile, with everything you expect in 3G – video calling, picture messaging, web links to Facebook and YouTube, web browser, and the list goes on. Most 3G phones have these features, but few 3G phones have Samsung’s custom touchscreen firmware which has appeared on their last few handsets.

The touchscreen interface is eye-catching and will attract many, but it needs to be said straight up that it’s far from perfect. The home screen is customisable with your preferred widgets – clocks, calendar, MySpace, music player, picture browser and the rest – but it feels cheap. Widgets are selected from a scrollable side-bar and slid with a fingertip onto the ‘desktop’, but every movement comes with a niggling delay which makes the device feel like it’s underperforming. The menus themselves lack the sleek, beautiful design which the UltraTouch has on its exterior. Thankfully, menus are easy to navigate and simply laid out, but can’t compare to the device’s exquisite body.

The camera is a major seller. 8 megapixels, powerful flash, video capture, and tonnes of options like panorama and smile shot – it’s up there with the best camera phones from the likes of Sony Ericsson and LG. Also, most camera phones of this quality tend to be fairly chunky in design – Samsung have created a beautifully slim body for such a hefty camera. Unfortunately, when it comes to reviewing your pictures, the device lacks a powerful enough processor so sifting through the image gallery is cumbersome. It’s a shame that reviewing your pictures isn’t as joyful an experience as taking them.

Other features are passable but not as perfect as the camera. The music player is functional but like the menus is dated in appearance, and for a media-centric device like this it’s a sin to lack a 3.5 mm headphone jack – you’ll be forced to use Samsung’s headphone lead to attach your own earbuds to. Most mobile web browsers have become pretty easy to use in recent times – the UltraTouch’s is not. You won’t want to use the browser for anything more than the most rudimentary tasks, and even then it’s not a gratifying experience.

The UltraTouch’s price tag puts it in the league of other camera phones from LG (like the excellent Viewty) or Sony Ericsson, or other ‘bling’ mobiles like the LG Prada, or Apple iPhone. If you’re most concerned about good looks, the UltraTouch might be worth your money thanks to the excellent camera, and the funky touchscreen. Performance-wise, it lacks the grunt and media-savvy firmware of the iPhone, but has similar features in a less usable form. Basically you’ll find many of the same features in much cheaper handsets, but you won’t find the slim body or powerful camera.

Like the catwalk models, the UltraTouch has looks to die for but lacks the brains to match. If you love the attention you’ll get from its slick body and innovative interface, you’ll be satisfied with the UltraTouch which wins for design and new ideas. If you’re more concerned with functionality, you’ll likely be disappointed, because the UltraTouch loses points for its dated browser and poor image gallery, and the constant feeling it needs more power under the hood.

Overall then, somewhere in the middle of the road.