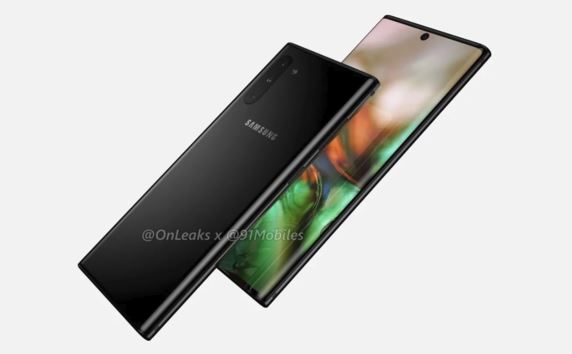 One of the tech media’s more anticipated events is the annual launch of the Samsung Galaxy Note series. The Galaxy Note10 will be unpacked in New York on 7 August.

Why is the Galaxy Note10 more anticipated? Well, for starters the Galaxy Note series has a stylus – S Pen to be precise. We journos love being able to leave the A6, recycled paper, Spirax notepad and a pen behind and write on the screen. Just as we love loading Samsung Pay with all those pesky wallet-stuffing credit and loyalty cards.

And another reason is that a mid-year launch means it has had time to incorporate all that bleeding-edge, now leading-edge tech. Its camera, processor, memory, storage will be the latest making the Note10 the one to have.

Back in April, we wrote an article ‘Samsung Galaxy Note10 – all the rumours” (here). It’s a good read, and we hope still accurate, but we need to add some extra rumours that have since surfaced.

The battery will still be about 4,000mAh, but battery life will be significantly improved due to the Qualcomm or the Samsung Exynos powerhouse, power-sipping, SoC. And it may have 45W fast charge (15W at present)

Modem-wise its too early to use the Qualcomm X55 so it will get the X50 as per the Galaxy Note10 5G. But in Australia, we get the Exynos version, and it appears to be the new 7nm Exynos 9825 which is closer to next year’s flagship SD865. Samsung has not even announced the chip’s specification yet – and we would have been happy with the predecessor Exynos 9820!

Camera-wise its definitely a version of the Galaxy 10 5G which has tied at 112 with Huawei’s P30 Pro for the best camera in DxOMark tests. But the secret sauce may be a three-step variable aperture that would blitz the competition. Oh, and the camera appears to be on the left top rear now.

And the S Pen looks like it may get a camera – there is not a lot of space in an S Pen so don’t hold your breath.

You can watch the live stream here