Samsung updates the Galaxy Note and introduces a smarter camera 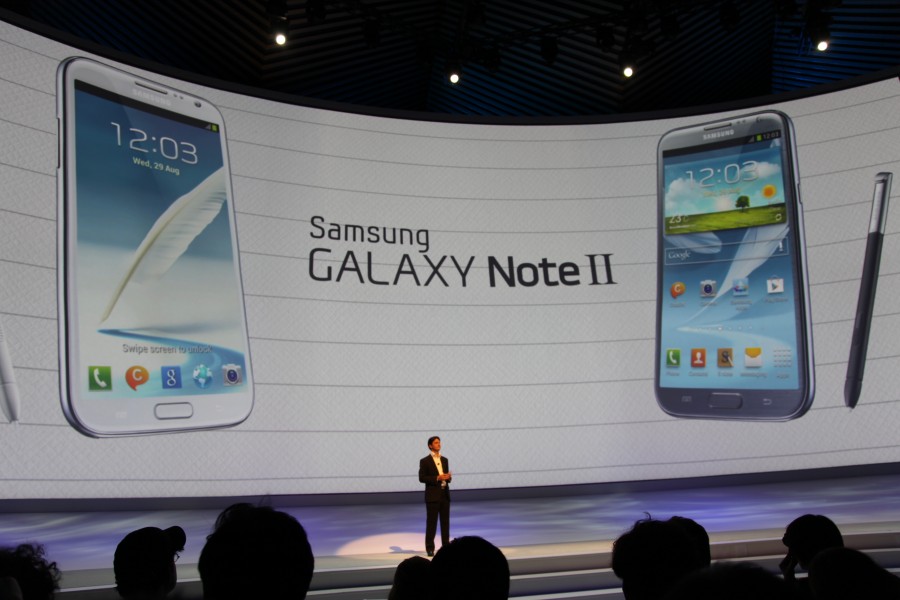 Samsung has unveiled its latest mobile products to an eager crowd at the Samsung Mobile Unpacked 2012 event in Berlin.

After a brief recap of the recently launched Galaxy Note 10.1 tablet, the first new product announcement began with the Samsung Galaxy Note II, which aims to build the success of the niche-forging Galaxy Note version 1. Like its predecessor, the Note II includes a stylus and touch sensitive screen, and is designed to enable users to “unleash their inner creativity” through a number of pen-driven applications.

The top line improvement for the Galaxy Note II is its larger display, growing from 5.3 to 5.5 inches. The Super AMOLED display is both “brighter and sharper” than the previous model, with an HD resolution of 1280 x 720 pixels.

The Note II’s insides consist of a quad-core 1.6GHz processor, 2GB of memory, 8 megapixel rear and 1.9 MP front facing cameras and a 3100mAh battery. The case styling has now moved in line with the Samsung Galaxy S III, and the unit weighs 180 grams and is 9.4mm thick.

Running the latest Android Jellybean 4.1 operating system, the Note II includes a number of new interface tweaks designed to make the most of the pen-based interface. Air View, for example, enables users to ‘hover’ with the S Pen above an email, image gallery, S Planner or video to preview the content without having to open it. The Popup Note features instantly transforms the Note II into a handy note pad, and quickly opens an S Note anywhere on the screen. The new gesture pad feature, called Quick Command, lets users quickly activate frequently used apps, such as email or maps, with the S Pen.

The Galaxy Note II will come in 3G and 4G variants, although Samsung has yet to confirm that the 4G version will work on Australian 4G networks, and is expected to reach stores in Australia in October.

Following the Note II, Samsung raised a few eyebrows with the announcement of the Galaxy Camera. Designed with “…Camera features you can’t find on smartphones, and smartphone features you cant find on cameras,” the Galaxy Camera features a powerful quad-core processor and runs the Android Jellybean 4.1 operating system. This makes it possible to run and 3rd party applications, even simultaneously, and apps such as Skype and other image sharing tools can be downloaded via the Google Play or Samsung Apps stores.

The Galaxy Camera features a large 4.8 inch AMOLDED screen, which provides plenty of detail for reviewing photos, and a versatile 21 x optical zoom is included.

Using the Smart Pro mode, the Galaxy Camera claims to “take a shot that rival professional photographers”. To accomplish this, the camera adjusts settings based on the desired look, and includes a range of modes including:

The Galaxy Camera’s 16.3 megapixel sensor also records video and features a 120 frames per second slow motion mode, as well as a voice control system for snapping shots or initiating the timer without touching the unit.

A clever photo sharing widget is provided for sharing photos by consolidates your social networking feeds into a single, easy to manage, application.

Connectivity is very impressive with support for both 3G and 4G cellular networks as well as WiFI with Dual Band and Channel Bonding for extra speed.

Samsung has yet to announce Australian pricing or availability dates. We’ll update this article as soon as this information is available.

More to come with Windows 8

In addition to the Galaxy Note II and Galaxy Camera, Samsung also announced its new ATIV range of Windows 8-equipped tablets, notebooks, all-in-one PCs and Smartphones. We’ll be covering the new ATIV range in greater detail so stay tuned to GadgetGuy.com.au for our in-depth report.